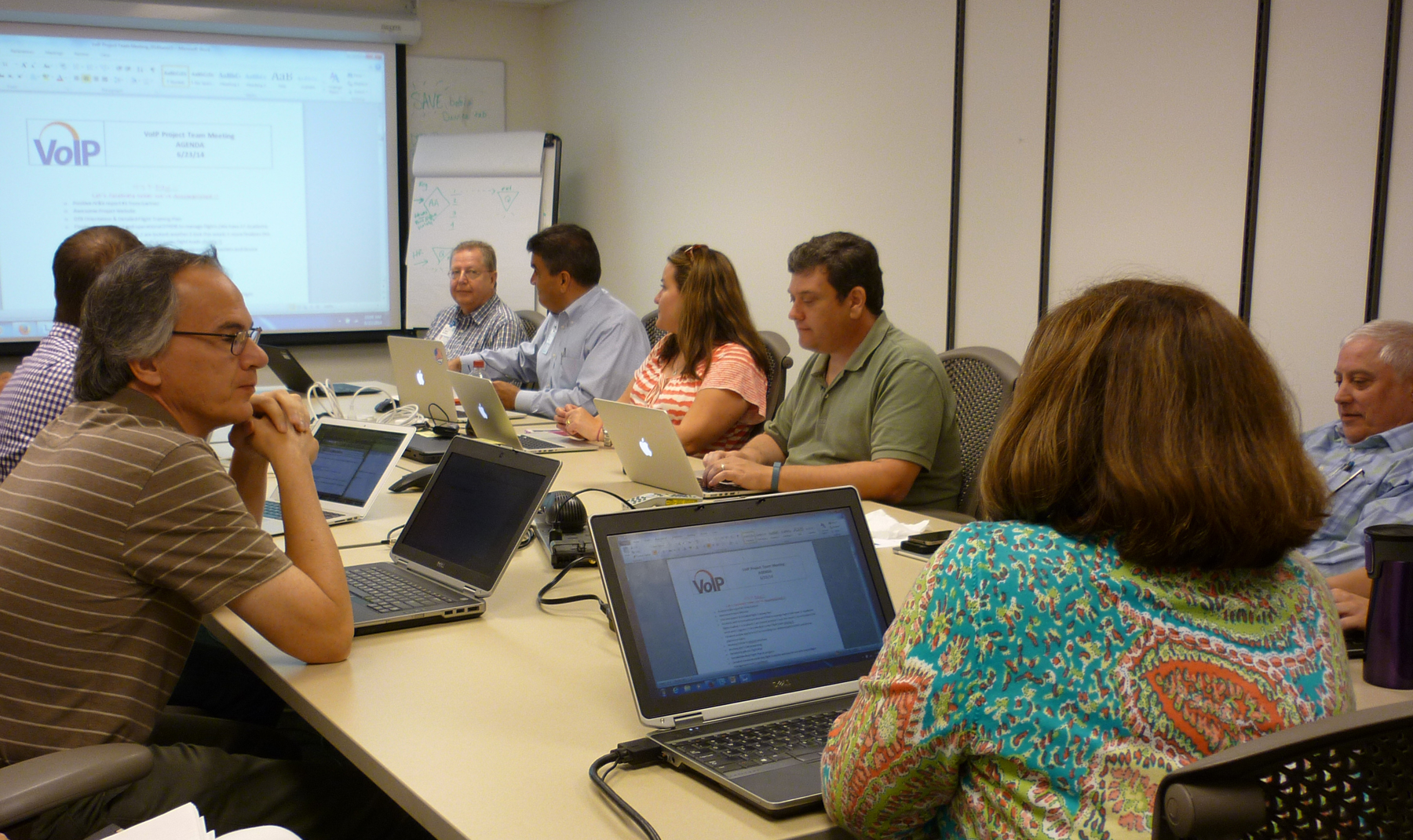 Rayshon Tibbs spends a lot of time on the phone. It just goes with the territory in her job as the human resources consultant for Information Technology Services, the University of Virginia’s central IT department.

Last week, her life got a little bit better when she came into the office to find her newly connected VoIP  – short for “Voice over Internet Protocol” – phone sitting on her desk.

Six months into its nearly 21-month implementation, the University’s VoIP project reached a major milestone June 23 when the first 113 telephone lines were migrated to the new University telephone system and 79 of the old-style Siemens phones were replaced with modern, state-of-the-art Polycom VVX phones for the first pilot group. The phones are new, but existing telephone numbers remain the same.

Tibbs got down to business with her new phone that morning.

“I followed the Quick Reference Guide that came with my phone and went through an online video, quickly set up a few things, and I love it!,” she reported, “especially being able to take other calls while I’m on the phone. It could be the call I’ve been waiting for all day. The clarity of people’s voices is amazing. And sending my voicemail message to email – wow, where has that been all my life?”

ITS staff working in Carruthers Hall were chosen specifically for the VoIP pilot so that “we can eat our own dog food,” explained Dana German, senior project manager and the person in charge of making sure all the project’s “i’s are dotted and t’s are crossed.”

“We want to make sure we experience the full impact of this transition ourselves,” she said, “so we can fix any glitches and make it as seamless as possible for the rest of the University.”

The phased VoIP migrations are scheduled building by building across Grounds – starting in areas of the Academic Division this June, followed by the Medical Center in September – finishing in the fall of 2015. By the time the project is completed, ITS expects to replace approximately 20,000 of the old phones, which are powered by technology that dates back almost two decades.

The actual building switch-over is the final step in the VoIP transition “flight plan.” Each flight begins roughly 60 business days in advance of the scheduled change, known as a “cutover,” when the departmental telephone representative begins verifying and collecting critical data, including the specific VoIP phone model that will sit in each employee’s workspace. The representatives have a very important role in the project, as they are responsible for documenting and verifying information about each telephone number and phone – along with any special business-related requirements – to be migrated to the new system.

About two weeks ahead of each flight’s cutover date, new VoIP phones land on each desk, but aren’t actually functional until that final day.

Last week’s cutover lasted late into the night, but the few wrinkles that came up were ironed out by the end of following day, ITS officials said.

The next groups to make the switch – including the remainder of Carruthers Hall, the Michie North and South buildings, the Dynamics Building on Ivy Road, Bryant Hall and Scott Stadium – are scheduled for phased cutover between July 8 and July 24, followed by courtesy phones and other non-student phones in residence hall buildings, which are slated to be working in early August.