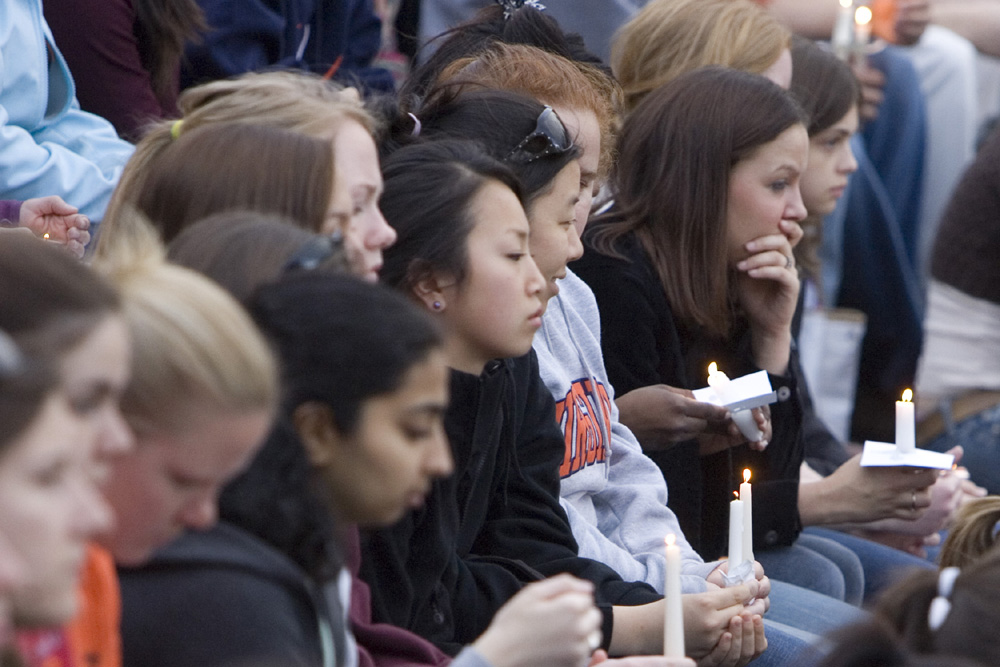 At a candlelight vigil honoring those who were killed and injured at Virginia Tech, University of Virginia President John T. Casteen III told members of the U.Va. community Tuesday night that the world can be unpredictable and inscrutable. But Casteen als

April 18, 2007 — At a candlelight vigil honoring those who were killed and injured at Virginia Tech in Monday's shootings, University of Virginia President John T. Casteen III told members of the U.Va. community Tuesday night that the world can be unpredictable and inscrutable. But Casteen also exhorted the students to continue moving forward to change the world.

"Tonight we come together as a community to talk, meditate and mourn,” Casteen told the crowd that overflowed McIntire Amphitheatre. Students, many of them dressed in Virginia Tech’s maroon and orange colors, carefully held candles that were guttering in the evening breeze.

While the deadly shootings occurred in Blacksburg, Casteen said the event affected the U.Va. community in profound ways. One of the slain Tech professors has a daughter attending U.Va., Casteen said. A professor who had moved from U.Va. to Tech in 2003 was among the dead. One U.Va. student lost her sister, while another lost a cousin.

Universities are protected places with a commitment to openness, he said, and because of the permeability of their borders, they are virtually impossible to seal off, especially if they value open inquiry, discovery, teaching and learning.

Despite the grief the U.Va. community is feeling, Casteen said there are practical matters to address. While university populations are inevitably vulnerable, U.Va. and many other institutions around the country will re-assess their procedures in light of the Tech situation. U.Va., he said, has been exploring ways to notify the University community in times of emergency.

Casteen urged students to talk to one another, as well as faculty, staff and parents. He told students to stay in touch with loved ones and not to be embarrassed by their grief.

And he urged them to report anybody they thought to be suspicious, irrational or threatening.

Casteen had attended a convocation at Virginia Tech earlier in the day, a gathering he described as “somber but assertive of life.” He told the students the Virginia Tech community  “faced loss but continued to work together.”

Apart from accepting the irrationality of life, Casteen said students need to train their minds to change the world and make events such as this shooting rarer and rarer.

Students appeared to be touched by Casteens remarks.

“It is rare to see people in power who can relate to you in something like this,” said Katie Serlemitsos, 18, a bio-chemistry major from Annapolis, Md. She said in an irrational world, people cannot be prepared for everything.

Danielle Rivera, 18, a chemistry major from LaPlatta, Md., agreed with Casteen that universities cannot be closed off and that no measure of security could prevent all hazards.

Serlemitsos said the shooting “put a shadow on the campus,” but despite this she tries to appreciate life as much as she did before.

Vetan Kapoor,  18, from New Delhi, India, stood by himself after the ceremony, cupping his hand around his candle to protect its flame.  He said Casteen’s remarks “meant a lot to me as a student.”

He did not understand why the shooting happened, he said, and he did not know initially what to think about it. He was scared because it happened so close to home.

“Knowing that so many people care helps me come to terms with what happened,” he said.

Kapoor was raised in India and is familiar with terrorist attacks. Two years ago there was a terrorist strike five minutes from his school. But that was driven by an ideology. The apparent randomness of the Tech shootings makes it harder to accept.

He is also aware of how the shootings have touched him. He said he initially felt removed from the events since he did not know anyone who went to Tech. But as the details emerged, many of his professors knew a colleague who was killed. And Umphres said he had recently attended a talk given by one of the other slain Tech professors.

Following Casteen’s remarks, students were invited to sign large posters, which will be sent to Virginia Tech. Students milled around the amphitheatre, some waiting to sign a poster,  others still holding candles. Some were sitting and talking and one group sat in a circle, joined hands and prayed.

After the vigil, the Kaleidoscope, a facility in Newcomb Hall, was opened as a space where members of the community could reflect or spend time together.  Staff from the Counseling and Psychological Services and Office of the Dean of Students were available.

In addition to the vigil, the U.Va. community has responded in a variety of ways to Monday’s shooting at the Virginia Tech campus.

“It touches my heart to see how strong our community is and how quickly we come together in times of need,” said SBA President Brian Leung. “We saw it last year with Hurricane Katrina. We are seeing it again now.”

Undergraduates will launch a campaign of writing letters to the families of the deceased students, starting at 4:30 p.m. Thursday at Pavilion III.

The Faculty Senate executive committee issued a statement of condolence for the Tech community.

“We want you to know we offer our hands to hold, our ears to listen and our hearts to feel as you work through your grief,” the statement read in part. “We recognize that this tragedy could have taken place anywhere and we pledge to work with you to protect the innocent and to prevent similar events in the future.”

Patricia M. Lampkin, vice president and chief student affairs officer, advised students to talk to one another about the tragedy and to seek professional help when necessary. She noted that many U.Va. students had siblings, relatives, friends and neighbors at Tech.

“We are collectively grieving for the lost lives of students, faculty, and staff; for the waste of youthful potential and precious talent; and for the victims’ family members and friends whose lives have been shattered,” she said.

The School of Nursing is holding a session at McLeod Hall Auditorium at 10 a.m. Wednesday for classmates of nursing student Randa Samaha, whose sister was slain in Blacksburg.

Adjunct orthopedic professor Kevin Granata was among the dead at Tech. Granata taught at U.Va. from 1997 to 2003 before going to the Engineering Science & Mechanics department at Virginia Tech.

The Sustained Dialogue student organization has postponed from Tuesday to  Monday, April 23, De-Stereotype Day, when students, faculty and staff wear T-shirts with their own handwritten messages aimed at defying stereotypes. The “Gay? Fine with Me” campaign, which had been set for Tuesday, will also be rescheduled.

The U.Va. and University of Richmond baseball game at Davenport Field was delayed Tuesday night until 7:10 p.m. After the chapel bell tolled, there was a moment of silent remembrance before the national anthem.

Monday night, U.Va. students painted Beta Bridge on Rugby Road in Virginia Tech’s maroon and orange colors, with a reminder of last night’s vigil on one side and “Hoos for Hokies” written on the other.

U.Va. chapel bells tolled for five minutes at 2 p.m. Tuesday when Virginia Tech was holding its convocation in Blacksburg.

Ribbons in Virginia Tech’s colors were distributed on Grounds and a Hoos for Hokies memorial fund has been established to honor those killed in the shooting.

“Our hearts are with Virginia Tech and its many families today,” Casteen said Monday in a statement on the shootings. “Our thoughts and prayers belong to those who must deal tonight and in future days with a grief that must seem almost more than mind and spirit can bear.”

U.Va. offered Tech support and assistance, including psychological support services and medical assistance. Casteen said U.VA would stay in close touch with Virginia Tech officials as they work to “restore the Tech community.”

Casteen also advised U.Va. students, faculty and staff to listen to and talk  with each other. “Few deal easily with shock and grief in isolation,” he said.

He advised students to make use of support services, such as Counseling and Psychological Services, dormitory residence staff and the Dean of Students office.

U.Va. Counseling and Psychological Services will offer two drop-in groups for members of the U.Va. community who wish to discuss their reactions to the shootings. These sessions will be from 7 to 9 p.m. Thursday at the Newcomb Hall Board Room on the third floor, and 3 to 5 p.m. Friday at Cabell Hall room 247.

Assistance is available for faculty and staff through the Faculty and Employee Assistance Program at 243-2643.
—by Matt Kelly

When Less Is More: How Harnessing the Power of Subtraction Can Add to Life END_OF_DOCUMENT_TOKEN_TO_BE_REPLACED