University of Virginia Prepares for 2008 Graduation Weekend, May 17-18 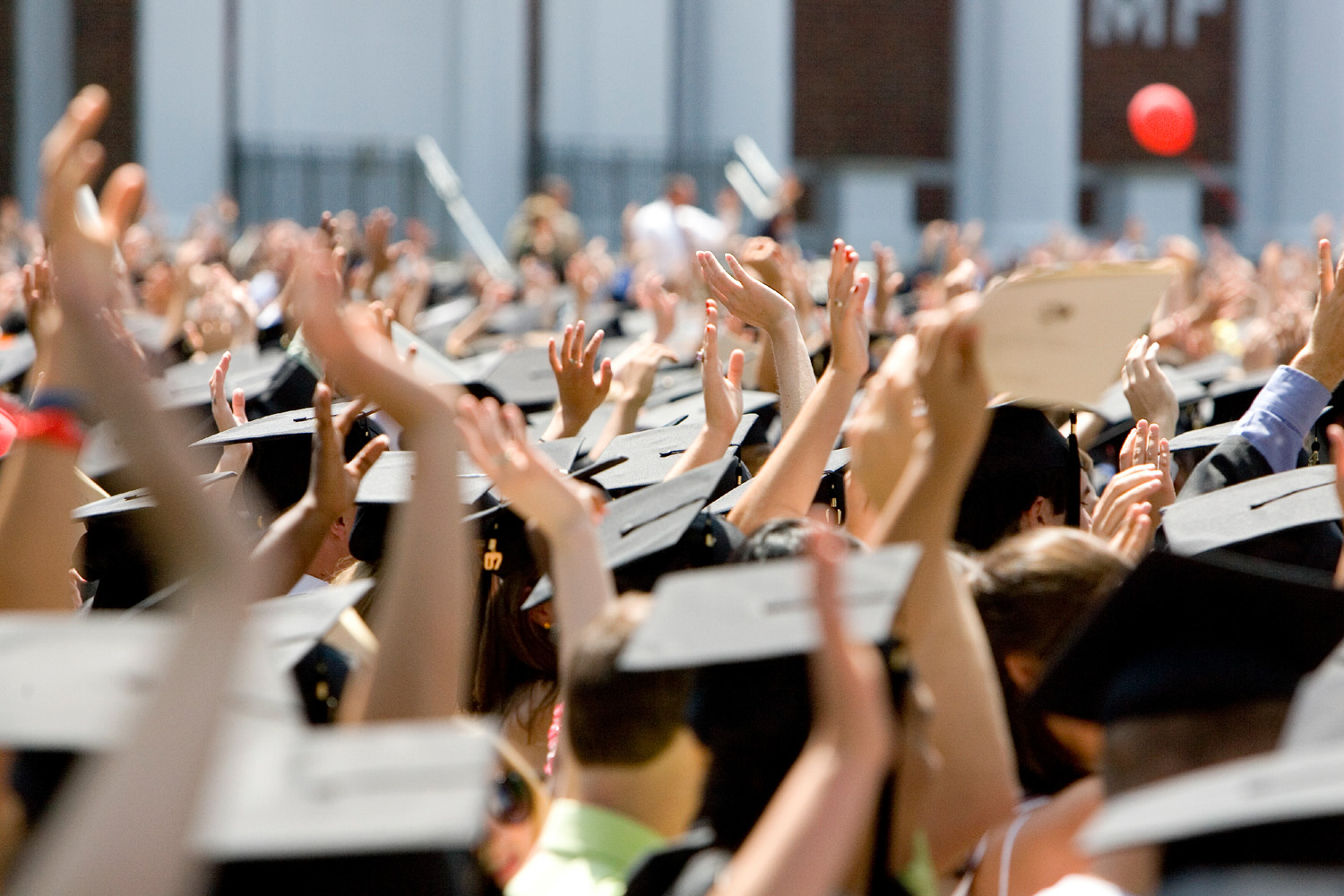 Hunter R. Rawlings III, three-time university president and a respected national leader in higher education, will give the commencement address at the 179th Final Exercises on Sunday. Rawlings will speak on the Lawn following the traditional academic procession, scheduled to begin at 10 a.m. After the Lawn ceremony, degrees will be handed out at diploma ceremonies held throughout the University.

Sheila C. Johnson, chief executive officer of Salamander Hospitality LLC and a global ambassador for CARE, will speak at Valedictory Exercises on Saturday at 11 a.m., also on the Lawn. The event includes the announcement of class awards and the presentation of the class gift.

Other public events, all on Saturday:

• The Virginia Glee Club Finals Concert, 9:30 p.m., Old Cabell Hall Auditorium. Degree candidates admitted free, but must have tickets. General admission tickets are $15 ($5 for students, and are available at Mincer's, Newcomb Hall Ticket Office (through Friday) and at the door.

• Hunter R. Rawlings III will speak at Final Exercises. A native Virginian, Rawlings is currently in his second appointment as a visiting University Professor in classics, having also taught at U.Va. in the spring of 2005. He remains a professor of classics and history and president emeritus at Cornell University.

Born in Norfolk, Rawlings graduated from Haverford College with honors in classics in 1966, then earned a Ph.D. from Princeton University in 1970. He joined the faculty at the University of Colorado at Boulder, rising to full professor in just 10 years. In 1984, he was appointed vice president for academic affairs and research and dean of the graduate school at Colorado, where he remained until becoming Iowa's president in 1988.

He was elected a fellow of the American Academy of Arts and Sciences in 1995.

• Sheila C. Johnson will speak at Valediction. A resident of Loudoun County, Va., Johnson is an entrepreneur whose accomplishments span the arenas of hospitality, sports, TV and film, and an impassioned philanthropist serving arts, education and humanitarian causes.

As CEO of Salamander Hospitality LLC, a company she founded in 2005, Johnson oversees a growing portfolio of luxury properties and lifestyle businesses. As president and managing partner of the WNBA's Washington Mystics and a partner in Lincoln Holdings LLC, Johnson is the first woman to have a stake in three professional sports teams, including the Washington Wizards (NBA) and the Washington Capitals (NHL). She is also a TV pioneer, having been a co-founding partner of BET (Black Entertainment Television).

In 2006 Johnson was named ambassador for CARE, whose mission is to fight global poverty. In this role, she encourages women of all ages to become catalysts for change and vital members of impoverished communities throughout the world.

Johnson pledged $5 million to the Curry School of Education at U.Va. in 2006 to establish a center for human services. The Sheila C. Johnson Center for Human Services will bring together the Curry School's most significant outreach efforts, which serve more than 7,500 children, adults and families a year. Johnson also serves as chairman of the board of governors of Parsons The New School for Design and sits on the boards of VH1 Save the Music, Americans for the Arts and the University of Illinois Foundation.

An accomplished violinist, Johnson received a bachelor of arts in music from the University of Illinois, and also holds honorary degrees from numerous other institutions.

In the case of inclement or severe weather on Saturday, May 17, Valedictory Exercises will be moved from the Lawn to the John Paul Jones Arena.

For Sunday, May 18, the severe-weather plan will be followed only in case of thunder, lightning, high winds or other conditions that make it unsafe to hold ceremonies outside. Rain alone does not constitute severe weather.

Depending upon the weather, the University may decide to hold Final Exercises on the Lawn as planned, but move diploma ceremonies inside. Under this plan, faculty and students and their guests will go to the inclement weather sites designated on the "Diploma Ceremony Locations" chart (available online at www.virginia.edu/majorevents/ceremony.html) for diploma distribution.

If the weather is severe, there will be a central convocation in the John Paul Jones Arena for Architecture, Arts & Sciences, Commerce, Continuing and Professional Studies, Education and Nursing. Faculty and students should arrive at the arena by 9:30 a.m. Graduating students will be seated on the main floor of the arena. Only guests with tickets will be allowed entry into the arena. A limited procession (faculty and the president's party only) will begin promptly at 10 a.m. Faculty should assemble no later than 9:45 a.m. in the Courtside Club located on the lower level of the arena. Rawlings will give the commencement address at this site.

Faculty and students of Darden, Engineering, Law and Medicine and their guests will go to the severe-weather sites designated on the "Diploma Ceremony Locations" chart (available online at www.virginia.edu/majorevents/ceremony.html) for both degree conferral and diploma distribution. Faculty and students should plan to arrive at rain sites 30 minutes prior to the start of their respective ceremony.

Alcohol is not permitted at any of these locations.

A live Webcast of the commencement is available on the University of Virginia's Web site. To see the Webcast, go to http://www.virginia.edu/majorevents/webcastlive.html.

• Weekend Parking: Free parking will be available at the Emmet/Ivy parking garage (near the Cavalier Inn) beginning on Friday morning, May 16, and continuing throughout the weekend. Bus service will not be available.

• Saturday, May 17: To accommodate graduates and guests attending Valedictory Exercises, bus service will run from University Hall and Scott Stadium to Central Grounds from 9 a.m. to 3 p.m.

• Sunday, May 18: Public parking on Central Grounds will be suspended. Graduates and guests attending Sunday's ceremonies are urged to park at the Emmet/Ivy garage and walk to Central Grounds, or to park at Scott Stadium and University Hall and take a free shuttle bus to the Lawn area. Bus service will begin at 7 a.m. and run continuously throughout the day. Prior to the Lawn ceremony, buses will stop on McCormick Road near the University Chapel. After Final Exercises, buses will run from the Chapel to University Hall and Scott Stadium.

The Central Grounds parking garage, on Emmet Street below the U.Va. Bookstore, will offer limited spaces on Sunday for a $5 fee, payable upon entering the garage. No bus service will be available from the Central Grounds garage.

For guests attending diploma ceremonies near the Chemistry Building, Gilmer Hall, Kent House Lawn, Thornton Hall and other buildings in that vicinity, bus service will be available from McCormick Road near the McCormick Road residence area to University Hall and Scott Stadium beginning at noon.

History of commencements
•     2008 marks the 179th year that Final Exercises (U.Va.'s traditional way of describing commencement) have been held at the University of Virginia.

Miscellaneous Finals numbers
•   Chairs: For about 6,000 graduates, their families and guests, approximately 45,000 chairs at 50 sites, including 20,000 on the Lawn, are set up for Finals Weekend. About 21,000 chairs are used for the individual school ceremonies the follow the main ceremony, held on the Lawn.
•  Food: U.Va. Catering operates food stands and caters several events on the Sunday of Finals Weekend; this year, they plan to serve 500 pounds of hot dogs, 17,000 petite gourmet cookies, 4,000 bakeshop cookies, 500 jumbo cookies, 2,500 brownies, 400 gallons of lemonade, 200 gallons of iced tea, 4,000 bottles of water, 400 pounds of golden pineapple, 400 pounds of cantaloupe, 400 pounds of honeydew and 400 pounds of strawberries.
•  Stages: Workers install 12 stages of various sizes around Grounds and furnish them with podiums, tables, stairs, ramps or lifts, skirting, rails and sound systems.
Around 20,500 chairs are set up on the Lawn
• Wire: A quarter-mile of electric wire is used to power monitors and speakers. A half-mile of speaker cable is used to connect speakers.
• Grass: About 2,000 pounds of grass seed are sowed on the Lawn starting in early spring in preparation for the University's Finals Weekend.
• Tents: Around 18 tents are set up for information booths, food tents and other functions.
• Workers: Around 140 Facilities Management employees are deployed on the day of graduation. Around 200 Facilities Management employees are involved in the preparation for Finals Weekend, which includes everything from set-up to tear-down.
• TV screens: Two Jumbotron television monitors are set up on the Lawn.

Media passes are issued from U.Va.'s Office of Public Affairs, 400 Ray C. Hunt Dr. in Fontaine Research Park. Communicate the number of press passes you will need and the names of the reporters to Penney Catlett via e-mail at pdc@virginia.edu or via phone at 434-924-7620.

A video feed of Finals Exercises highlights is available at the following coordinates:

In Memoriam: Life of Drama Professor To Be Honored Sunday END_OF_DOCUMENT_TOKEN_TO_BE_REPLACED