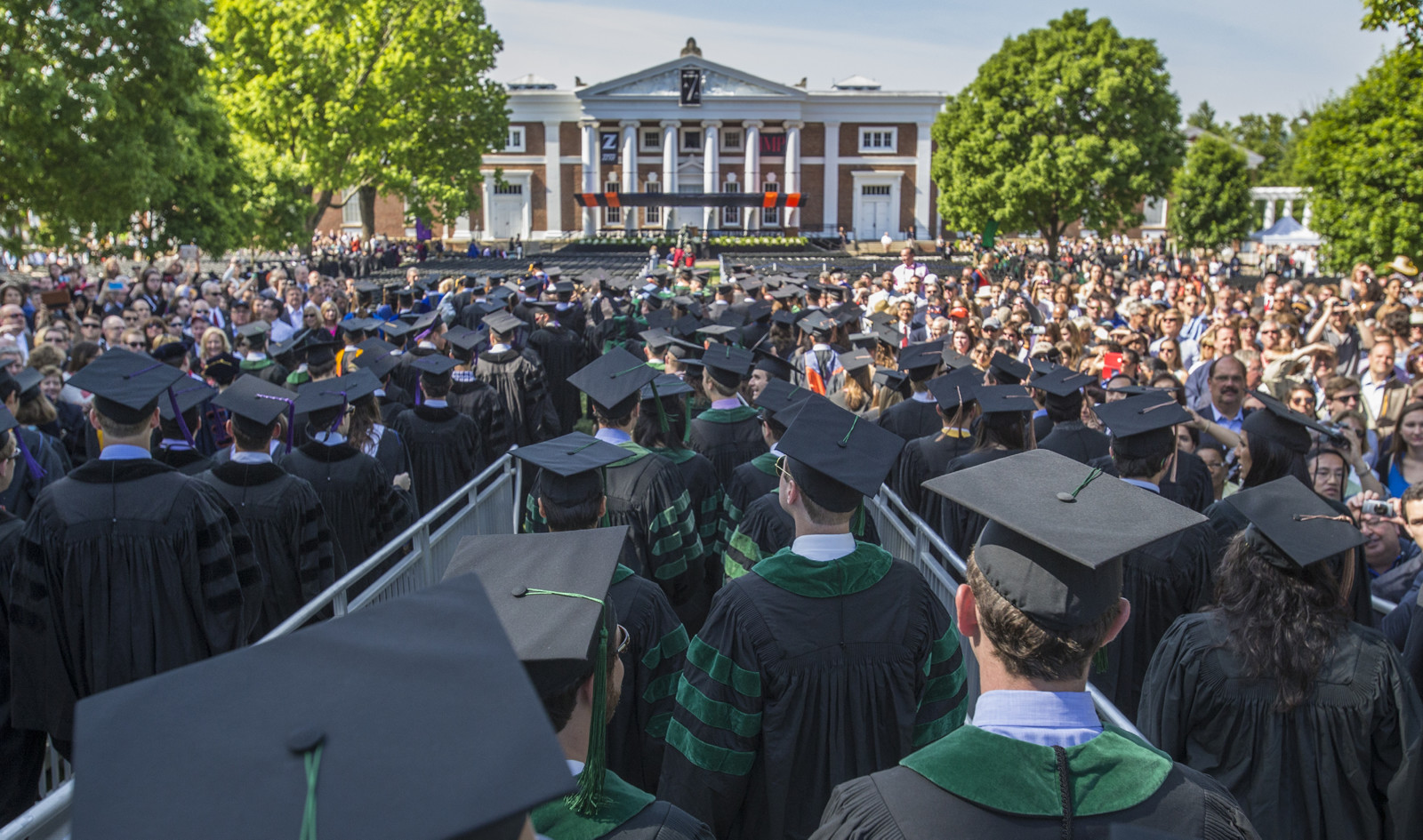 University of Virginia President Teresa A. Sullivan will preside over her sixth Final Exercises on May 20, 21 and 22, with between 30,000 and 35,000 people expected to attend. The three-day commencement celebration will include Valedictory Exercises on Friday, the College and Graduate School of Arts & Sciences graduation on Saturday and graduation ceremonies for the other 10 schools and the Data Science Institute on Sunday.

With the Rotunda’s multi-year renovation nearing completion, each ceremony will once again proceed according to the University’s long-held custom. Faculty and students will process down the south steps of the Rotunda and onto the Lawn in a colorful, joyous parade, cheered by family and friends.

There are 3,869 graduates from Virginia, and 993 graduates are international students.

While the Class of 2016’s degrees will be symbolically conferred during the Lawn ceremonies, students will be recognized individually at their school or departmental graduation ceremonies held across Grounds later that afternoon.

Actress Sarah Drew will be the featured speaker at the May 20 Valedictory Exercises. The 3 p.m. ceremony also will include the presentation of various awards and the bestowing of the class gift, as well as remarks from the Class Trustees and Sullivan.

Drew, who earned a bachelor’s degree in drama from UVA in 2002, plays Dr. April Kepner on ABC’s hospital drama, “Grey’s Anatomy.” A versatile performer, she earned her big break while a fourth-year student and has since appeared on stage, the silver screen and television.

A Long Island native, Drew was participating in a musical theater master class during a summer program in New York City when she was spotted by a casting director who invited her to audition for the title role in a production of “Romeo and Juliet” to be staged at Princeton’s renowned McCarter Theater. She landed the part and earned raves for her performance.

Months after graduation, Drew was onstage in a Broadway production of “Vincent in Brixton,” which soon was followed by her first TV role, a two-year stint on the popular WB series “Everwood.” She had guest-starring roles in several other series, including “Mad Men,” “Glee” and “Medium,” and starred in the Hallmark Hall of Fame movie “Front of the Class” before joining the cast of “Grey’s Anatomy,” now in its 12th season. She also has appeared in feature films, including “Radio,” “American Pastime” and most recently, starred in the TriStar Pictures family comedy, “Moms’ Night Out.”

Drew and her husband, Peter Lanfer were married in 2002 at the UVA Chapel.

On May 21, former U.S. Poet Laureate Rita Dove, Commonwealth Professor of English at UVA, will address the graduates of the College and Graduate School of Arts & Sciences.

Dove, who served as poet laureate from 1993 to 1995, has garnered numerous literary and academic honors, among them the 1987 Pulitzer Prize for Poetry for her book, “Thomas and Beulah”; the 2011 National Medal of Arts, awarded by President Obama; and the 1996 National Humanities Medal, awarded by President Clinton. She is the only poet to have received both presidential medals.

Her publications comprise nine books of poetry, including “On the Bus with Rosa Parks,” “American Smooth” and “Sonata Mulattica”; short story and essay collections; a novel; and a play, “The Darker Face of the Earth.” In 2011, she edited “The Penguin Anthology of Twentieth-Century American Poetry.” A collection of the first three decades of her poetry, “Collected Poems, 1974-2004,” has just been published.

On May 22, School of Law Dean Paul G. Mahoney will speak to the graduates of the University’s other 10 schools and the Data Science Institute.

He has published widely in law reviews and peer-reviewed finance, law and economics journals. His most recent book is “Wasting a Crisis: Why Securities Regulation Fails.”

All ceremonies will be livestreamed at virginia.edu/live.

If inclement or severe weather plans need to be implemented for Final Exercises, the University will make an announcement in local media, on the UVA hotline (434-924-7669) the University’s home page, www.virginia.edu, and the Finals Weekend website, Twitter account, Instagram and Facebook pages. Attendees can also sign up for text message alerts by texting the word “uvagrad” to 79516.

In the case of inclement or severe weather on Friday, Valedictory Exercises will be moved from the Lawn to John Paul Jones Arena, with an announcement made no later than noon. Seating will be on a first-come, first-served basis.

In the case of inclement weather (rain without the presence of lightning or other unsafe conditions) on Saturday or Sunday, the University may elect to hold Final Exercises on the Lawn while moving all school and department graduation ceremonies indoors. If the inclement weather plan is implemented, faculty, students and their guests should go to inclement weather sites designated on the School and Department Ceremony Locations.

If the weather is severe on Saturday or Sunday, Final Exercises will be moved to the John Paul Jones Arena and all school and department graduation ceremonies will be held indoors. Graduating students should arrive at the arena by 9:15 a.m. and proceed directly to the seating area on the main floor of the arena.  Faculty should be assembled in the Courtside Club, which is located on the bottom level of the arena, by no later than 9:45 a.m.  Only ticketed guests will be allowed entry.

Inclement or severe weather plans for Saturday and Sunday will be announced no later than 8 a.m. each day.

Everyone attending Valedictory Exercises and both Final Exercises ceremonies, including graduates, faculty and guests, will be subject to security screening before entering. All bags will be subject to search, which may delay entry into the venue. A “bag check lane” will be available for guests who choose to bring a bag with them.

Everyone wearing an outer garment such as an academic robe or coat will be asked to open it for a visual inspection. To expedite entry into the assembly areas, graduates and faculty are encouraged to don their robes after passing through the security checkpoint.

A list of items prohibited from the ceremonies is available here.

For Friday’s Valedictory Exercises, guests may park free of charge at John Paul Jones Arena and ride a shuttle bus to Central Grounds.

First-come, first-served paid parking will be available at the Emmet/Ivy Parking Garage and the Central Grounds Parking Garage for all three days, with no shuttle service provided. More information about parking, including shuttle bus routes and pick-up and drop-off locations, is available here.

Public parking will not be available on Central Grounds. McCormick Road will be closed from University Avenue to the McCormick Road Bridge from 1 to 6 p.m. on Friday and 7 a.m. to 4 p.m. on Saturday and Sunday.

Allow extra transit time for all events due to increased pedestrian and vehicular traffic.