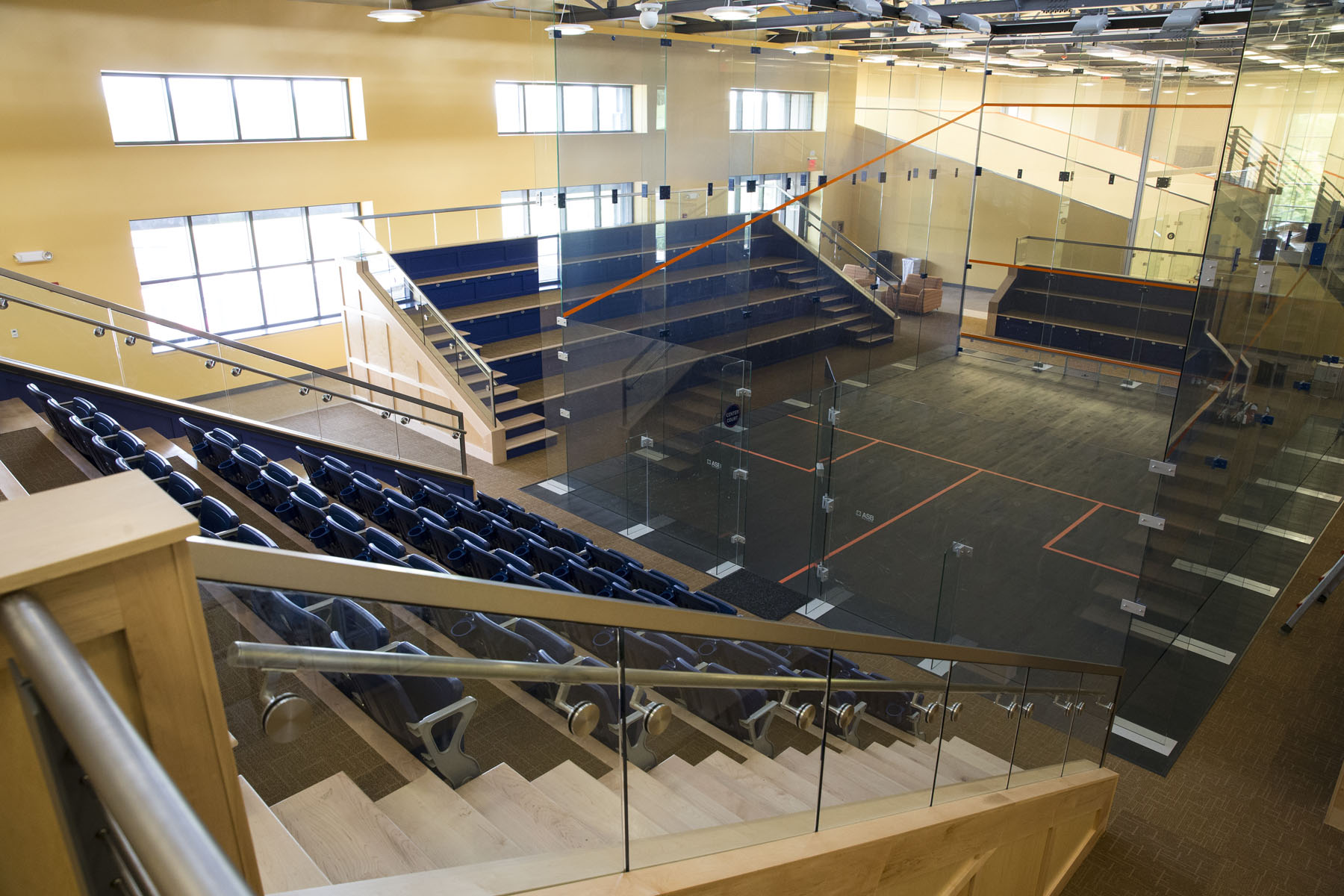 The University of Virginia will unveil its new world-class squash facility on Sept. 19, and the sport’s elite ranks have begun lining up to offer their seals of approval.

The $12.4 million McArthur Squash Center at the Boar’s Head Sports Club opened its doors in April, but the 33,000-square-foot venue will mark its formal debut with a Grand Opening Festival of Squash, to be held Sept. 19 through 22. A ribbon-cutting ceremony and presentations by University officials and the center’s primary donor, Jaffray Woodriff, will launch the festival.

The event will include five simultaneous professional and amateur tournaments, highlighting the state-of-the-art facility’s draw as both a spectator venue for elite-level competition and as a magnet for squash players of all levels.

The squash facility is operated for U.Va. by the Boar’s Head resort, a subsidiary of the University of Virginia Foundation.

“The McArthur Squash Center has clearly exceeded our expectations, in terms of its beauty and its function, its layout and how it’s going to attract people to the game of squash,” said Tim Rose, CEO of the University of Virginia Foundation. “I told my staff when they were working on it, ‘Many people will go through life and never have the opportunity to work on something that’s considered the best in the world. We will be humbled and honored to be able to say, at the end of our careers, ‘We did work on something that was the best in the world.’”

Along with eight other international singles courts and two North American doubles courts, the McArthur Squash Center features at its center a glass-walled international show court with spectator seating and an audio-visual recording system for live web-streaming of tournaments.

U.S. Squash, the sport’s national governing body, offered its endorsement of the new facility’s potential as a host of elite-level tournaments earlier this year, awarding the McArthur Squash Center the 2014 U.S. National Championships and the 2014 Masters Squash Championships.

“It’s a world-class facility,” U.S. Squash director of events Conor O’Malley said. “It’s very unique to have an all-glass court, as well as two doubles courts plus eight international singles courts. You can really cater to the grassroots of the sport as well as the elite level.

“We definitely see it as a gateway to the South. Having a renowned school such as U.Va. and the Boar’s Head Sports Club team up, hopefully other colleges and clubs will see this and embrace it.”

Woodriff, a 1991 graduate of U.Va.’s McIntire School of Commerce and chairman and CEO of Quantitative Investment Management, funded the McArthur Squash Center. The $12.4 million gift for the center and support of U.Va.’s squash teams was donated by Woodriff’s charitable organization, the Quantitative Foundation, and the squash facility is named in honor of his grandfather, Douglas McArthur, a sports enthusiast and active leader in his Bucks County community in Pennsylvania who passed away last year.

“There aren’t many large facilities that have been built in this country solely for squash,” said Woodriff, an enthusiastic player who picked up the sport six years ago. “The potential player pool with this facility, given that it’s part of U.Va., is huge, and we’re seeing new people literally every day come in here.”

In addition to hosting top-level professional events, the center is open to University faculty, staff and students, as well as members of the Boar’s Head Sports Club and guests of the Boar’s Head resort. It also will serve as home to U.Va.’s men’s and women’s squash teams, which compete against other club and varsity squash programs within the College Squash Association, the governing body for intercollegiate squash.

Former professional player and internationally respected coach Mark Allen, hired earlier this year to guide U.Va’s club teams and serve as the Boar’s Head Sports Club’s director of squash, said that the McArthur Squash Center has already accomplished its mission, both in attracting new players to the sport and in drawing the interest of top-level collegiate recruits now considering U.Va.

“I’ve been to bigger facilities, but I don’t think I’ve been to a facility as beautiful as this,” said Allen, who has played professionally in close to 40 countries and coached on four continents. “The McArthur Squash Center, the way it’s built and this center court, are as good as anything in the world out there right now. As a spectator venue, it’s up there with the very best. And the prospective students who have been to the facility, they just walk around this corner and they see this show court, and their jaws drop. It really does sell itself.”

A summer program of camps and clinics drew players as young as 5 years old to the center, Allen said, and the fall schedule of clinics and lessons is anticipated to be popular with newcomers to the sport as well.

“We’re not in the squash hub yet like Philadelphia, New York and Baltimore,” Neiderer said, “but the McArthur Squash Center provides an opportunity to develop the sport further south. Even folks who had little interest in squash, when they enter the building, they’re amazed and impressed.”

What Is the ‘4th Side’? END_OF_DOCUMENT_TOKEN_TO_BE_REPLACED