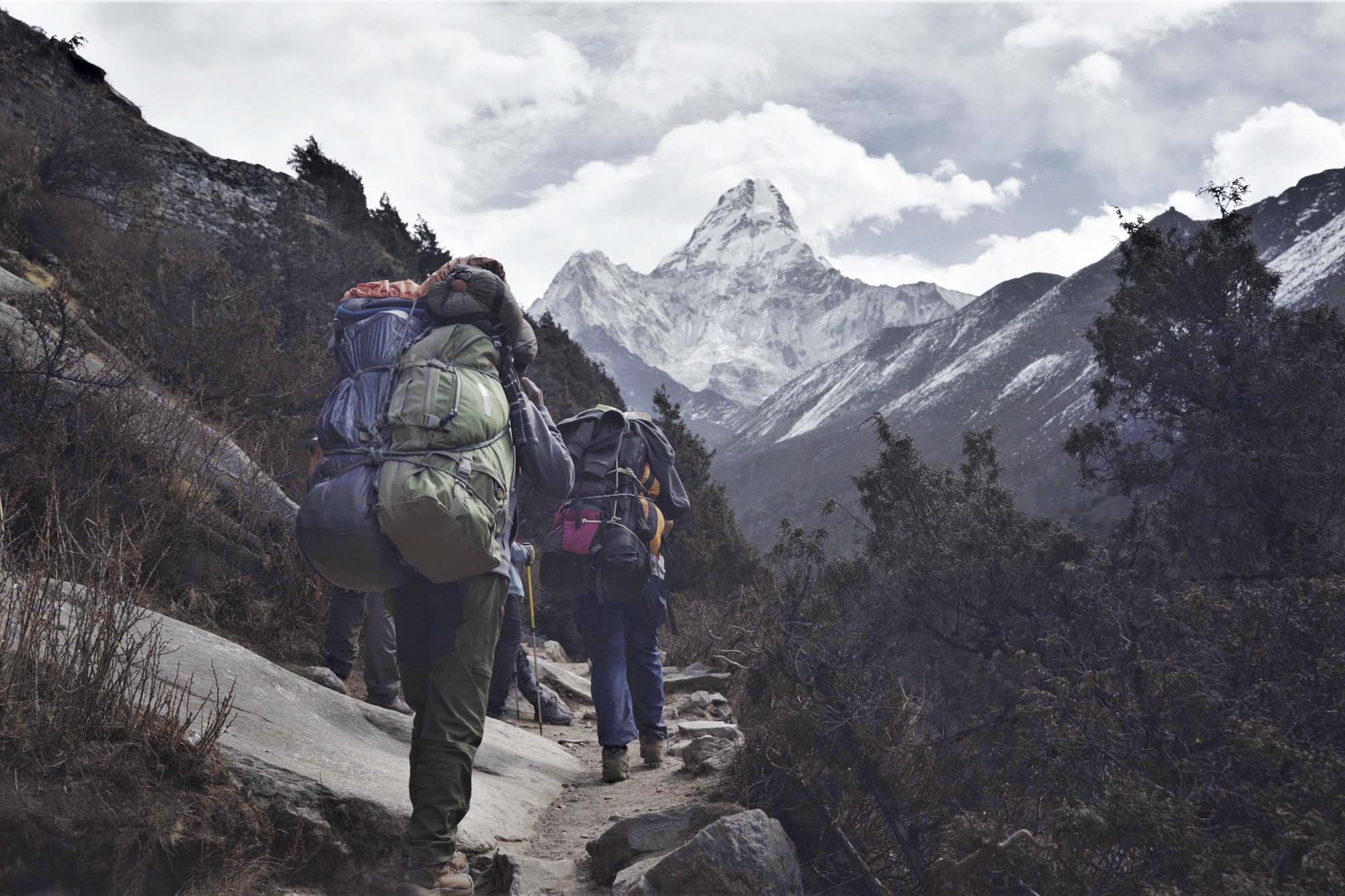 In March 2019, a search for Nate Menninger would have found him in Nepal, working as a porter for a Himalayan trekking company. Such adventures are nothing new for this University of Virginia graduate.

He had an unmemorable lacrosse career at UVA, where a series of injuries stymied him, but Menninger made an indelible impression on then-head coach Dom Starsia.

“He was somebody that always had an adventurous spirit about him,” Starsia recalled of Menninger, a defenseman who joined the program as a walk-on in 2013 after transferring to UVA from Division III Hamilton College in New York.

“He was one of those creative guys that was always interesting to talk to, almost about anything other than lacrosse. He was bright and inquisitive, and he had a lot of other interests, and I always enjoyed catching up with him.”

On the field, the 6-foot-1, 220-pound Menninger “was a really powerful athlete, but he just never was healthy long enough to be able to sustain any development overall,” Starsia said. “There was a game or two where he made a big difference for us playing-wise, but he was just hurt so much of his career that he never really held up.”

In the summer of 2014, Menninger flew to Spain, where he ran with the bulls in Pamplona. Later, in Central America, he went scuba-diving in the shark-infested waters of Belize, and after graduating in 2016 from UVA, where he majored in Spanish and minored in philosophy, he headed to Argentina with a snowboard and a saxophone, intending to become a “ski bum,” he said.

“I started to fall in love with the idea of extreme things in college,” said Menninger, 26, who grew up in Newton, Massachusetts, near Boston, and is now based in Atlanta.

He had little interest in a conventional career path. An avid writer, he developed a passion for the kind of participatory journalism practiced by George Plimpton and Nellie Bly, among others. Menninger lived in England for several months, serving as an apprentice to the painter Sax Berlin and working on his writing. 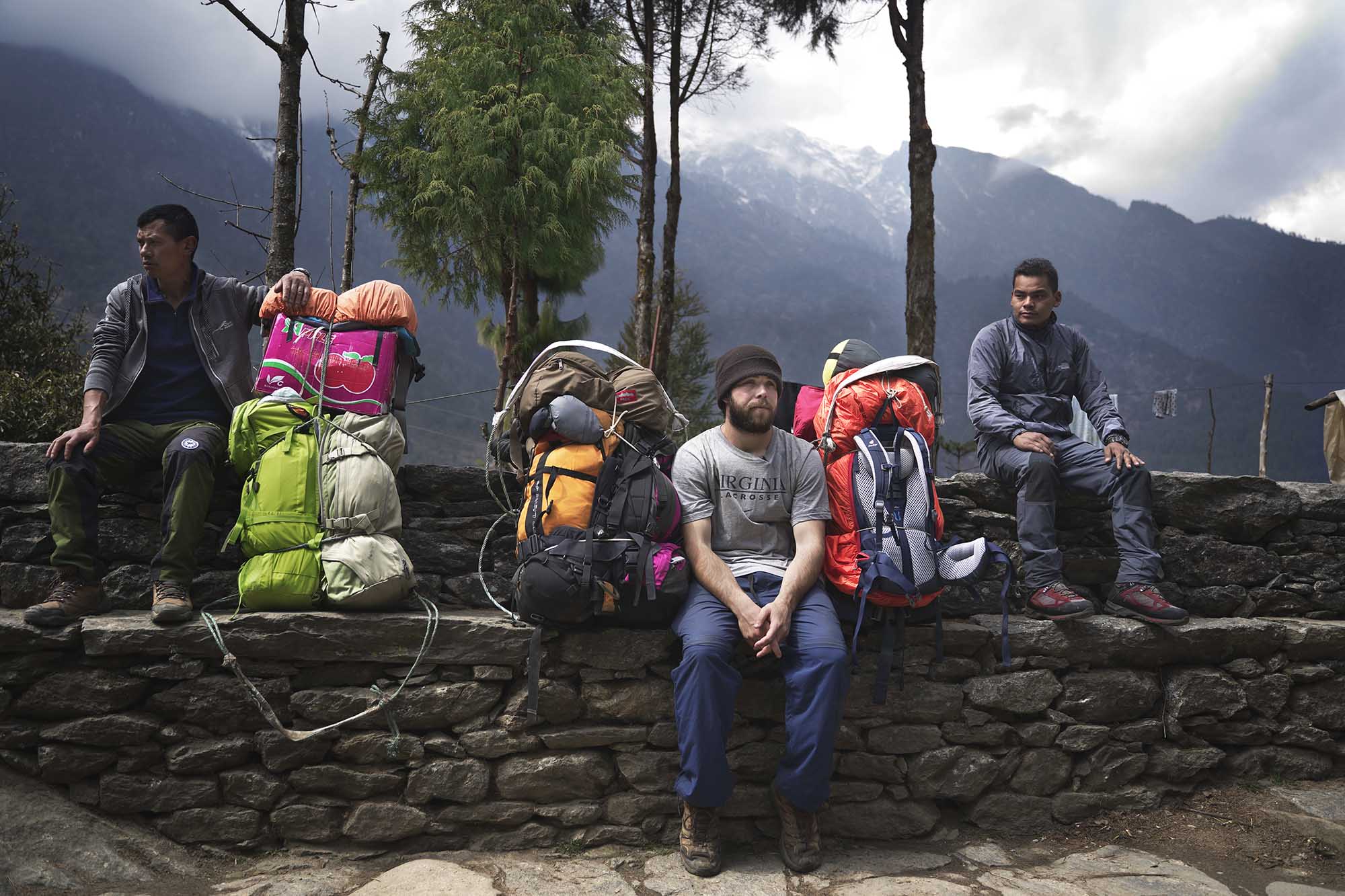 Eventually he returned to Nepal, where he’d been twice previously. This time Menninger wanted to become one of the first non-native porters, often called Sherpas, to aid an expedition. He also hoped to raise awareness of the plight of porters, who receive little pay for their backbreaking work carrying bags and equipment.

He originally hoped to raise $65,000 and climb Mount Everest as a porter, with the expedition to be captured in a documentary. But Menninger wasn’t able to raise that much money, and so he settled on a more modest project: a film about his experience as a porter on an 11-day trek from Lukla, about 9,400 feet above sea level, to Everest Base Camp (altitude 17,600 feet) and back.

Among those who helped with financing was Zachary Wood, one of Menninger’s former teammates at UVA.

Back home, Menninger took dozens of hours of footage captured by cinematographer Babin Dulal and went to work, learning the various aspects of film production as he went.

“I had to do it all alone,” Menninger said. “I had to color it all alone, I did the audio alone, and I did the editing alone. My dad had been an editor a long time ago in Hollywood, and he had the system and taught me some technical things. He was always there as a soundboard as well, which really helped.”

Eight months later, the result was a 55-minute documentary, titled “The Porter.”

Most of the porters with whom Menninger worked in Nepal are members of the Tamang ethnic group. Menninger taught himself their language, Nepali, and asked them to treat him as they would one of their own. They often tried to lighten his workload, Menninger said, but he’d push back.

“Every time I’d be like, ‘I want the exact same thing as what you’re eating. I want the same thing you’re drinking. If somebody is going to sleep on the bed, I want to sleep on the bed. What do you have in season? One blanket. OK, I’m only going to sleep with one blanket tonight.’ The whole time, they wanted me to not do as much, and I was almost comically adamant to do the opposite.”

When the documentary was done, Menninger sent it to one of the porters with whom he’d worked in Nepal and asked for feedback.

“I was really, really, really, really worried about that,” Menninger said. “It was just a big moment. He got back to me and he was like, ‘[The depiction is] almost not bad enough. What about this part? You didn’t capture this part. This was so hard.’ And I said, ‘I know. We couldn’t get it all.’” 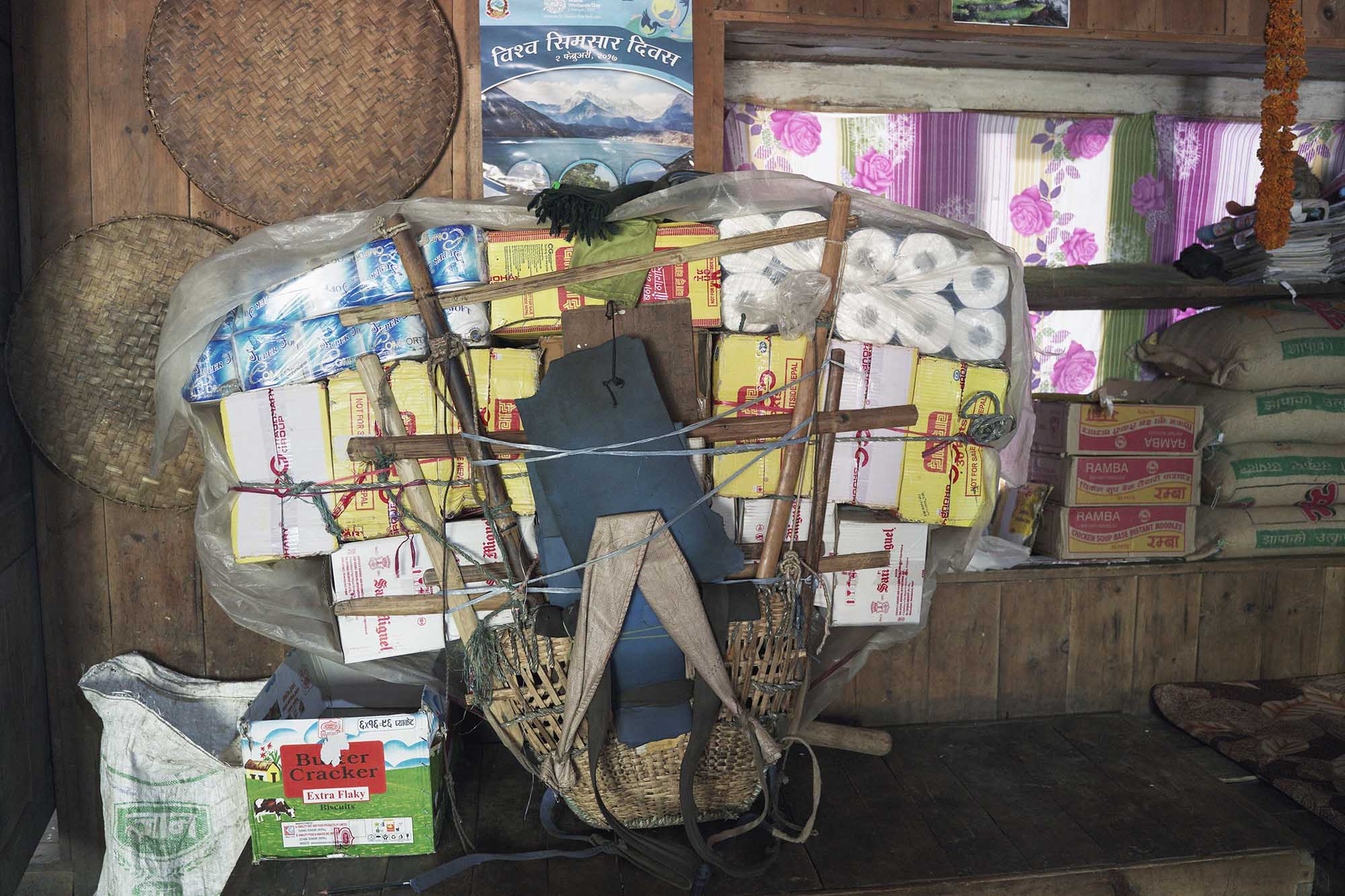 Menninger lost 20 pounds during his trek. Even so, he still dwarfed the Nepalese porters, whose work capacity and strength amazed him.

Before he went to Nepal, Menninger went on training runs with a weighted vest, and he did some climbing once he arrived there. Overall, though, he trained little for the trek, which started in late February 2019.

“It was mainly just those six days or so of walking in [from the city of Jiri] before I got to Lukla and carrying my videographer’s gear,” Menninger said.

That gear weighed about 40 pounds, he said. Using a head strap called a namlo, Menninger began the trek carrying about 25 kilograms (55 pounds) and added more weight every day or two. The combination of his load and the altitude took a toll on him.

“I’m not going to lie,” Menninger says in the film, near the midpoint of the trek. “I feel terrible. My head’s already pounding, and I don’t know why.”

Around the sixth day, Menninger recalled, “I bumped up to 40 [kilos], and that was pretty tough for me. But I kept trying to build, because I kept bragging that I could do 100 [kilos].”

On the 11th and final day of the trek, Menninger carried 100 kilos for one section of the route. As the film makes clear, it was a struggle.

“I just got rocked,” Menninger said.

The surroundings in the Himalayas often were spectacular, but Menninger rarely was able to appreciate their grandeur.

“You find you move faster and more easily when you’re just looking down, so some days I wouldn’t look up,” he said. “But I’d been there before, which actually probably gives me a closer experience to [that of the other porters], because they’ve been there so many times. There’s still some beauty, but I think you just get kind of numb to the scenery.”

Back in Lukla, at trek’s end each of the porters in his expedition received a $100 tip from the clients, Menninger said. In addition, each received $15 per day from the trekking company. The porters must pay for their food and lodging during the trek.

“There are hard jobs all around the world,” Menninger said. “This is just one. It’s a job that’s very necessary for the environment. It’s just [unfortunate about] the way that they’re paid.

“I’m not trying to say their work is bad. In fact, a lot of the people are proud of it. They’ll say, ‘How much do you carry?’ That’s a huge thing. Just like on an athletic field: ‘How much are you lifting? How fast are you running?’ You can be very proud of that, but you should just get compensated fairly, I believe. And this isn’t fair.”

When the trek finally ended, Menninger said, he “went and collapsed in the countryside of Nepal for like two weeks. Then ate a bunch of food.” 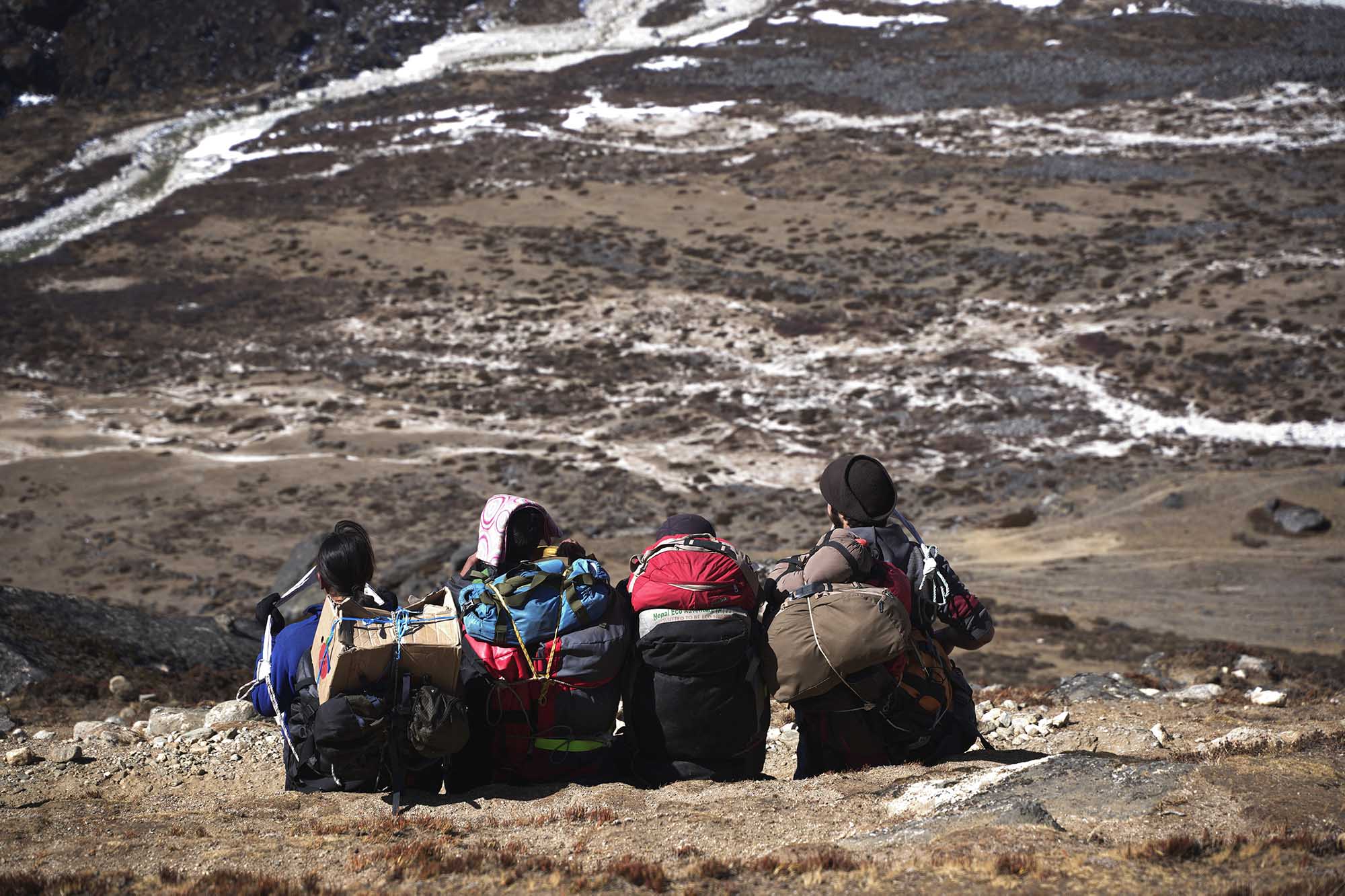 Back in the United States, he’s trying to make his film available on as many platforms as possible. His experience in South Asia, where at one point he went 23 days without a shower, made him realize “I am one lucky dude,” Menninger said.

“I don’t want to throw the word privilege around, but I made this film living at my parents’ house, eating their food, and using their bathrooms. I think I learned about perspective and about what privilege really is.”

In much of the documentary, Menninger can be seen wearing a Virginia Lacrosse T-shirt, but his college career didn’t end in Charlottesville. He had eligibility remaining after graduating from the University, so he enrolled at Florida Tech, a Division II school where he planned to play both football and lacrosse.

“I wanted to give it one last go,” Menninger said. “When you’re an athlete, you’re really obsessed with it.”

He never got healthy enough to play football at Florida Tech, but he scored five goals in 2017 for the school’s lacrosse team. He’d recorded five goals at Hamilton and one at UVA, which gives Menninger the distinction of having scored at every level of college lacrosse.

“He might be the only member of that club,” Starsia said, laughing.

“I don’t know if it’s a good thing,” Menninger said, “but it happened.”