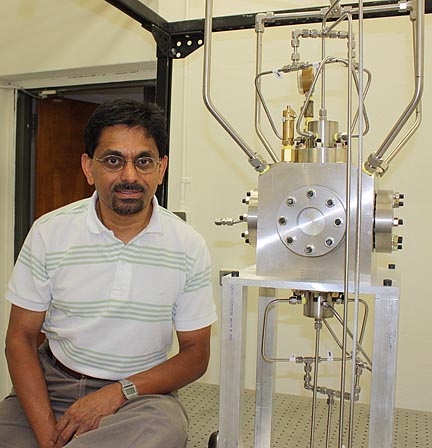 July 9, 2010 — Harsha Chelliah, a University of Virginia professor of mechanical and aerospace engineering, recently secured a four-year research grant to better understand and, it is hoped, eliminate soot particle formation produced by gas turbine engines. The grant, seeded by Rolls-Royce, the Commonwealth of Virginia and other partners, totals roughly $1.5 million.

Working from a lab in U.Va.'s decommissioned nuclear reactor facility, Chelliah and his graduate and undergraduate student research team have built two model reactors to study how to reduce the production of soot particles. The first experimental reactor operates at normal atmospheric pressure and has allowed the team to fine-tune experimental tools and methods.

Testing will soon begin on a second reactor that can burn jet fuel at 40 to 50 atmospheric pressures, which is equivalent to real jet-engine flight conditions. This undertaking fills a void in research at such high-pressure conditions and will help aerospace engine manufacturers meet anticipated U.S. Federal Aviation Administration regulations on soot particle emissions.

"While the aerospace industry has taken significant steps to reduce soot particles, there is still work to be done," Chelliah said. "A major reduction or complete elimination of particulate matter formation by gas turbine engines is possible, with advanced diagnostic techniques being developed around the world.

"This research is expected to improve air quality near major airports and also reduce contrail formation in the upper atmosphere," he added.

Both laboratory reactors are outfitted with advanced diagnostic equipment to capture soot particles illuminated by lasers. The process allows the research team to quantify the presence of particles at different burn conditions. Data produced will be used to create more reliable computational models for development of next-generation jet engines.

The project is one in an array of research activities born of a partnership among Rolls-Royce, the commonwealth, the U.Va. Engineering School and the Virginia Tech College of Engineering, formed in 2007 when Rolls-Royce announced it would build a new aerospace facility in Prince George County. Construction is now under way.

Jet-fueled, gas turbine engines produce vapor trails, or contrails – short for condensation trails – made up of droplets that form around nanoscale soot particles. From the naked eye, these are observed as jet trails often crisscrossing the sky, appearing as merely white lines in the atmosphere. According to some studies, contrails formed in the upper atmosphere may cause shifts in the global energy balance by trapping heat that radiates from the Earth, while soot particles emitted near airports during landing and take-off may have implications for human health.

The project funding supports several graduate and undergraduate students and research staff. The U.Va research team is working in collaboration with the Chemical Kinetics and Modeling Group at the National Institute of Standards and Technology, where Chelliah spent a year of sabbatical leave in 2008.

How a Single Email Changed a Life END_OF_DOCUMENT_TOKEN_TO_BE_REPLACED

Fall Is in the Air on Grounds END_OF_DOCUMENT_TOKEN_TO_BE_REPLACED

At UVA, There Is a Club for Everyone END_OF_DOCUMENT_TOKEN_TO_BE_REPLACED