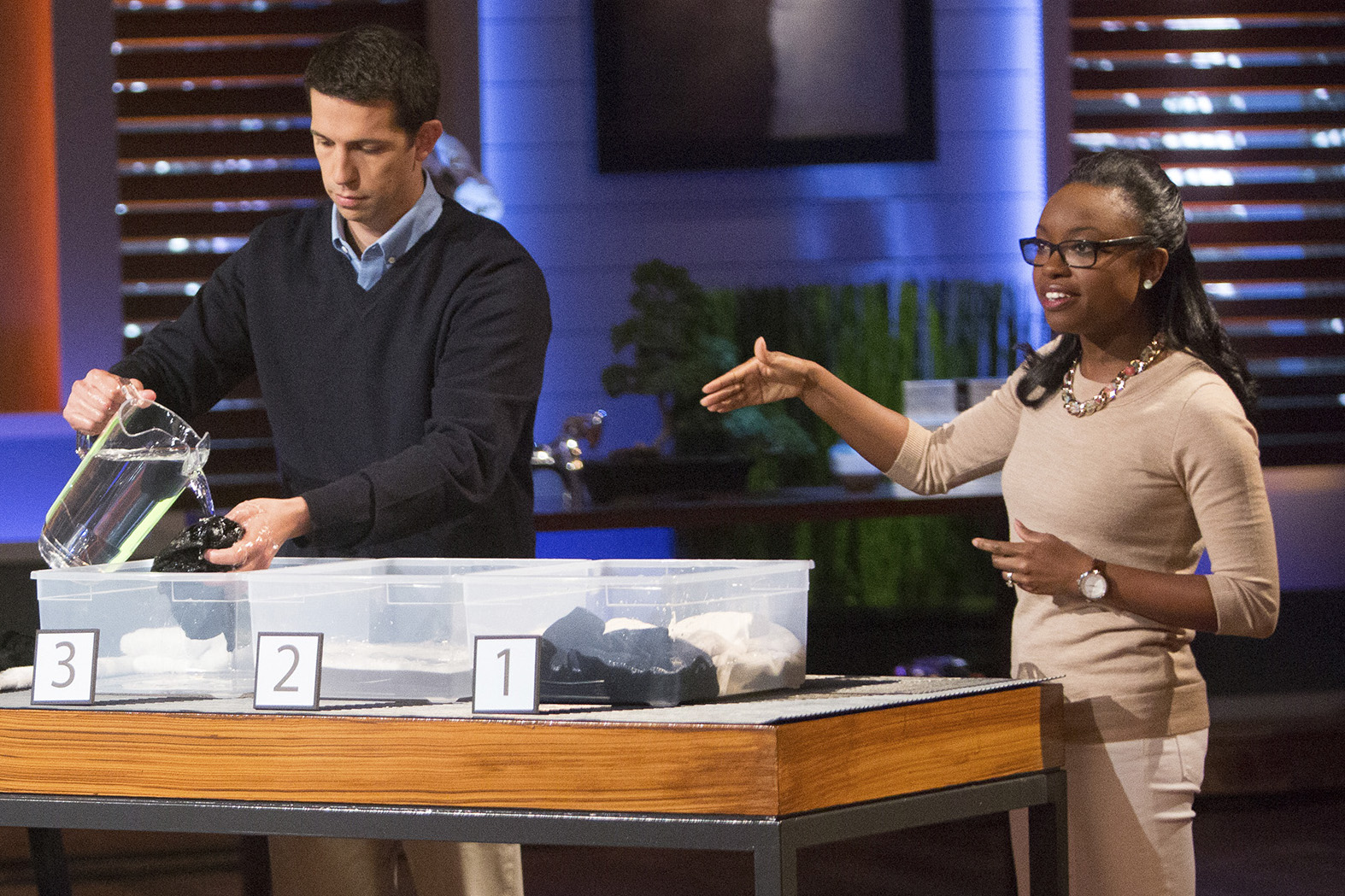 Update: On the Nov. 13 episode of “Shark Tank,” Stolar and Barbera struck a deal with billionaire investor Mark Cuban. Cuban agreed to pay them $150,000 for a 15 percent stake in Unshrinkit.

This Friday, University of Virginia alumna Desirée Davis Stolar is feeding herself to the sharks – the kind with investment dollars, not multiple rows of teeth.

The 2007 graduate of the College of Arts & Sciences is pitching her successful new clothing care start-up, Unshrinkit, to the wealthy and cunning investors of ABC’s “Shark Tank.”

Stolar’s journey to entrepreneurship and reality television all started with an embarrassing wardrobe malfunction while she was attending Harvard Business School.

“When you move to Boston, you are woefully unprepared for their winters,” Stolar said. “My family gave me lots of wool sweaters to help me stay warm, but I didn’t pay close enough attention to the washing instructions.”

She accidentally shrunk an expensive cashmere sweater that was a gift from her sister. Determined to fix it, she turned to the Internet. After following a YouTube tutorial that suggested soaking the sweater in hair conditioner and water, Stolar was delighted when she was able to stretch it back to its original size. Unfortunately, it didn’t last.

“I proceeded to go to Harvard Business School class with a sweater that shrunk three inches and turned into a crop top over the course of the day. I had to borrow someone else’s jacket to hide it!” she said.

Faced with the prospect of many more cold winters in Boston and the likelihood that more sweaters would make it into the dryer by accident, Stolar decided it was time to find a fix for this common problem.

“[Harvard Business School] splits each class into groups of six and gives them $5,000 to start a microbusiness,” she said. “A lot of people work on new apps or services, but I convinced my teammates we should make a consumer good.”

When she pulled up YouTube and Google and showed them how many millions of views there were for supposed do-it-yourself fixes to sweater shrinking, they couldn’t argue that there was a demand for a new product. Unshrinkit was born.

Stolar’s co-founder, Nate Barbera, reached out to Cornell University’s Department of Fiber Science and Apparel Design for every textbook they had on wool and the reactions of wool fibers to different treatments.

When wool fibers are subjected to the heat and agitation of the washer and dryer, the fibers curl up into a ball, effectively shrinking the piece of clothing they make up. Barbera, with his product development background, led the team in creating a patent-pending solution that interacts with the proteins in wool, relaxing their bonds and allowing the fibers to be straightened out again. Most importantly, the solution is gentle on hands, the garment colors and the wool fabric itself.

All Unshrinkit users have to do is mix a bottle of the solution with a gallon of water and allow their clothes to soak in it for 30 minutes. Then the wool can easily be stretched back to the desired size and set out to dry. 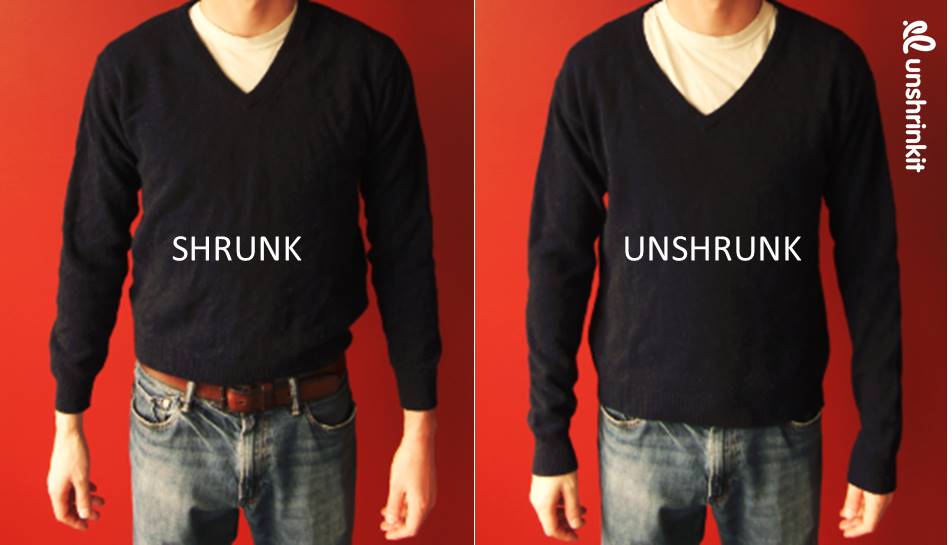 After months of testing, they began selling the first bottles of Unshrinkit in September 2014. On Sept. 17, they were featured on The Grommet, a Massachusetts-based e-commerce site that specializes in unique products with a purpose.

“The Grommet warned us that Unshrinkit would sell quickly, but we were shocked when they called to say they’d sold out of all 200 bottles we had in stock within the first hour,” Stolar said. “We ran back to our dorms and started bottling more.”

Following that initial spike, Stolar realized she would need a steady means of generating interest in the product. She fell back on one of the key lessons she’d learned as a media studies major at UVA: always stay contextually relevant to your core customer.

“Instead of using a large advertising budget, I blocked off a big chunk of time to monitor Twitter,” she said. 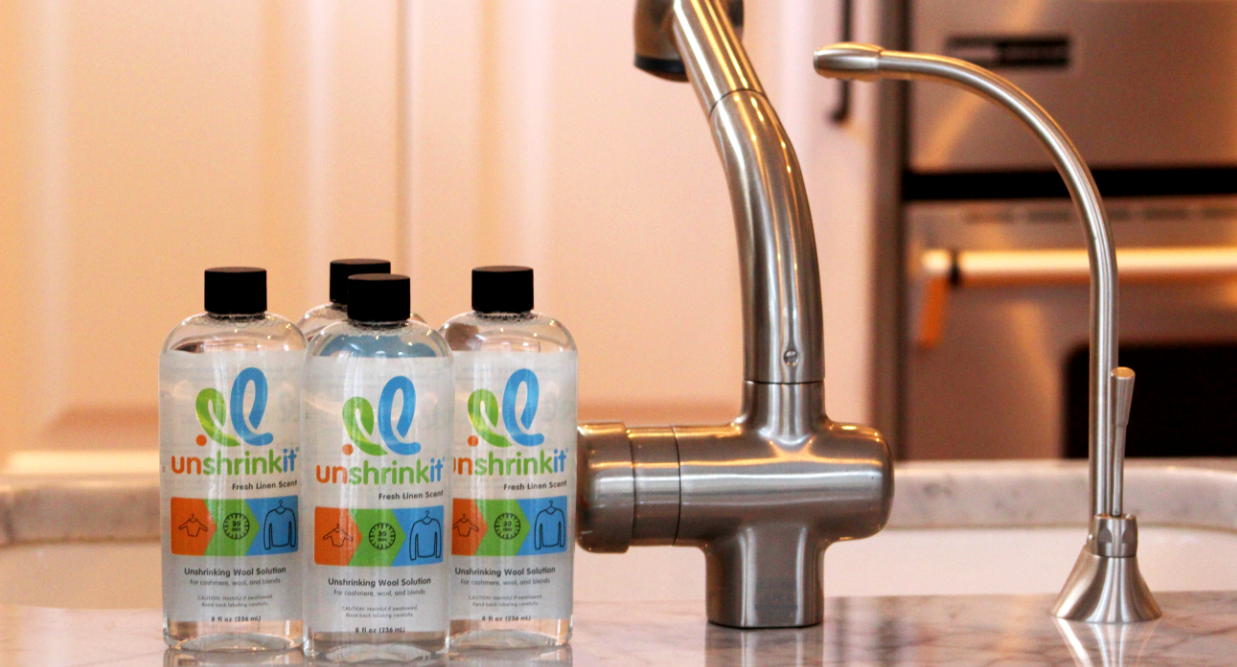 Whenever she saw someone tweet about a beloved sweater they had shrunk, she would tweet back directly and recommend Unshrinkit. One day she tweeted to someone who happened to be a relative of a producer at NBC’s “Today” show. Soon, Unshrinkit had its first spot on national television.

After their feature on “Today,”, Unshrinkit continued to do so well that Stolar and Barbera decided to continue the venture after their graduation this spring. To date, they’ve sold more than 8,000 bottles of their quick-fix product and they have big plans for the future. Stolar will aim to convince the “Shark Tank” investors to back the business.

“When we were still in the research-and-design phase, we made a point of retaining the intellectual property on a number of new clothing care materials that are safe on fabrics as well as hands, so other products are definitely in our pipeline,” Stolar said.

In November 2014, Stolar and Barbera transferred Unshrinkit’s bottling and labeling operation from their dorms to contract manufacturers to keep up with demand, but they’re proud to say it’s still made in Massachusetts.

“We’re all from relatively small towns and we’ve seen how critical it is to keep thriving industry in this country,” Stolar said. “At no point was it ever discussed that we set up manufacturing anywhere except the United States.”

Readers can see Stolar and Unshrinkit in action Friday at 9 p.m. EST on “Shark Tank” on ABC.

Class of 2020: Memories and Moments From a Long-Anticipated Celebration END_OF_DOCUMENT_TOKEN_TO_BE_REPLACED