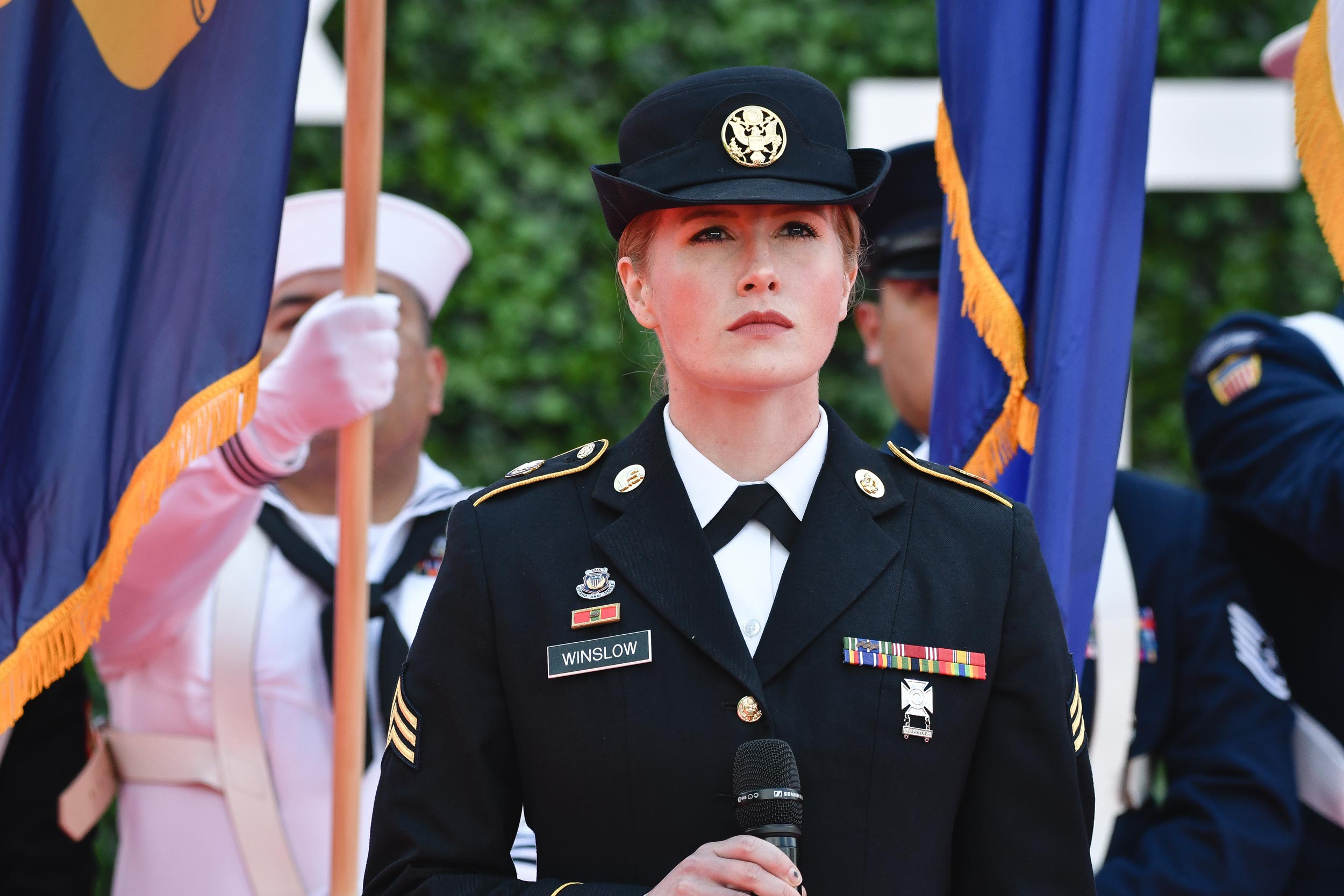 For a moment this morning, Sgt. Kayla Winslow’s voice was the only sound on Normandy’s beaches – and it was a powerful sound indeed.

Winslow, a University of Virginia alumna, is a soloist with the U.S. Army Europe Band & Chorus, which was chosen to perform “The Star-Spangled Banner” as world leaders, including U.S. President Donald Trump and French President Emmanuel Macron, gathered to mark the 75th anniversary of the D-Day battle – which also happened to fall on Winslow’s 29th birthday.

Her voice rang out over a crowd of thousands gathered near a cemetery in Colleville-Sur-Mer, France, the final resting place of more than 9,380 American service members who were killed in World War II. Veterans who survived the landings that day were in attendance, sharing the stage with Trump, Macron and other world leaders.

Back in Chesapeake, Winslow’s parents woke up at 4 a.m., eager to watch livestreamed video of the ceremony and hear their daughter.

They only learned she would participate a few days ago. Winslow, a 2012 graduate and a member of University Singers at UVA, just moved to her new station in Sembach, Germany in April. Previously, she served with the 4th Infantry Division Band in Fort Carson, Colorado, where she regularly performed at official ceremonies, parades and other events, including two Colorado Rockies games.

The D-Day program had been planned for months, and because she was new to the unit, Winslow had to scramble to get the appropriate permissions and work out the logistics to join the band in Normandy. She made it happen and arrived in Normandy on Monday.

It was, her mother Anneke said, a perfect birthday present for the soldier and her proud parents.

“I was so nervous,” she said. “But I just keep thinking what a blessing she is, and remembering when she was born 29 years ago. It was just a blessing.”

"I kept thinking about how the phrase 'O, say can you see, by the dawn's early light' seemed to resonate in a totally different way standing by the beaches of Normandy with the morning of D-Day in mind," she said. "I know the lyrics and melody are exceptionally meaningful to the veterans we celebrated this morning, so it was absolutely a privilege to be able to share that picture with them."

A Year We Will Never Forget: 2019-20 in Review END_OF_DOCUMENT_TOKEN_TO_BE_REPLACED

‘What Will You Carry With You?’ Remarks From UVA President Jim Ryan END_OF_DOCUMENT_TOKEN_TO_BE_REPLACED