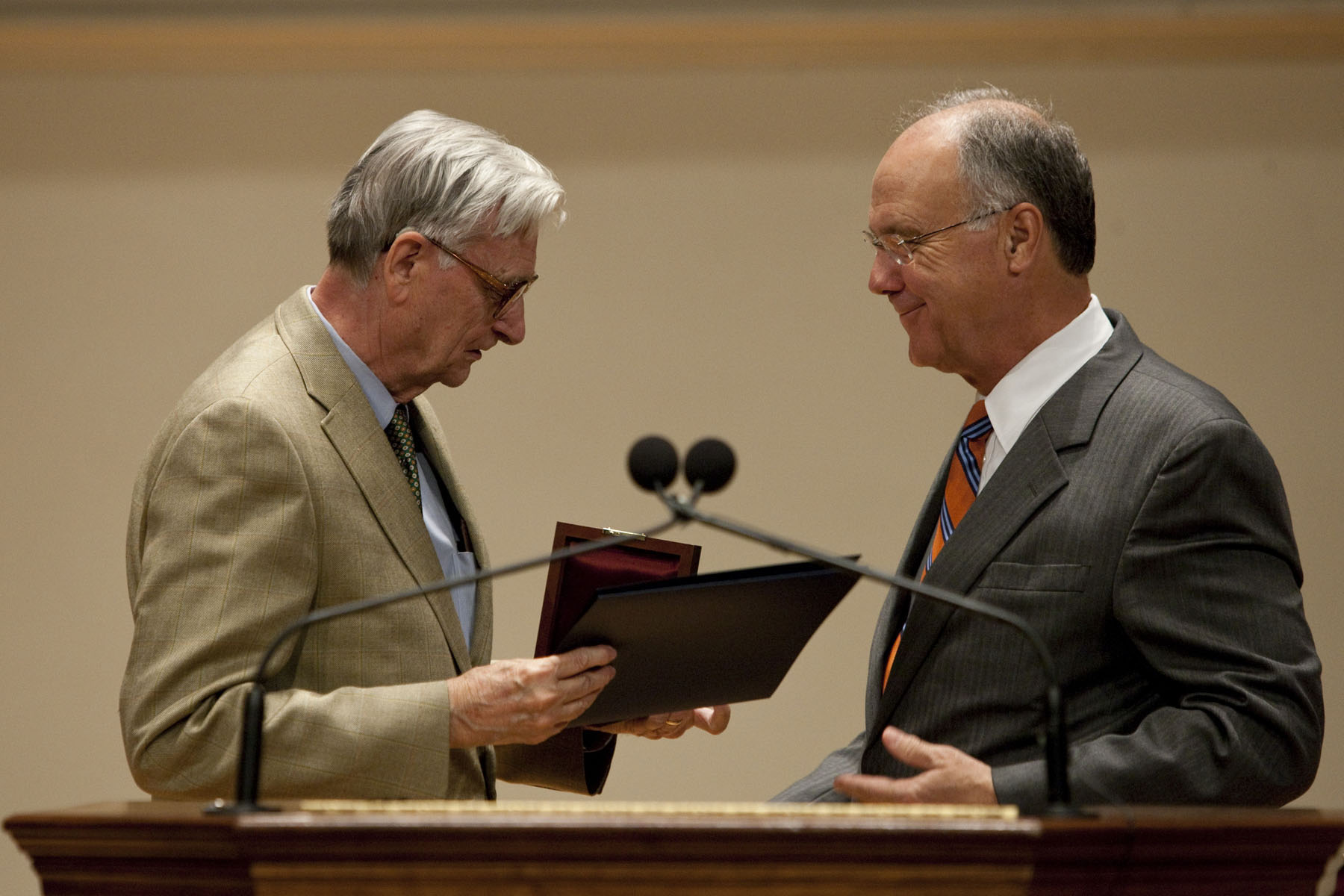 April 14, 2010 — The audience was small, but the applause was warm at Tuesday's public presentation of the 2010 Thomas Jefferson Foundation Medals in law, architecture and citizen leadership in Old Cabell Hall Auditorium at the University of Virginia.

The medals are usually presented at a private luncheon as part of Founder's Day, which is observed on Jefferson's birthday.

U.Va. President John T. Casteen III said the change in venue is significant. "I don't think any University has a closer relationship to its founder than has this one," he said. "We simply realized that this day belongs to the republic."

He said he hopes that attendance will grow as a new U.Va. tradition takes hold.

The Thomas Jefferson Foundation Medals are the highest external honors bestowed by the University, which grants no honorary degrees. They recognize achievements of those who embrace endeavors that Jefferson, author of the Declaration of Independence, third U.S. president and U.Va. founder, excelled in and held in high regard.

Each of the honorees delivered public talks on Tuesday.

Edward O. Wilson, the 2010 Thomas Jefferson Foundation Medalist in Architecture, on Tuesday commended U.Va.'s School of Architecture for building a curriculum "solidly based on the Jefferson tradition of knowledge" and on interdisciplinary exploration.

He discussed the interconnectedness of science, social science and humanities in helping understand and navigate the world. His theory of "consilience" is the "cause and effect explanation across disciplines."

"Why is this conjunction among the branches of learning important? Because it offers the prospect of characterizing human nature with greater objectivity and precision, an exactitude, that is key to human self-understanding. The intuitive grasp of human nature has been the substance of the creative arts," he said.

Wilson also discussed his theory of biophilia – the innate affiliation people seek with other organisms and especially the natural world. He cited studies that show that people gravitate toward an environment that combines three features: a heightened location where they can look down, a savanna-like terrain scattered with trees or thickets of small bushes, and proximity to a body of water. "Even if all these elements are purely aesthetic and not functional, they will pay enormous prices to have this view," he said.

"In short, people want to be in environments in which our species evolved over millions of years. ... Is that such a strange idea?"

His theory of sociobiology proposes a biological basis for social behavior of all organisms, including man, which combines ethnology, ecology and genetics to explain biological properties of societies.

"I am in the birthplace of American Enlightenment," Wilson said. No one did more than Thomas Jefferson to champion education, he added.

"The value of the consilience program – or renewal of the Enlightenment agenda – is that at long last we appear to have acquired the means either to establish the truth of the fundamental unity of knowledge, or to discard the idea. I think we're going to establish it. The great branches of learning seem destined to join in this way," Wilson said.

He concluded, "Thank you, Thomas Jefferson. Thank you, the University of Virginia. Thank you, colleagues in the search for 'consilience.'"

Spending time in private law practice before turning to public service is a legal tradition that goes back to the University's founder, Department of Homeland Security Secretary Janet Napolitano told students Tuesday.

Prior to his political career, Thomas Jefferson read the law under George Wythe and spent seven years as a working lawyer, said Napolitano, a 1983 Law School alumna who spoke at the school after receiving the Thomas Jefferson Foundation Medal in Law.

"Not only are we at the seat of his home and his traditions, but the notion that he went from reading the law to practicing the law as a commercial lawyer to public service is very much a tradition that has continued through United States history, and that I hope some of you are considering," she said to students assembled in Caplin Auditorium.

Napolitano traced her own career path from law school to her current position as the head of the third-largest department in the federal government, and described current efforts in areas such as immigration enforcement. The department has 230,000 employees and a $55 billion budget.

She left Charlottesville in 1983 to clerk for a judge in Phoenix, where she later worked at a law firm, first as an associate and then as a partner.

"While I always had a notion that I wanted to do something in the public service realm, I also needed to pay off some loans and get settled financially, like many students do," she said.

Napolitano later left private practice and got involved with the Arizona Democratic Party. She was appointed the state's U.S. Attorney by President Clinton, a move she characterized as her first step into her career in public service.

Afterward, Napolitano successfully ran for both attorney general and governor in Arizona before joining the Obama administration.

Neubauer Extols the Privilege of American Freedom and American Education

Joseph Neubauer, chairman and chief executive officer of ARAMARK for more than 25 years, spoke Tuesday morning at Monticello about the importance of American higher education, "the second-most important American achievement after the shining example of democracy precipitated by Declaration of Independence."

American higher education was key to his own improbable Horatio Alger rise from a humble start after immigrating from Israel at age 14, explained Neubauer, who now serves as chairman of the Horatio Alger Association of Distinguished Americans.

With help along the way from total strangers like a high school English teacher who stayed after hours to tutor him, Neubauer put himself through Tufts University. He then received a scholarship for graduate studies in business at the University of Chicago, even though he was not yet a U.S. citizen.

"That particular fact, that I got the scholarship before I was an American citizen, is a mystery to me to this day," he said. "I will never forget my start in this country and the people who believed in me.

"For me the privilege of American freedom and American education and the opportunities they offer are inexorably intertwined."

But the growing restrictiveness of U.S. immigration policy threatens this "fundamental pillar of American strength," he said, suggesting the U.S. should change its laws to be more welcoming to immigrant entrepreneurs. One proposed law would provide a two-year visa to anyone who can raise $250,000 from American investors, and would offer permanent residency to anyone who raises $1 million in investment or sales and hires five Americans.

Tackling today's complex and global challenges requires leaders with broad-based education and competence in more than one realm, he said. As an example, he said solving today's health problems requires expertise in economics and nanotechnology as well as medicine.

Jefferson's life was a testament to the value of broad education, Neubauer said. "I believe that Jefferson's lifelong addiction to reading and learning enabled him to synthesize so many complex ideas into such coherent vision with such momentous and practical consequences. I believe that his years of public service forced him to test those ideas against the best minds of the day. I believe that both he and the U.S. became better and stronger as a consequence."