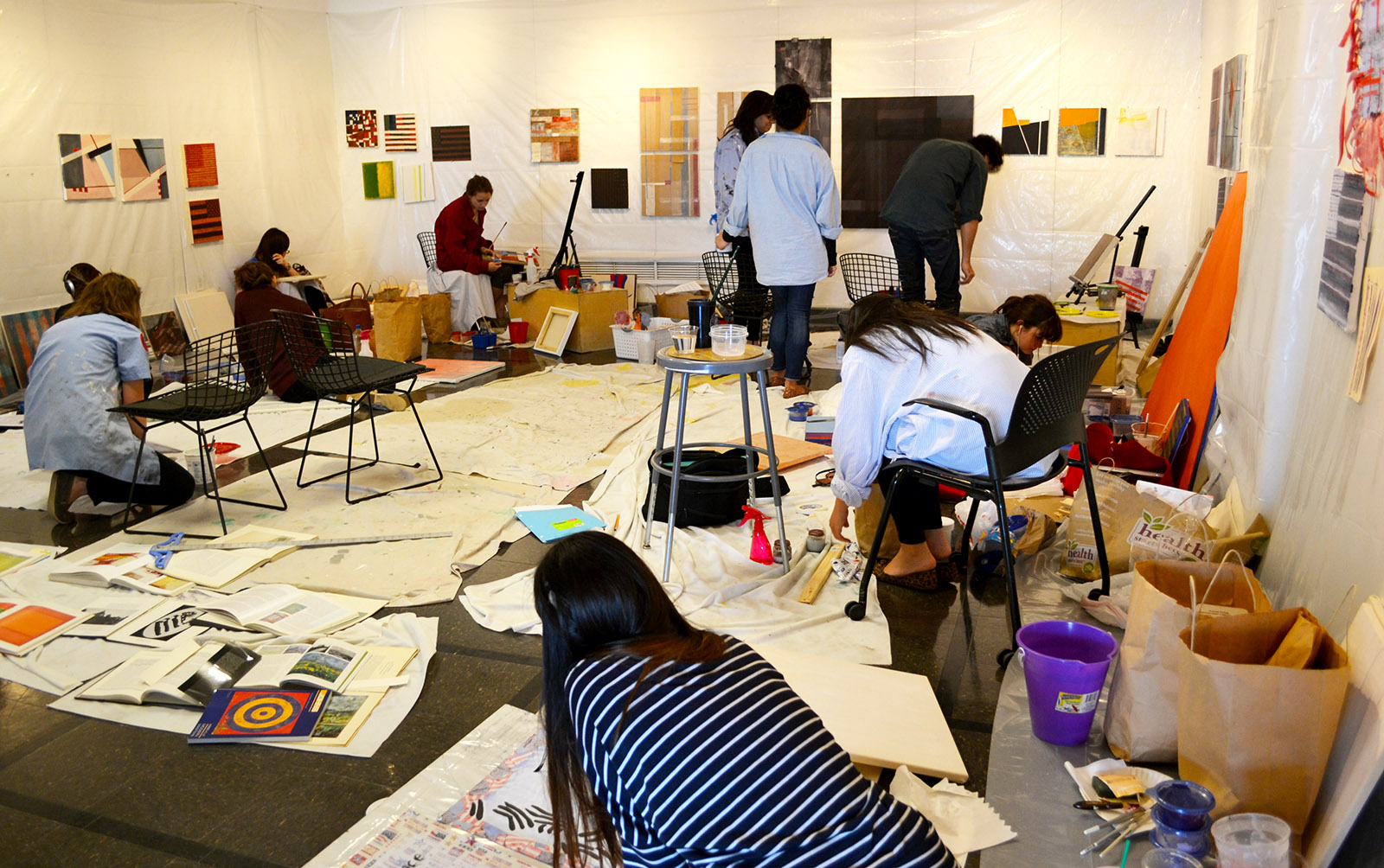 Students in the U.Va. School of Architecture will present their work in a special exhibition and reception, “Painting the American Flag & Works on Paper,” on Friday.

The public event is part of Final Fridays, the monthly showcase of the arts at U.Va. highlighting exhibits, performances and lectures on the Betsy and John Casteen Arts Grounds.

The event will occur in Campbell Hall’s Elmaleh Gallery from 6 to 7 p.m., and will include a gallery talk with Sanda Iliescu, associate professor of art and architecture, and her students.

Students from Iliescu’s spring class, “Paintings and Public Arts as Ethical Metaphors,” will be painting, cutting, gluing and stitching their final project, “The American Flag Transformed,” as well as working on their own individual works in the gallery, changing the space into a public art studio.

Visitors are encouraged to watch out for wet paint and scattered art supplies – and to participate in the process.

At the event, visitors will be provided with paper, pens and pins to leave notes for the artists whose work interests them – which can be pinned next to the student’s work-in-progress.

“I used the American flag in the class because, as images go, it’s a very powerful common ground,” Iliescu said. “Everybody knows it, and everybody has feelings about it.”

“It's a startling composition in many different ways. Impossible to miss, the stars and stripes give students a rich material to work with, both visually and symbolically.”

The “Paintings and Public Arts” course focused on how aesthetic form and ethical content combine to become deeply interrelated ways of seeing and experiencing the world.

During the course, students painted and constructed mixed-media projects. Each artist worked individually and collectively, in teams of two or more, to create larger projects. By working with unusual materials such as sidewalk chalk or painting in public places, the students sought to challenge the regular divide between the art studio and the street.

“This is one of the best courses I have taken while at the University,” said Chase Camuzzi, a fourth-year architecture student. “In class, we learned about color theory and how to create relationships in painting while looking at the works of Bob Slutzky, Rob Rauschenberg, Sol LeWitt and Eva Hesse.

“Most importantly, though, we were given an ample amount of time to paint and experiment while receiving continual critiques from Professor Iliescu.”

In her teaching, Iliescu has continuously sought to deepen the dialogue between the School of Architecture, the McIntire Department of Art and the broader U.Va. arts community.

As a concrete example of how aesthetic form meets ethical content, in response to a rash of sexist and racial graffiti on Grounds in 2005, Iliescu designed the public art project, “271 Words,” in which 271 local citizens and students painted the words of Lincoln’s “Gettysburg Address” on Charlottesville’s Beta Bridge.

“Politically and socially, the United States flag can lead to interesting, if difficult, conversations,” Iliescu said. “The fact that it has been used before by artists from the past, such as David Hammons and Jasper Johns, offers us an opportunity to study and reinterpret precedents in the recent history of painting."