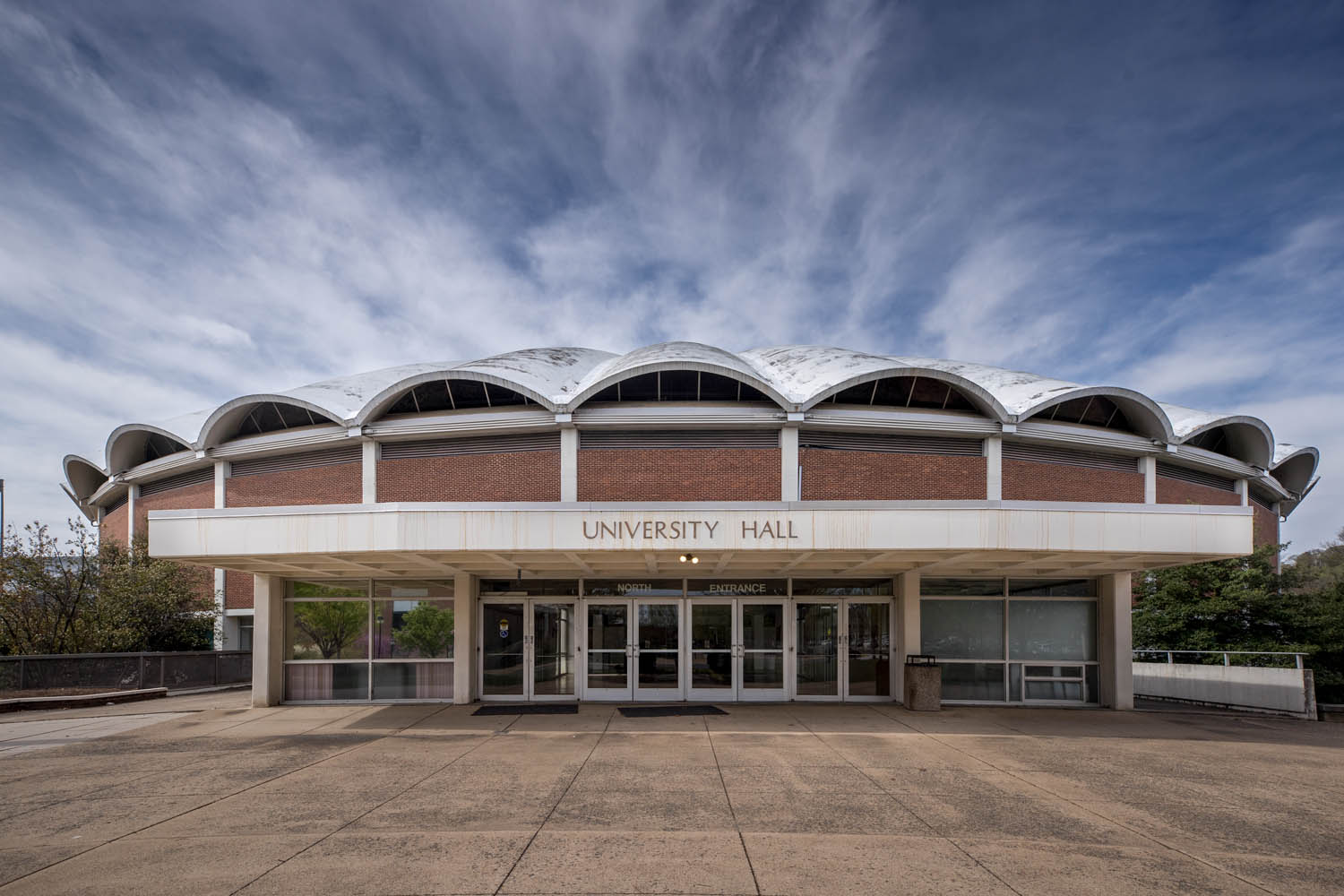 Once considered unique for its multi-purpose design, and frequently the scene of spectacular college basketball, the University of Virginia’s aging and now-outdated University Hall will soon be coming down.

University leaders on Friday approved funding to accompany the addition of University Hall and several adjacent structures to the capital projects plan – a first step in a process that will culminate with the demolition of the building known for its clamshell roof and its shorthanded nickname, “U-Hall.”

A resolution approved by the Board of Visitors’ Executive Committee estimates the cost of the project between $12 million and $14 million. That would include historic documentation, asbestos abatement, relocation of existing offices, actual demolition of the building and several nearby structures, and construction of facilities to support sports medicine and strength-training functions.

While Cavalier men’s and women’s basketball has not been played in University Hall since the 2006 opening of John Paul Jones Arena, the outer ring of the U-Hall concourse continues to house locker rooms and administrative offices for several men’s and women’s sports programs.

Structures adjacent to the main building include Onesty Hall, a multipurpose practice room called “the Cage” and a sports medicine facility. Under the plan, those structures also would be removed. During the work, a series of temporary structures will be located in the parking area adjacent to the Cage and provide space for 10 locker rooms, academic advising, equipment, sports nutrition, offices for staff, maintenance, and student lounge and study areas. Two additional structures will provide spaces for sports medicine and strength training.

If the project proceeds as proposed, asbestos abatement would begin this summer and the facility demolition would be completed by 2020.

University Architect Alice Raucher said a preliminary step includes UVA documenting the history of the building and conducting a comprehensive analysis of the design, condition and importance of University Hall. The report will be part of the University’s formal application for a demolition permit to state officials.

According to the Executive Committee materials, University Hall would require significant repairs to continue operations, including asbestos removal, new roofing, structural improvements and upgrades to infrastructure such as mechanical, electrical and plumbing systems.

Raucher said the recommendation to remove University Hall is part of a larger strategy to better utilize the area of North Grounds in which other athletics facilities are clustered. Those include John Paul Jones Arena, Davenport Field at Disharoon Park, the George Welsh Indoor Football Practice Facility, the McCue Center, Klöckner Stadium and Lannigan Field. The plan includes a recommendation to construct a new varsity softball stadium at the corner of Massie and Copeley roads, currently the site of a grass practice field.

“The goal is to make the area more accessible and connected to the broader University community,” Raucher said. “This project is part of the University’s effort to achieve the long-term planning vision for athletics and North Grounds.”

The U-Hall footprint will be maintained initially as a grass field, which could also provide additional practice space, while the entire athletics area will benefit from improved pedestrian walkways and patterns.

Parking at the University Hall lots will be affected beginning Monday. The Cage lot will be closed due to the start of the project’s relocation phase, which will affect about 420 student-athletes and 60 coaches and staff. Additional parking for Blue permit holders is available in the John Paul Jones Arena lots. Other parking near the Cage lot will be affected in the future.

When opened in 1965, University Hall became the first major expansion in that area of UVA property, and was the largest enclosed structure on Grounds. According to the Executive Committee background, the “size, siting and overt modernism of the building set the tone for the University’s development of the North Grounds.”

The first Virginia basketball game there was played against the University of Kentucky in December 1965, but the first event was a concert by the Czech Philharmonic Orchestra a month earlier.

It’s Copperhead Season in Virginia. Here Is What You Need to Know END_OF_DOCUMENT_TOKEN_TO_BE_REPLACED

What’s Next for UVA’s Class of 2022? END_OF_DOCUMENT_TOKEN_TO_BE_REPLACED