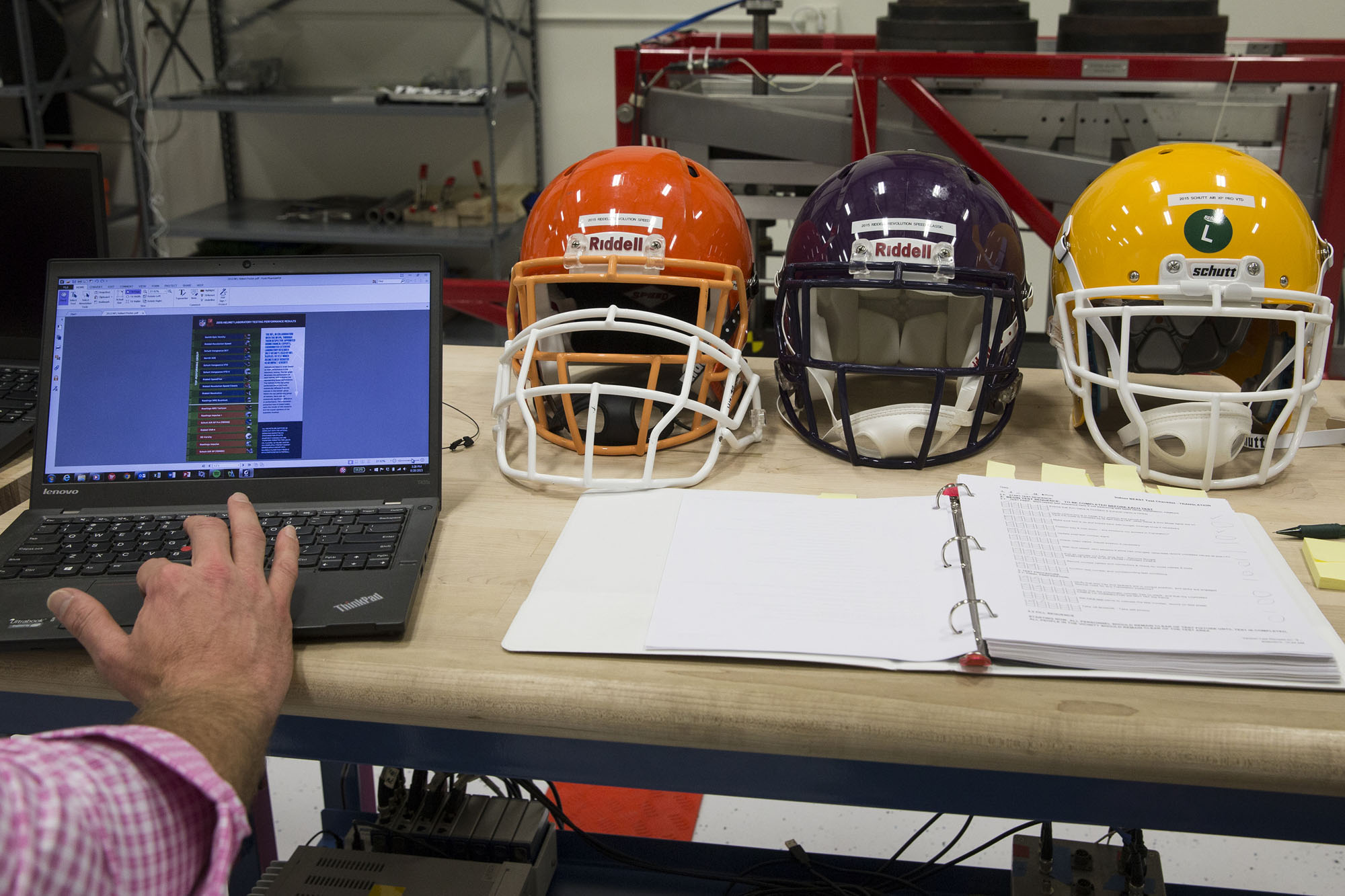 Jeff Crandall and Richard Kent are evaluating a range of helmet models.

Stories about football injuries are in the news almost daily.

As a result, football leagues are making proactive and concerted efforts to reduce the number and severity of short- and long-term injuries to their players. The National Football League, for example, has set up more than a dozen injury safety committees, subcommittees and panels devoted to different regions of the body, as well as a committee focusing on turf safety. These groups include independent medical and scientific experts specializing in injury prevention.

Enter a couple of car crash test experts: Jeff Crandall and Richard Kent, biomechanical engineers at the University of Virginia. They take the principles involved in making cars safer and apply them to the testing of the protective equipment used by football players. Their goal is to determine which pads, helmets and shoes work best to protect players from injury while also allowing players to perform at top levels.

“The force levels generated in some car crashes are comparable to some impacts in elite-level football, so the auto safety world can bring science and engineering principals to inform the sports world,” said Kent, a professor of Biomedical, Mechanical and Aerospace Engineering and deputy director of U.Va.’s Center for Applied Biomechanics. “In both worlds, there’s no reason injuries can’t be minimized.”

Kent and Crandall have spent their careers testing the safety features in automobiles and making safety recommendations to the government and to car manufacturers. They are masters at designing and engineering repeatable tests for a range of safety components.

So it came naturally for them to set up a range of devices for testing football safety equipment, head to toe: helmets, shoulder pads, thigh and knee pads, and footwear, and for better understanding the mechanics of shoe/turf interaction.

“Through its various safety committees, the NFL has made rule changes reducing concussions in regular season games by about 35 percent since 2012,” Crandall said. “The league is really working hard to track and document every injury, to learn from these injuries, and to make alterations to the way the game is played and the type of safety equipment used.”

Those conditions involve finding a match for maximizing player performance with a lowered chance for injury.

“We’re trying to get safety more prominent in the conversation for players who are focused on their own performance as athletes,” Kent said. “We’re trying to change the view that performance, such as speed, is the only consideration.”

Take football shoes, for example. Kent and Crandall have found that the inside dimensions of football shoes don’t necessarily comply with stated shoe size, and can vary greatly from model to model and manufacturer to manufacturer. They discovered that the majority of elite football players were wearing shoes that didn’t fit properly.

They came up with a solution: a new shoe-sizing device that helps equipment managers and players identify shoes that precisely match the dimensions of a player’s feet. In addition, they have developed a module to help train equipment managers on proper techniques for measuring feet and sizing footwear. This has resulted in more players wearing correctly sized shoes – those that both enhance performance and may help reduce foot and lower-leg injuries.

Shoe companies have taken notice, they say, using the device to bring consistency and uniformity to shoe sizes.

“There’s a razor-thin line between performance and safety,” Crandall said. “We’re working on that cutting edge.”

Here Is What You Need to Know About the New Coronavirus Variant, Omicron END_OF_DOCUMENT_TOKEN_TO_BE_REPLACED

Fall Is in the Air on Grounds END_OF_DOCUMENT_TOKEN_TO_BE_REPLACED

Meet the Cats and Dogs Your CVC Donation Supports END_OF_DOCUMENT_TOKEN_TO_BE_REPLACED