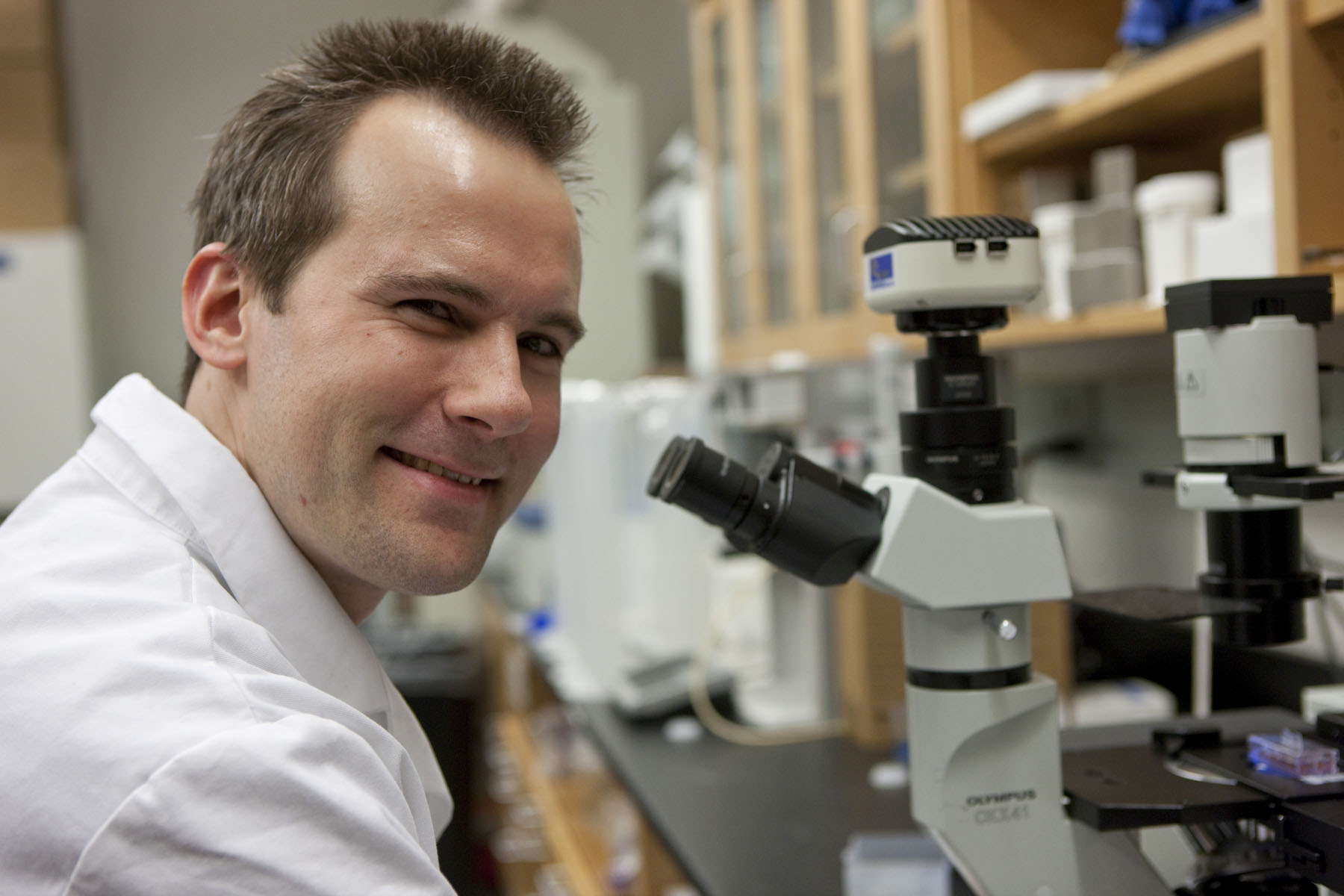 U.Va. assistant professor of biomedical engineering Kevin Janes uses his expertise in computational modeling in his research of tumors.

When Kevin Janes considers a tumor, he imagines the population of a dark and dystopian city. Originally colonized by the descendants of a single malignant cell, the tumor grows more diverse over time, as its inhabitants recruit different types of cells to join them and its cell of origin begins to evolve under the pressure of natural selection.

“Seen in this light, treating a tumor is like managing a volatile and unruly mob,” said Janes, a University of Virginia assistant professor of biomedical engineering. “Some of the cells may be truly bad actors, while others are swept along by circumstances.”

Janes has found just such a group. He has demonstrated that some cells found in breast cancer are not always malignant, but are affected by their relationship to the extracellular matrix that surrounds them. Depending on the signals that pass between them and the matrix, the cells grow and migrate uncontrollably or act like normal cells. They exist in two very different states.

“If you’re uniformly aggressive, that mob of cancer cells could fragment and become even more dangerous,” he said. “A more productive therapeutic approach might be to consider the tumor ecology.”

Janes advocates focusing on those cells that change their state depending on the surrounding environment and finding ways to steer them to a more benign state or one that might be more susceptible to existing treatments.

The design of this experiment reflects Janes’s expertise as a computational modeler. His goal in this case was to steer a middle course between creating a generalized atlas of the tumor and creating a census of individual cells, which would be both time-consuming and impractical. “We want to come at this problem with just the degree of specificity needed to highlight the heterogeneity and variability of cells within a tumor,” he said.

Guided by his models, Janes adopted a strategy of measuring all the genes expressed in small samples taken at different locations across a tumor. “The technique is designed to identify states that recur with reasonable frequency,” he said. “The models gave us an understanding of the sample size we needed to produce reliable results.” Janes also uses computational analysis to extract as much information as possible from his experimental data.

This computational work, Janes said, builds on modes of thought he brings to the problem as an engineer. “Engineering is the art and science of making effective compromises,” he said. “We start with an end goal, and we identify the approximations that will enable us to approach this goal. As an engineer, I would rather arrive at a good-enough answer today than a perfect answer never.”

Moving forward, Janes hopes to test his findings about breast cancer cells in a therapeutic context. “We think we have found a protein that triggers these state changes,” he said. “Using this knowledge, we would like to see if we can move these cells to a more tractable state where they would be less invasive. Long-term tumor stasis would be a worthwhile goal.”

Janes would also like to migrate his studies directly to clinical specimens of breast tumors. “We used three-dimensional tissue cultures to demonstrate proof of concept,” he said. “We now have the confidence to make the leap directly to clinical samples.” Janes would like to analyze a subset of breast cancers, catalog the states observed and determine if the inventory of states or the proportion of states change from less advanced to more advanced tumors.