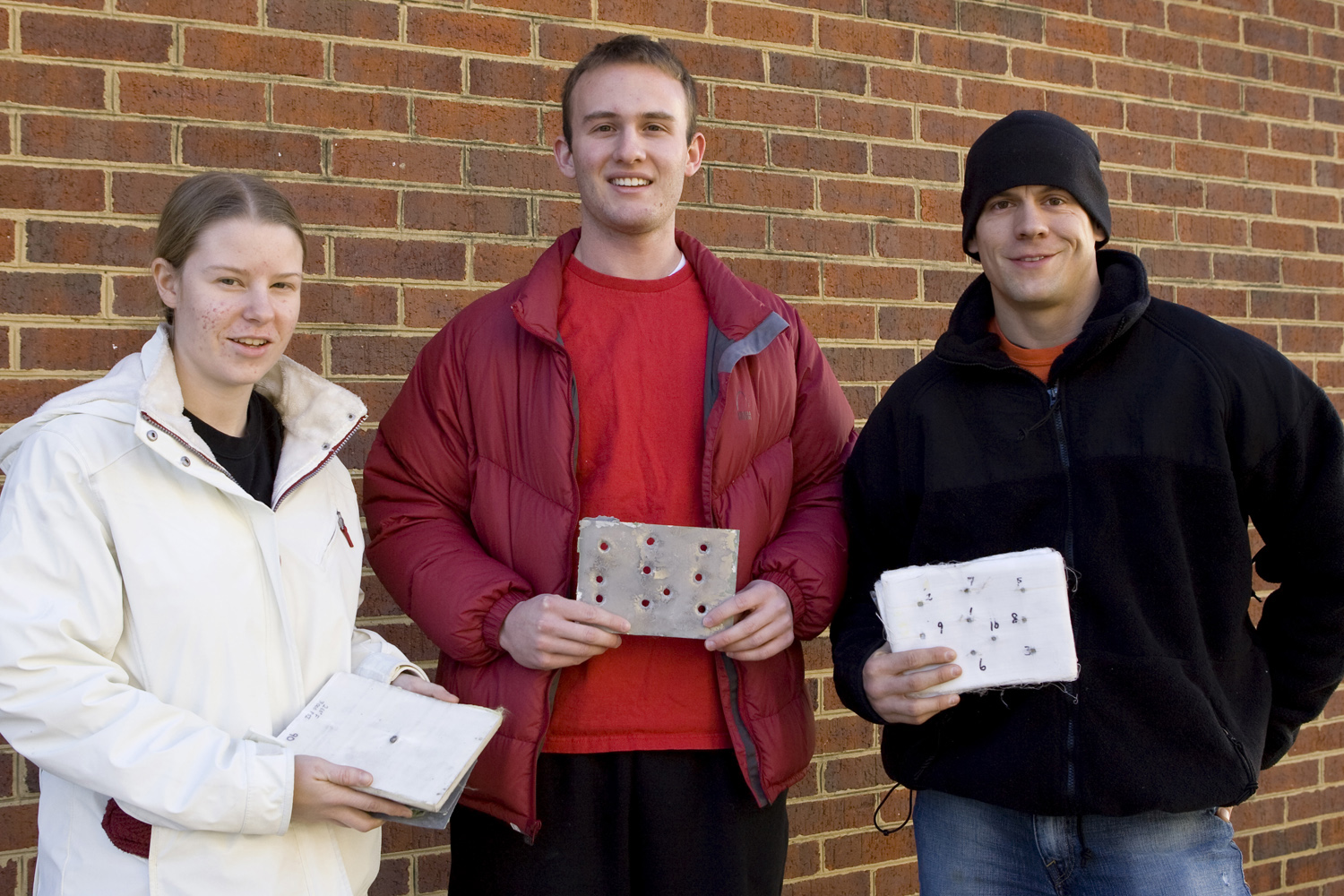 January 22, 2009 — When Jeff O'Dell was a soldier in Iraq in 2005 and 2006, he wore standard-issue "body armor" that could stop a single armor-piercing bullet. But a second shot to the same area could kill.

Today, O'Dell is a second-year biomedical and mechanical engineering student at the University of Virginia designing a new type of body armor that can withstand multiple impacts from armor-piercing rounds. His design also is more flexible and will weigh less than the current 30-pound vest used by the U.S. military in Iraq and Afghanistan.

O'Dell began work on his idea last year while taking a biomedical engineering design course as part of his major. He formed a team with students Dan Abebayehu, Ann Bailey, David Holland and Adam Rogers and they tested their design at H.P. White Laboratory, a ballistics testing lab in Street, Md. The armor they've designed, made from a unique configuration of ceramic plates, has stopped as many as eight of 10 armor-piercing rounds during tests.

"This could save lives on the battlefield," O'Dell said simply.

Biomedical engineering students at U.Va. begin to attack real-world problems in the first semester of their second year. They use design to address important problems throughout their undergraduate career, with their efforts culminating in a senior year "capstone" project that pulls together all of their training and analytical methods. The capstone project often results in a viable new product prototype.

"We emphasize and demand entrepreneurship and innovation from our students to solve real problems in the real world," said Bill Walker, associate professor of biomedical engineering and design instructor. "We teach the fundamentals and lab skills needed, and then place the students onto independent projects."

But the students are not alone. Besides their engineering professors, they work with non-engineering mentors, including physicians and nursing professors and researchers in other disciplines. They often find corporate support.

Among the 32 senior undergraduate projects in the biomedical engineering capstone program this year are a cell-based therapy for healing wounds, a new monitor for heart disease and a drug for targeting pathogens.

During the past four years, the results from 27 undergraduate biomedical engineering capstone projects have been published in peer-reviewed journals. Twelve projects led to provisional patents and three to full patents, and two have been licensed to commercial interests.

This year, the National Collegiate Inventors & Innovators Alliance awarded two undergraduate design teams $16,000 each — one that is designing a device to improve gallbladder surgeries, and another designing a device for improving treatment of postpartum hemorrhaging following a Cesarean delivery.

"Students select their own projects and the problems they want to solve; they form teams and then brainstorm," said Timothy Allen, an assistant professor of biomedical engineering and an advanced design instructor. "It is a highly creative and regimented process to complete and validate a project in engineering."

The capstone project requires about 12 hours per week of each student's time, outside of class, for the full fourth year.

"Our students really have to get in the lab, work with their hands, and build and test their designs," said Shayn Peirce-Cottler, an assistant professor of biomedical engineering who teaches the capstone design class. "They work side-by-side with doctors, nurses and even patients to get the kind of input that will carry their designs to a practical level."

The results can be amazing. One device, which is designed to allow obstetricians to practice certain medical procedures before working on an actual patient, has been complimented by a physician for "feeling just like a real uterus." The device can help doctors reduce medical errors.

The O'Dell team's body armor project is drawing the interest of the military. A team of experts from the U.S. Army will visit the H.P. White Lab in March to observe a ballistics test.

O'Dell, now a sergeant in a National Guard unit in Tennessee, is scheduled to deploy to Afghanistan later this year.

"It would be cool if I could get to wear the armor I helped design," he said.

For All of Us END_OF_DOCUMENT_TOKEN_TO_BE_REPLACED