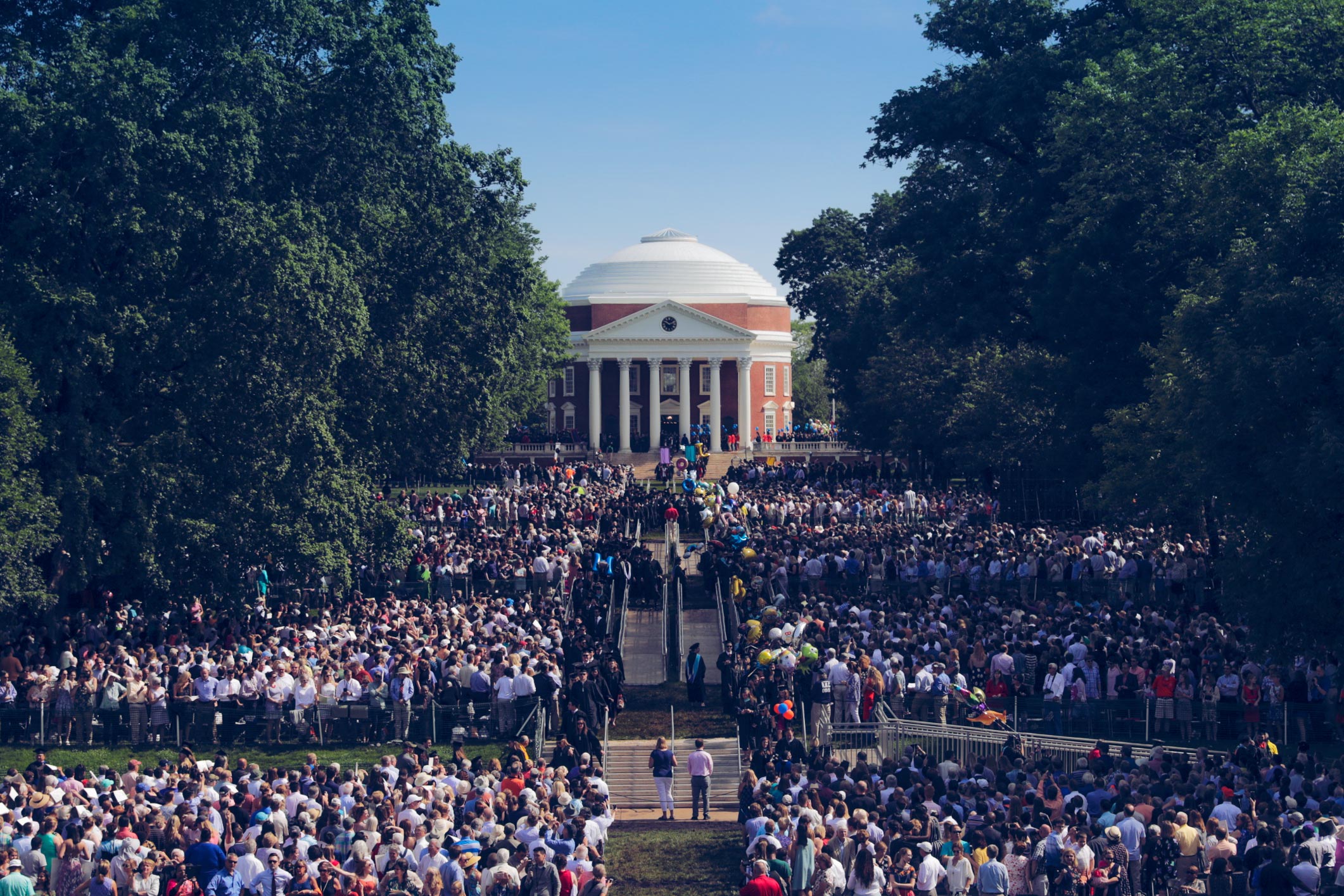 Tens of thousands of people will descend upon the University of Virginia’s Grounds May 17 through 19 for Finals Weekend, the celebration culminating the 2018-19 academic year. Here’s what’s on tap for graduation weekend.

The festivities kick off Friday at 3 p.m. with Valedictory Exercises on the Lawn. Virginia Beach native and musician Pharrell Williams will be the keynote speaker.

A recording artist, Williams is also a producer, songwriter, philanthropist, fashion designer, author and entrepreneur. He co-produced and co-scored the Oscar-nominated film “Hidden Figures,” written by best-selling author and UVA alumna Margot Lee Shetterly. He performed at “A Concert for Charlottesville,” held in September 2017 in UVA’s Scott Stadium in response to the violent “Unite the Right” rally in Charlottesville a month earlier.

He has received 13 Grammy Awards and the American Society of Composers, Authors and Publishers’ Golden Note Award.

The traditional kickoff event of Finals Weekend, Valediction is also the time when the Class of 2019 will present class gifts and receive University awards. Valediction is free and open to the public. (In the event of inclement weather, the ceremony will be moved to John Paul Jones Arena; seating will be on a first-come, first-served basis, with doors opening at 1:30 p.m.)

The auditorium will also be the site of the “Donning of the Kente” ceremony at 6 p.m. Tickets are required for this event sponsored by the Office of African American Affairs.

Webb participated in a yearlong White House Fellowship Program in 2016, during which he worked on President Barack Obama’s “My Brother’s Keeper” initiative, launched in 2014 to address persistent opportunity gaps facing boys and young men of color. He also served on the White House Health Care Team and helped lead a White House Drug Pricing Task Force.

The Frank Batten School of Leadership and Public Policy will hold its regalia ceremony at James Monroe’s Highland, 2050 James Monroe Parkway, at 5 p.m.

May 19: Final Exercises for Other Schools and Institutes

The speaker will be Dorrie K. Fontaine, retiring dean of the School of Nursing.

Fontaine, a critical care and trauma nurse, has been Sadie Heath Cabaniss Professor of Nursing and dean of the School of Nursing since 2008.

Among the hallmarks of her 11-year tenure at UVA has been a focus on creating a healthy work environment, including compassionate care; interprofessional education, where nurses and physicians train together; and creative efforts for inclusion and diversity.

In 2009, Fontaine founded UVA’s Compassionate Care Initiative, with a mission of alleviating human suffering through developing compassionate people and systems. The initiative nurtures students, faculty, staff and clinicians to become resilient and know that caring for themselves provides a foundation for the safe and exceptional care of others.

Degrees awarded: The University will bestow 7,090 degrees this year, including:

Weather: In the event of severe weather on either Saturday or Sunday, Final Exercises will take place at John Paul Jones Arena.

Security: Everyone attending Valedictory Exercises and both Final Exercises ceremonies, including graduates, faculty and guests, will be subject to security screening before entering the Lawn or John Paul Jones Arena. All bags must be in compliance with the University’s clear bag policy. Metal detectors will be used at the designated entrance points onto the Lawn and all entrances to the John Paul Jones Arena.

Should Alcohol Have Warning Labels About Cancer Risk? Most Americans Say ‘Yes’ END_OF_DOCUMENT_TOKEN_TO_BE_REPLACED