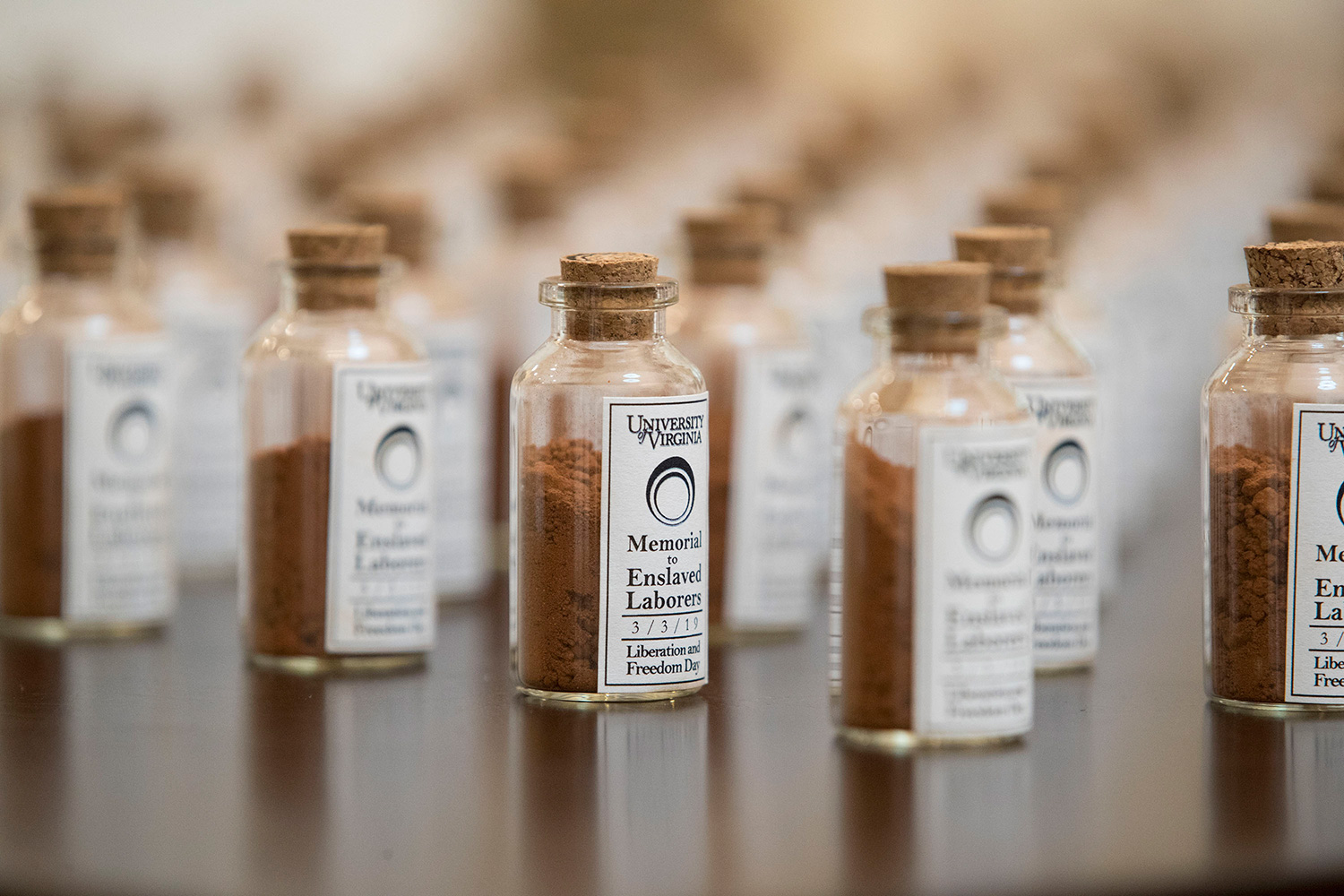 Commemorative vials of soil from the memorial construction site were given away, the same kind of soil enslaved laborers might’ve used to make the bricks seen in the Academical Village. (Photos by Dan Addison, University Communications)

The songs and sentiments honoring the enslaved laborers who helped build and maintain the University of Virginia sounded bright and clear in a Rotunda Dome Room ceremony Sunday afternoon, even if the sun wasn’t shining outside.

Among several local events this weekend for Liberation and Freedom Day, which commemorates the ending of slavery in the City of Charlottesville and Albemarle County on March 3, 1865, the University held an additional ceremony: for the Memorial to Enslaved Laborers, which is in the early stages of construction.

A blessing ceremony was going to be held at the memorial site on the triangle of grass next to Brooks Hall, but the steady rain caused it to be relocated inside.

Sunday’s events brought a crowd of more than 100 people to the Dome Room. The ceremony included remarks by University students and officials, local pastors, members of the memorial design team and the local community. All of the speakers commented on the importance of the occasion and the project. 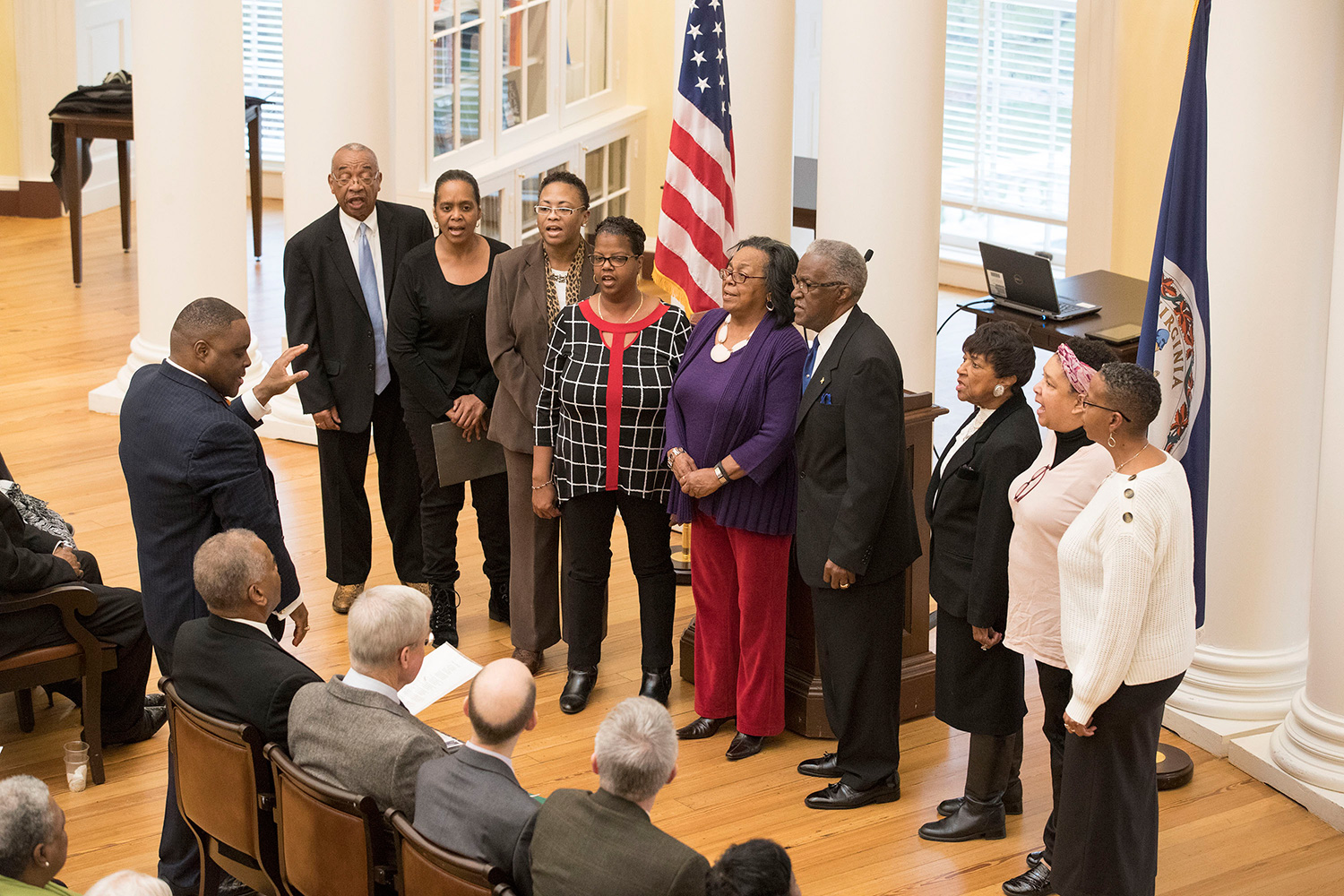 Rev. Xavier Jackson, a 1987 UVA alumnus, led a choir from the Chapman Grove Baptist Church who sang for the crowd that filled the Rotunda Dome Room on Sunday for the Liberation and Freedom Day and Memorial to Enslaved Laborers ceremonies.

As with other institutions and locales across the nation in recent years, the University and the City of Charlottesville each have striven to recognize the role of slavery in their history.

In 2013, the President’s Commission on Slavery and the University was formed, and after a community engagement process, recommended a memorial. In 2016, the UVA Board of Visitors selected the Boston architectural firm Höweler+Yoon to design the memorial.

President Jim Ryan proposed a plan to allocate $2.5 million from the Strategic Investment Fund to establish a one-for-one matching fund for private gifts to the memorial construction fund through 2019, which the board endorsed.

Blessing for the Memorial to Enslaved Laborers

Construction is underway for significant site work by general contractor Team Henry Enterprises on the “triangle of grass” across University Avenue from the Corner, including re-grading, utility work, laying a concrete foundation, improving stormwater management and sidewalks, and, ultimately, the installation of the large-scale stone blocks of the memorial.

Conceived by students almost 10 years ago, the idea for a memorial was continued by the President’s Commission on Slavery and the University. A design team engaged UVA and local communities in months of discussions as it developed the final concept, and the board approved the recommendation for the memorial’s design and location in June 2017.

“It’s been an extraordinary experience to be involved in this project,” said UVA alumna Mabel Wilson, a member of the memorial design team and a professor of architecture at Columbia University. The team spent countless hours listening to students, faculty, staff and community members who wanted the memorial to tell the truth, she said.

The memorial’s design is both intentional and symbolic. Wilson described the concentric rings being designed to represent slavery’s broken shackles and the path to freedom. The outer ring will be sculpted with the subtle image of the eyes of Isabella Gibbons, a former slave who became a teacher after Emancipation, while the innermost ring will bear 973 names of those known to have been enslaved at UVA, and will include placeholders for the estimated 4,000 names that have yet to be found. 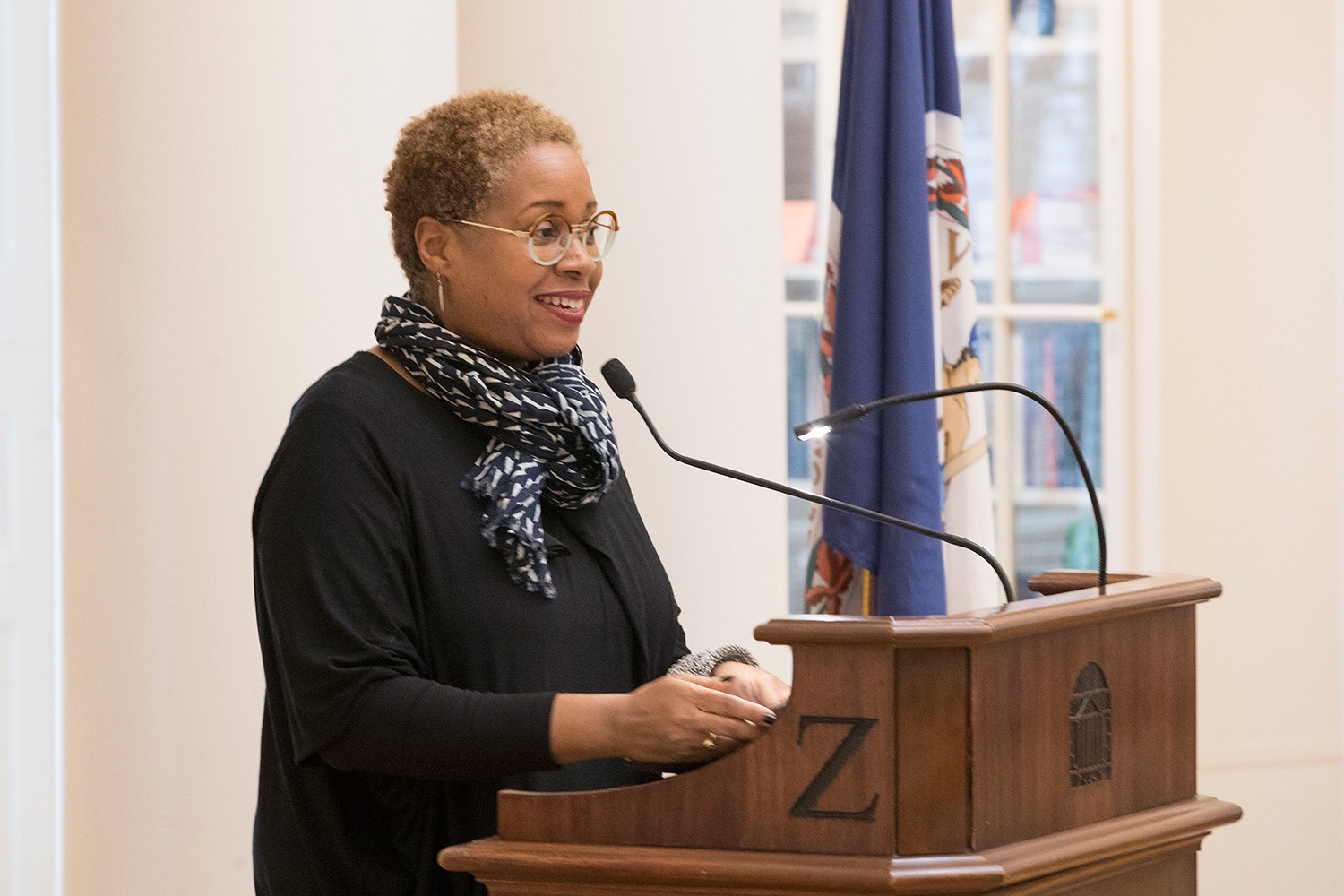 “It’s been an extraordinary experience to be involved in this project,” said UVA alumna Mabel Wilson, a member of the memorial design team and a professor of architecture at Columbia University.

An important aspect of the design is that the rings will form a space that will encourage gatherings – from informal meetings to classes or performances. “It’ll be a site for learning and contemplation,” Wilson said.

The memorial’s outermost diameter matches that of the Rotunda and it will be made of the same granite as the Rotunda’s upper terrace.

The two rings even feature on the commemorative vials of the tell-tale red clay Virginia soil from the memorial construction site that were given away, the same soil enslaved laborers used to make the bricks that are seen and walked on every day. Student interns Wade Goodrich and Tabitha Sabky worked on designing the keepsakes.

Rev. Xavier Jackson, a 1987 UVA alumnus, gave a short homily and then led a musical group from his church, the Chapman Grove Baptist Church, in two rousing spirituals. Sarah A. Kelley, pastor of the Faith, Hope and Love Church of Deliverance, also gave a prayer and sang a hymn to the crowd, some of whom harmonized softly.

Jackson said the memorial will draw attention to remembering the enslaved laborers, will serve as a teaching tool, and also stand as cultural inspiration to recognize their pain and tears, and the greatness of their work.

In 2016, the Charlottesville City Council established the Blue Ribbon Commission on Race, Monuments, and Public Spaces, and tasked it with “changing the narrative on race” in the city.  The commission drew attention to the events of March 3, 1865, which led to the City Council making the proclamation.

Saying the University must not only honor the past, UVA Vice Rector Jim Murray outlined areas of improvement the University will work on to help shape a better future.

Dr. Marcus Martin, UVA’s vice president and chief officer for diversity and equity, recounted the story of March 3, 1865. As Union forces approached around 4 p.m. that day, UVA rector and faculty members and the mayor of Charlottesville together waved the white flag of surrender from the foot of Carr’s Hill at the site of the current UVA Chapel, thus relinquishing Charlottesville and the University to the authority of U.S. Gens. George Custer and Philip Sheridan, who guarded the University against damage and were there to enforce the 1863 Emancipation Proclamation. Numerous individuals, including members of UVA’s enslaved community, and their families took the opportunity to escape bondage, many becoming refugees behind Union lines.

The UVA Office of the Vice President and Chief Officer for Diversity and Equity sponsored Liberation and Freedom Day activities at UVA with the following co-sponsors: the Memorial to Enslaved Laborers Community Engagement Committee; Albemarle County Office of Equity and Inclusion; UVA Carter G. Woodson Institute for African-American and African Studies and the Citizen Justice Initiative; Charlottesville City Council; Jefferson School African American Heritage Center; National Association for the Advancement of Colored People at UVA; Thomas Jefferson Foundation at Monticello; United Ministries; UVA Bicentennial with funding provided by the Alumni Board of Trustees; and Virginia Humanities.

The Bigger Picture: Starry Night in the Rotunda END_OF_DOCUMENT_TOKEN_TO_BE_REPLACED