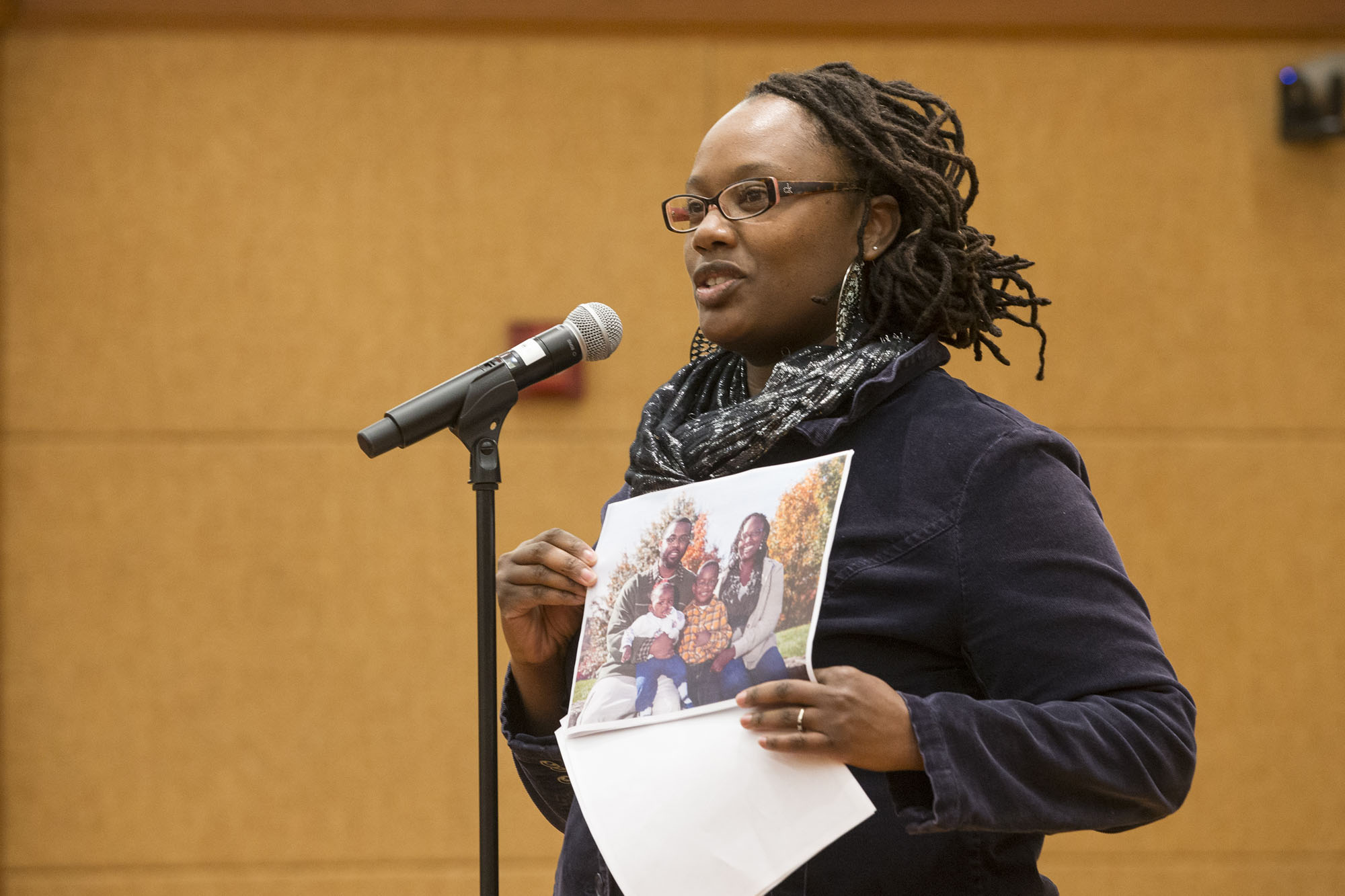 Because she has three black sons. Because her black mentor never put her in a different category as a white person. Because all human life matters.

These were some of the reasons given for why “black lives matter,” the focus of Friday’s event sponsored by the University Library as part of the University of Virginia’s 2015 community celebration in honor of the Rev. Dr. Martin Luther King Jr.

More than 20 people went up to the microphone in the auditorium of the Harrison Institute /Albert and Shirley Small Special Collections Library, one by one, to add their voices in speaking about why “Black Lives Matter” to an audience of about 50 employees, students, faculty and local residents.

“The theme of this year’s Martin Luther King community celebration is ‘Giving Voice,’ and our event gives people an opportunity to demonstrate who we are and why we’re valuable,” said co-organizer Tobiyah Andrews of the University Library’s Human Resources department.

In speaking to the audience, she held up a photo of her family, whose love reminds her of why her life matters, she said.

Andrews and colleague Jennifer Harmon wanted to come up with a way to bring people together and emphasize their human connections. They were inspired by the national group, “Black Lives Matter,” Andrews said. It was formed after George Zimmerman was acquitted for shooting Trayvon Martin, an unarmed black teen, in 2012.

Speakers at Friday’s meeting shared their thoughts, fears, worries and ideals. Some of them talked about what they learned of their family history, especially related to the Civil Rights Movement.

A mother of three sons, Harmon said she has to remind them to be careful, because someone could consider them dangerous. “I worry about them every time they leave the house,” she said.

Ray Johnson, a library worker, said he learned a police officer could consider him threatening if he folded his arms. One time when Johnson was driving his mother and several aunts to another relative’s house, he was stopped without knowing why. He didn’t have his license with him because they had switched cars at the last minute and he had left it behind. After Johnson explained that to the officer and asked for leniency, he folded his arms in frustration. The police officer put his hand on his holstered gun, telling Johnson the pose was threatening.

That’s the kind of situation you have to weigh, said William Woodson, an older man who grew up in Buckingham. He talked about an incident in which he felt a police officer was harassing him, and he had to decide whether it would be worth the hassle to report the officer.

Petrina Jackson, who heads instruction and outreach for the Albert and Shirley Small Special Collections Library, said it was also important to fill in the gaps about black life in U.Va.’s history, including materials about African-Americans on Grounds, especially students. The same goes for African-American history; she brought a copy of “David Walker’s Appeal to the Colored Citizens of the World,” published by a black man in 1829 and calling for the abolition of slavery – a dangerous act at the time.

In considering his family history, Lee Williams, a former U.Va. Advancement employee who’s now pursuing a doctorate in the Curry School of Education, said he didn’t appreciate, as a light-skinned biracial child, what his black father endured through his life, and wished he had told his father, now deceased, how much his life mattered.

Music librarian Winston Barham said he has made a point of studying the Civil Rights era, because his white father was a youth minister in Mississippi when his church and a black church merged in 1964, and he wanted to learn more about it.

“I see the fear in the world – we fear what we don’t understand,” Barham said. “If we take the time to understand, then we can overcome the fear.”

Makeda Petiri, a first-year student who said she likes spoken-word poetry, mentioned that the theme of “Black Lives Matter” made her think of poet Suheir Hammad, who ended her work, “First Writing Since” after Sept. 11 with these words:

U.Va.’s Office for Diversity and Equity collaborated with a local committee to plan activities through Jan. 30 that include panel discussions, plays, films and speakers, with the help of dozens of U.Va. student groups, departments and offices, nonprofit organizations, such as the National Association for the Advancement of Colored People, and area schools. For a complete schedule, click here.

Monkeypox Is Spreading, But University’s Risk Believed To Be Low END_OF_DOCUMENT_TOKEN_TO_BE_REPLACED

Q&A: Assessing the Risks and Rewards of Pelosi’s Plan to Visit Taiwan END_OF_DOCUMENT_TOKEN_TO_BE_REPLACED

These Giant Wind Turbines, Inspired by Palm Trees, May Be the Future of Renewable Energy END_OF_DOCUMENT_TOKEN_TO_BE_REPLACED