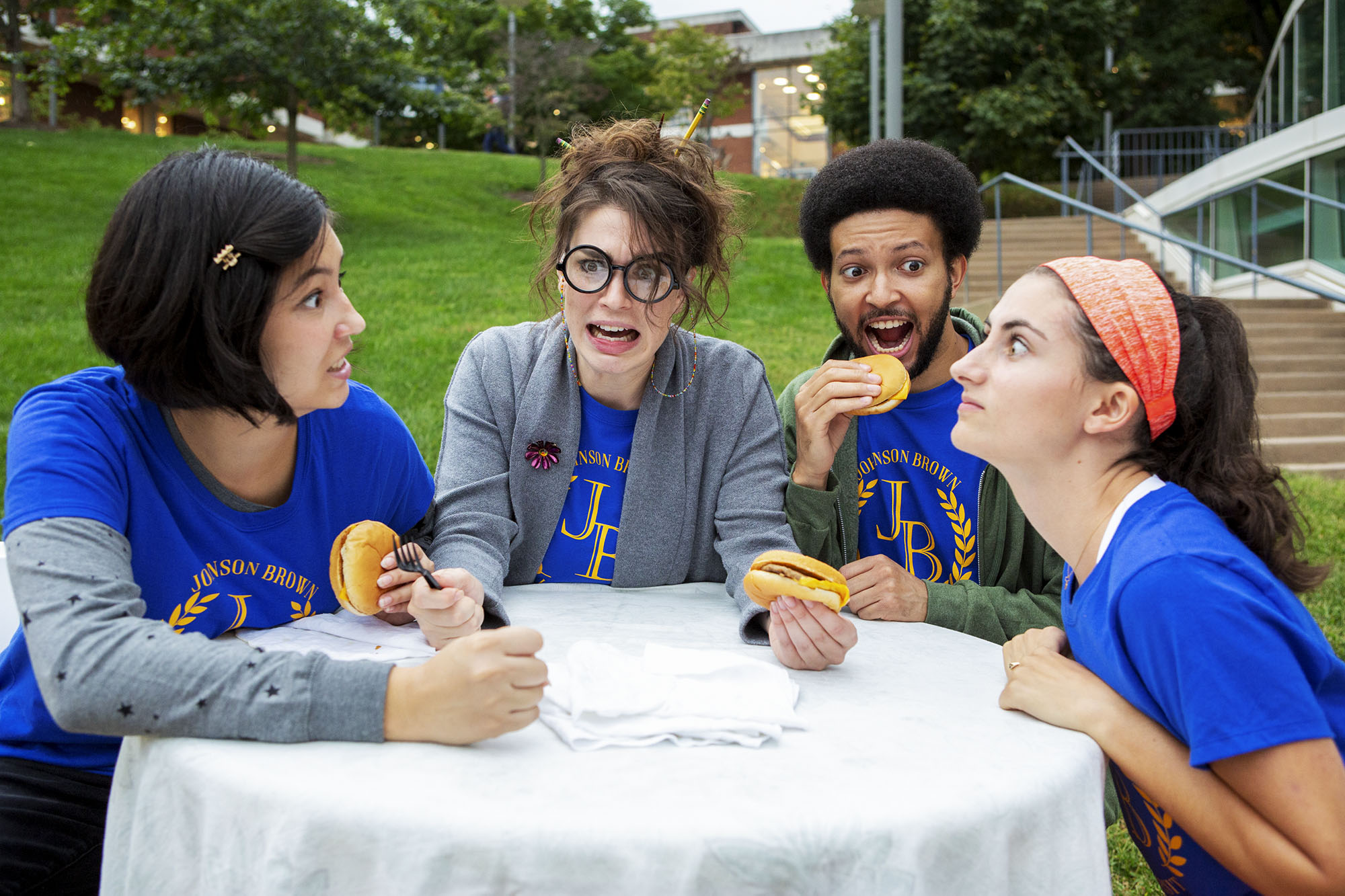 The University of Virginia’s Department of Drama is returning to the stage this fall with a live audience, beginning its 2021-22 season Thursday. The shows, performed by graduate and undergraduate students, are commentaries on societal and environmental challenges in the modern world.

Marianne Kubik, the department’s artistic director and a UVA associate professor of drama, witnessed the reclaim of the stage in real time.

“Everybody seems so happy,” she said. “I can see it around the building, the lobby of the drama building is huge and has all of these different sitting areas, and now they’re filled again.

“There is a richness in gathering together, in sharing a communal experience and being able to laugh and to cry. We are thrilled to share that experience with audiences this year.”

Below is a guide to the new season’s productions:

The first show this season, written by Leah Nanako Winkler and directed by Michael Jerome Johnson, is set at the fictitious Johnson-Brown University during Diversity Awareness Week, during a diversity training exercise for the employees of the tele-FUN-draising department.

“This show purposefully uses comedy and absurdism to pull real issues to the surface,” Kubik said. “It highlights the ignorance and awkwardness among its characters as they try to find ways to break through their biases, be honest with one another, and get along. It illustrates the honest struggle many are having with themselves.”

The show will run at Ruth Caplin Theatre:

Tickets are $14 for adults; $12 for UVA faculty and staff, members of the UVA Alumni Association, and seniors; and $8 for students. Tickets are available now at the UVA Arts Box Office in the Drama Building on Culbreth Road and online.

Editor's Note: On October 8 the UVA Drama announced the cancellation its first show of the 2021-2022 academic season, “Diversity Awareness Picnic.”

All ticket holders for “Diversity Awareness Picnic” may contact the UVA Arts Box Office for refunds.

“When the Rain Stops Falling”

Written by Andrew Bovell and directed by Kubik, this play takes the audience through an emotional journey spanning four generations from 1959 to 2039. The play asks viewers to examine worsening climate change across two continents and their relationships with each other and with planet Earth.

The play will also feature large-scale digital projections that will offer an additional visual experience, produced by digital media artist Mona Kasra, an associate professor in UVA’s Department of Drama.

“The projections are going to be complementing and also complicating the story. They will also help the audience determine space, time and weather,” Kasra said. “I’m going to be filming some of the actors prior and use a few of the pre-recorded materials as projections. It’s going to be an interesting collaboration.”

The show will run at Culbreth Theatre:

“How to Live on Earth”

Opening in February and directed by Matt Radford Davies, this moving story by M.J. Kaufman was inspired by the Mars One project. Four people are short-listed for the frontier adventure of a lifetime. The place: Mars. The catch? They can never come home.

“I call this the driving play of the semester,” Kubik said. “We are really grappling with the people in our lives at this moment. These characters find themselves thinking about things they had not thought of before in their relationships, bringing up deep issues about our destiny and our lifespan, about whom we leave behind, and whom we really want to keep in our lives.”

The show will run at Ruth Caplin Theatre:

This play, written by Mary Elizabeth Hamilton and directed by Kate Eastwood Norris, wraps up the season. Condemned by her husband for infidelity, the queen of Sicilia fakes her death and hides in a cabin in the woods in this story that imagines the 16-year interval in Shakespeare’s “The Winter’s Tale.”

“This play was commissioned several years ago by the American Shakespeare Center as an invitation to write a play inspired by Shakespeare, but in modern language,” Kubik said. “It’s our lightest play of the year, and a great way to end our season on a celebratory note.

“Each character in the play finds themself in an unexpected wilderness, moving forward through a changed world with no game plan – illustrating how ingrained a reliance on past methods is when facing the biggest challenges in our world.”

The show will run at Culbreth Theatre:

“For performances, the actors are masked and we have cordoned off the first row in the house to offer greater distance between actor and audience,” Kubik said. “We’ve also limited the number of tickets available per night. There will still be plenty of tickets, but we’ve added limitations so that the audience feels a little bit safer and they have the opportunity to distance if they’d like to.”

Parking for UVA Drama performances is available at the Culbreth Road Parking Garage, located alongside the theaters.

Click here for more information on the 2021-22 UVA Drama season.

Meet the New Cavalier on Horseback: She’s Eager To ‘Carry On a Legacy’ END_OF_DOCUMENT_TOKEN_TO_BE_REPLACED

Monkeypox Is Spreading, But University’s Risk Believed To Be Low END_OF_DOCUMENT_TOKEN_TO_BE_REPLACED

Virginia Football – For All Virginia END_OF_DOCUMENT_TOKEN_TO_BE_REPLACED