For U.Va. Departments in Need, Super Temps to the Rescue 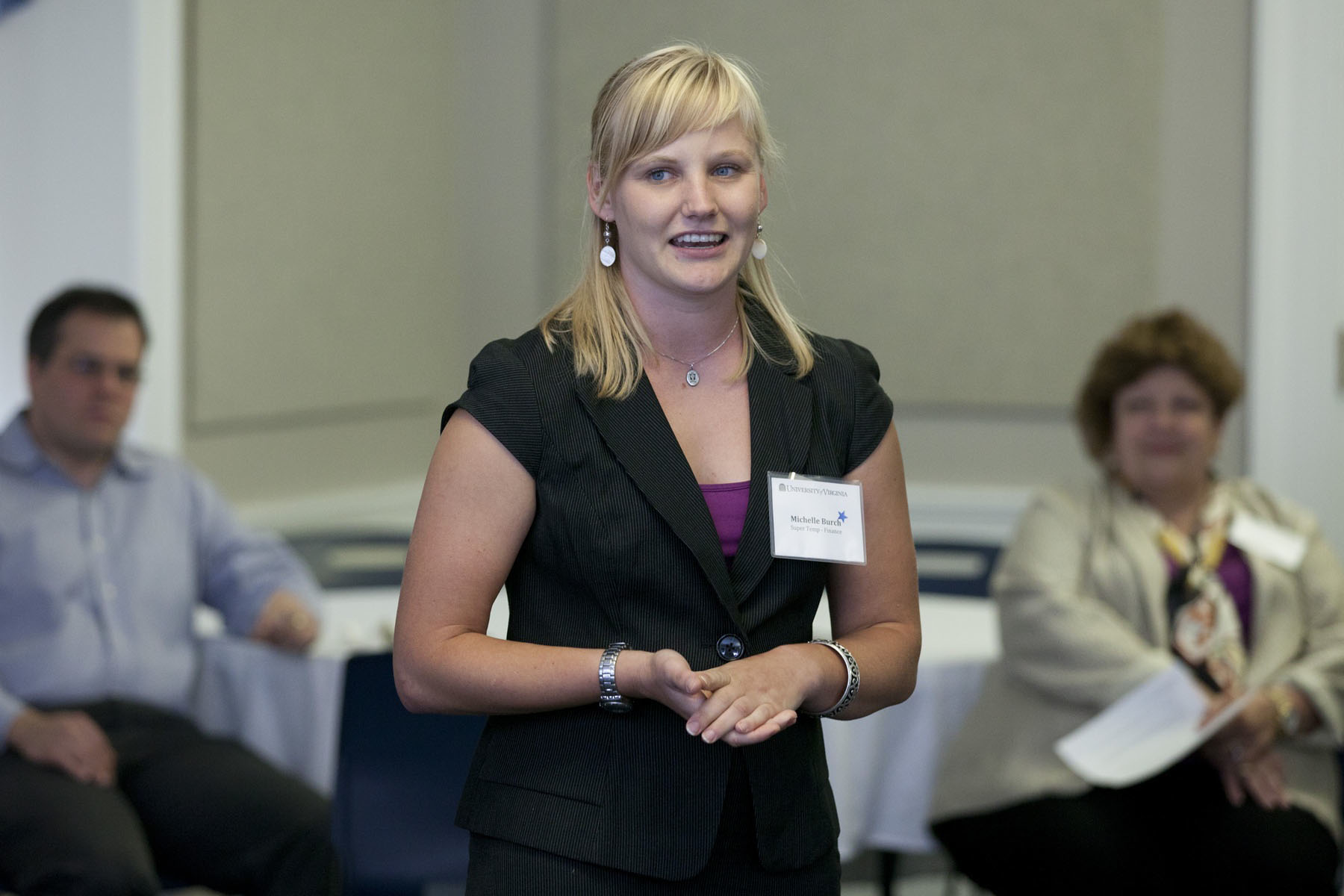 August 11, 2011 — When surprise vacancies occur, when priorities spike or when new projects balloon, who can a 'Hoo turn to?

The answer may be Super Temps, a new cohort of advanced administrative professionals standing at the ready via University of Virginia Temporary Services, or UVa Temps.

A dozen highly skilled and diverse individuals are powering through a two-week boot camp, training in finance and human resources. When done, they will know U.Va.'s main computing systems, from Oracle to the Student Information System. They'll be armed with University IDs, email addresses and i-Keys. They'll not only know what "PTAEO," "I-9," "ODS" and "GM" mean, but also know how to use them.

They got the opportunity to sell themselves at a meet-and-greet reception on Wednesday in Newcomb Hall, where they gave brief introductions and showed their public speaking prowess.

Lisa Brown was born in the U.Va. Hospital and has been a coordinator of breastfeeding support services, while Michelle Burch walked the Lawn in May after earning her B.A. in German and economics from the College of Arts & Sciences. Harold "Chip" Morton and Gay Lynn Tonelli have been pastors; Mark Camblos hopes to apply the communications and organizing he learned in the Marine Corps to a civilian career.

Their range of experiences has equipped them with a high level of professionalism they'll bring to work situations. Janet Turner-Giles, UVa Temps director, wrote in the reception invitation, "Super Temps contribute immediately to departments, filling roles that in the past were too challenging to assign to temporary employees.

"They may not fly, but they will definitely hit the ground running," she wrote.

The Super Temps have been managers and entrepreneurs, organic farmers and high-school coaches, lawyers and ice-cream scoopers. Some have MBAs or master's degrees in other fields. Along with a handful of Charlottesville natives, a few moved to the area to be closer to their grown children. A few have already flexed their fingers in temporary positions on Grounds.

Mary Ellen McLernon worked at the Darden School of Business for 10 years and later as a UVa Temp in several other positions. She left Charlottesville to travel for about three years and came back. Some folks already know her by her nickname, which comes from her email address – "Mer."

She said she wants to be a long-term temporary employee. She especially enjoys moving around in the diversity of situations at U.Va. and being able to exercise her array of skills, she said.

J. Alphonso Taylor is a seasoned business executive who said he wants to put more of his skills to work, including communications, human resources, grants administration and event planning.

"It's not the job title that matters, but the work that I do," said Taylor, who has been a bank manager and an employment specialist.

Migiam Yiu, a recent graduate of Johns Hopkins University and a U.Va. summer intern planning an exhibit at the School of Architecture, grew up working in her parents' ice cream parlor. While at Johns Hopkins, she put her management skills and her economics major to work in several offices and with her service fraternity, Alpha Phi Omega.

"Don't think of us as the cherry on top, but as the cup that holds the ice cream you can have again and again," she told the audience at the reception.

For various reasons, temporary work appealed to these individuals, and they applied for the program, picked for the dozen spots from among more than 100 applicants, said Darrell Kozuch, assistant vice president for human resources.

At Wednesday's reception, he introduced the Super Temps to about 40 attendees and explained the rationale for the program: "Departments had been asking for people who knew the U.Va. systems, especially Oracle, and who wouldn't have to spend two weeks getting up to speed."

Kozuch joked about being worried the cohort would get placed right away – in fact, Human Resources has already hired Yiu, he said – and advised the guests "to get your orders in." By Thursday, Facilities Management had put in a request.

Departments interested in hiring a Super Temp should work with their human resources liaison to submit a request through JOBS@ online. They also can call Turner-Giles at 924-3330, Leslie Hubbard at 924-6862 or Kyle Massey at 982-2831. Specify "HR" or "finance" to receive resumes of individuals who most closely meet departmental needs.

What’s Next for UVA’s Class of 2022? END_OF_DOCUMENT_TOKEN_TO_BE_REPLACED