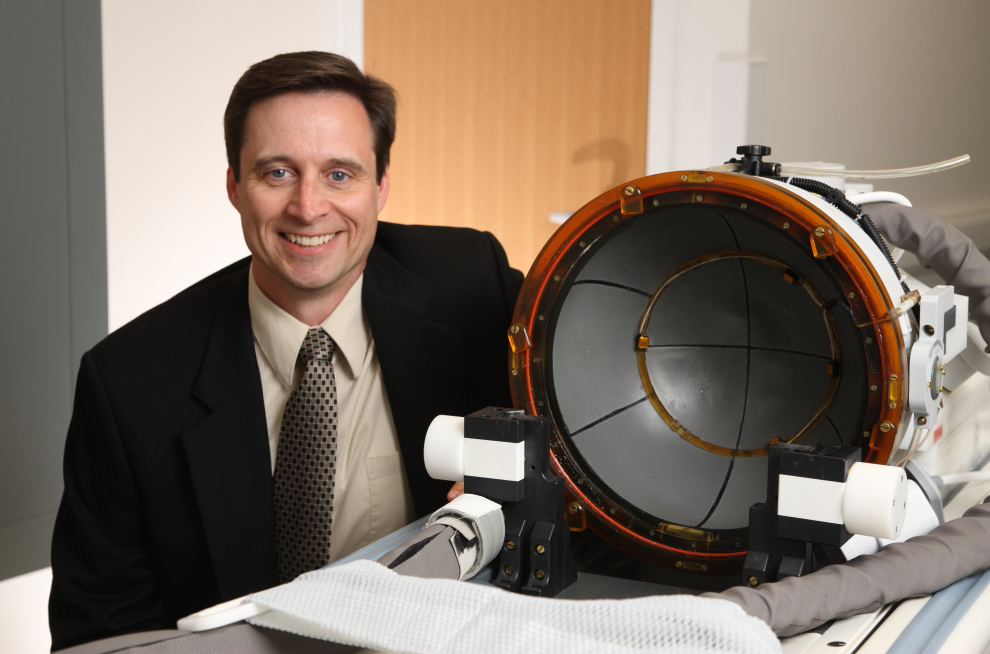 Unfortunately, the most common form of brain cancer, glioblastoma, is also one of the deadliest and most difficult to treat. The statistics are stark: it kills about 95 percent of its victims within five years of diagnosis.

Surgery and radiation have only limited effectiveness because glioblastoma is particularly aggressive, infiltrating brain tissue surrounding the primary tumor. The use of chemotherapy to destroy these tendrils is equally ineffective. The blood-brain barrier – a coating of special cells around capillaries in the brain – keeps all but a handful of necessary nutrients from crossing from the blood to the brain’s extracellular fluid.

There may a solution to this problem. University of Virginia biomedical engineering professor Richard Price and his colleagues at Johns Hopkins University have developed a technique designed to open the blood-brain barrier at targeted locations just far enough to allow the passage of drug-bearing nanoparticles. The National Cancer Institute at the National Institutes of Health awarded the group a five-year, $3.3 million grant to put its ideas to the test.

This technique rests on the careful management of microbubbles, Price’s area of specialty. These soft, dissolvable bubbles of gas were developed as contrast agents for ultrasound imaging. Slightly smaller than red blood cells, they can flow through the smallest capillaries in the body.

Price’s key insight is that at frequencies lower than those used diagnostically, ultrasound causes the microbubbles to oscillate and vibrate in ways that temporarily open small pores in adjacent blood-vessel walls. In other words, microbubbles can be used to breach the blood-brain barrier.

But the blood-brain barrier is only the first obstacle that must be overcome to reach glioblastoma tissue successfully. The second is getting a therapeutic agent to diffuse through the brain once it is on the other side. Brain cells are tightly packed, and brain tissue has an electrical charge that can cause substances that cross the barrier to bind to the nearest surface – the cerebral version of static cling.

In response, Price’s colleagues at Johns Hopkins have developed a nanoparticle that is densely coated with polyethylene glycol, which enables it to diffuse freely through the brain.

“We joined forces with John Hopkins because we each had a technology that addresses one of the two big physical barriers to drug delivery in the brain,” Price said. “We decided to put the two technologies together and see if that combination can actually produce efficacy.”

Having used tracer nanoparticles to fine-tune the system, they are now loading them with different therapeutics. Price is collaborating with researchers at U.Va. who propose using microRNAs and microRNA inhibitors. During the last decade, scientists have demonstrated that microRNA molecules play a large role in aberrant gene expression in cancer.

Price and his colleagues are injecting the microbubbles and nanoparticles at the same time and using MRI to aim the ultrasound beam at the desired target.

“We effectively paint the entire area where the tumor has infiltrated with ultrasound,” Price said.

As Price notes, the applications of this technology are not limited to glioblastoma. “We have the platform,” he said. “You just need to think of the central nervous system condition – it could be Parkinson’s disease, depression or obsessive compulsive disorder – find a therapeutic molecule and deliver it.” The same techniques – perhaps using microbubbles themselves as delivery vehicles and utilizing different ultrasound frequencies – could be used to treat tumors elsewhere in the body.

“The whole idea of creating a platform is exciting,” Price said. “You can measure your success by how widely it is adopted.”

What Is the ‘4th Side’? END_OF_DOCUMENT_TOKEN_TO_BE_REPLACED