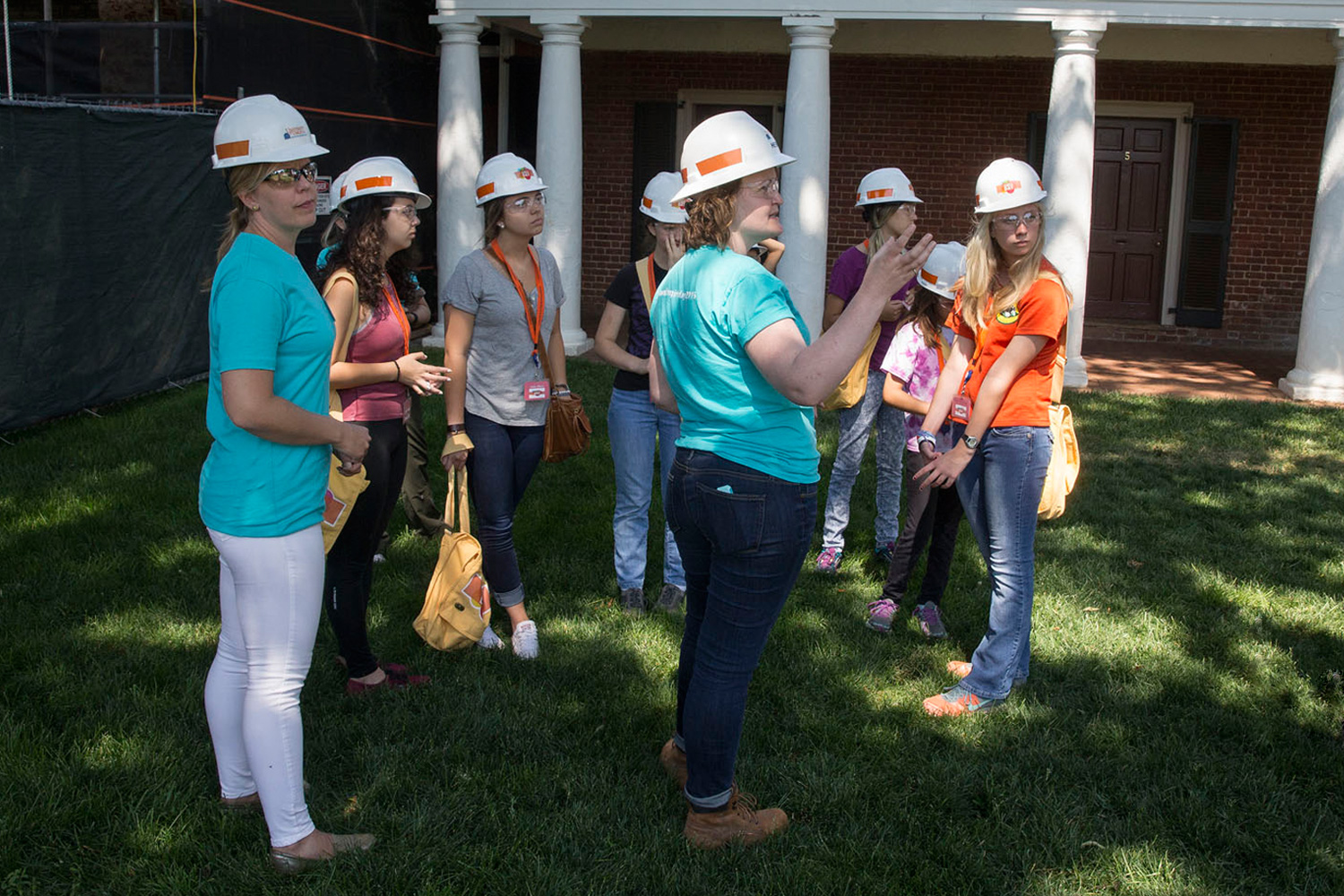 The effort, designed to increase interest and education in construction and the building trades among young women, is modeled after a traditional Take Your Daughter to Work Day program. Facilities Management employees brought about 40 girls to their jobs to participate in various planned activities and show off the work their elders do.

With more than 1,200 employees, Facilities Management is responsible for the day-to-day operation, repair and maintenance of UVA’s buildings, infrastructure and grounds. 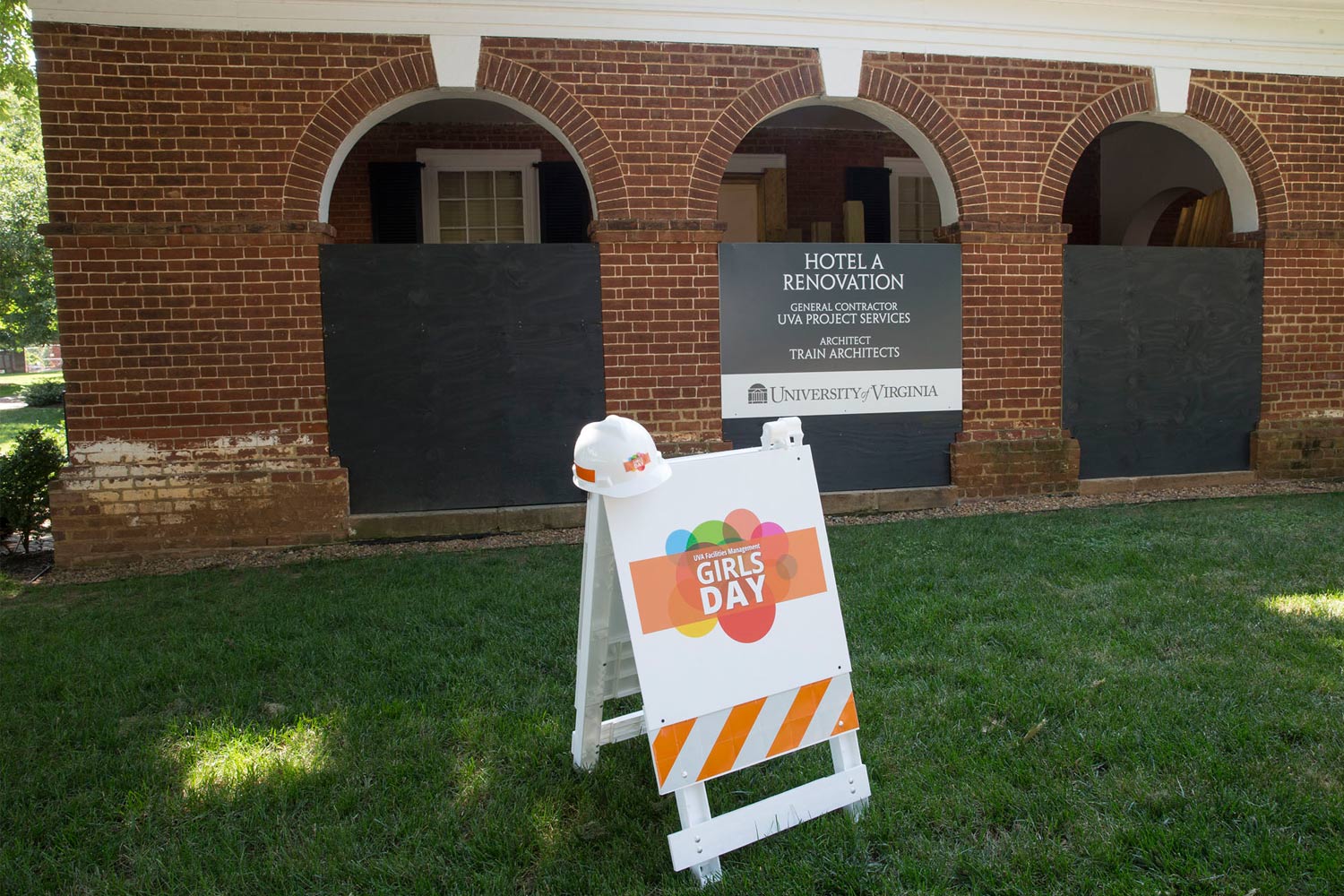 Many of the youth were impressed with the chiller plant at the University’s Medical Center, one of the stops on their tour of the facilities.

“I really liked the chiller plant,” said Sophia Espie, 14, of Charlottesville. “We got to see the big fans and the big pipes and the water. I learned a lot about the chiller plant and how it cools the hospital.”

The visitors were also able to see mock-ups of the Medical Center’s new emergency department, which is under construction now.  “We got to see how they are going to set up the rooms, and doctors get to decide how they want them,” Espie said.

Charlotte Devillier, 12, of Charlottesville, was impressed with the three-dimensional printers at the School of Engineering and Applied Science, and also with the Lawn and the Rotunda, which were stops on the tour.

Jody Lahendro, Charlotte’s stepfather and the supervisory historic preservation architect on the Rotunda renovation project, said he was very impressed that Facilities Management saw a need and proactively reached out to young women.

“There are more and more women in the trades, and I think this is a fantastic way to help bring more young women in,” he said.

Among the women who hold top leadership roles at UVA Facilities Management are Annette Cyphers, director of Facilities Planning & Construction, and Cheryl Gomez, the director of operations. Prominent female leaders are also at the helm of other related departments, including Elaine Gall, the University building official, and Alice Raucher, architect for the University of Virginia, in addition to Colette Sheehy, senior vice president of operations, who oversees the Facilities Management Department.

“This is a way to encourage girls to consider the trades and show them how fun and interesting they are,” Gomez said.

Women also have positions in the construction trades, landscaping and in middle management levels at Facilities Management, which were emphasized during the Girls’ Day.

“This gives young women an opportunity to see all the areas on which Facilities touches,” said Caitlin Murtaugh, a construction project coordinator and the woman who suggested Girls’ Day.

Murtaugh, herself a graduate of Facilities Management’s plumbing apprentice program, said the trades and facilities work can provide women with opportunities for good, hands-on jobs that cannot be exported.

“This can introduce girls to careers in construction that they might not otherwise be exposed to,” Murtaugh said. “We have had a very good response from people in the trades.”

Murtaugh enumerated many advantages for women in the trades. “There is a lot of problem-solving. It is hands-on and the results can be immediate,” she said. “And especially at UVA, you can work in many different places. You can work on historic buildings, in steam tunnels, in housing – there are tons of interesting things you can do.”

Women who spoke about what they love about their jobs and the career paths they have followed led the Girls’ Day tours. In addition, the girls met NASA astronaut Kathryn Thornton, a professor in the Department of Mechanical and Aerospace Engineering, who talked during lunch about her four space flights. She described in detail how it felt to lift off in the space shuttle, the perils of life in near-weightlessness and what it was like to wear a space suit.

“We were just regular people who got really lucky,” she said of her time as an astronaut.

UVA President Teresa A. Sullivan, in a video message to attendees, noted that there is no one set path to success and encouraged them to explore careers that they may not have initially considered. Sullivan recalled being the only female in her high school physics class, but said she found taking that class “opened doors for me that led to more science opportunities – and eventually for my academic career,” she said. “UVA is proud to lead the way in creating environments that encourage the best and brightest women to enter and remain in these critically important fields.”

What Is the ‘4th Side’? END_OF_DOCUMENT_TOKEN_TO_BE_REPLACED