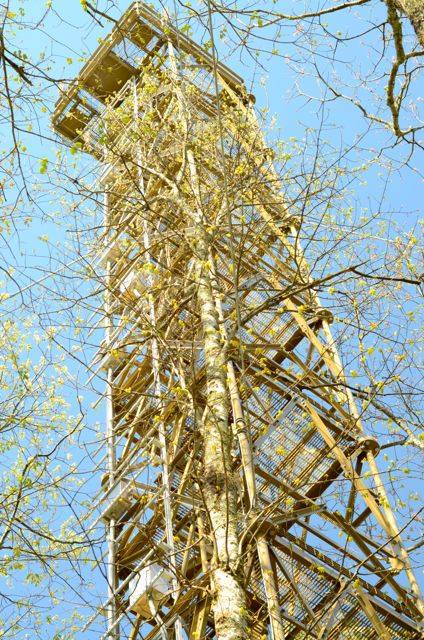 The University of Virginia’s Mountain Lake Biological Station, located on a remote and nearly pristine mountaintop in Southwest Virginia, is about to become a member station of the new National Ecological Observatory Network, or NEON, a conglomeration of 106 United States research stations – from the Arctic to the tropics – to be linked as a single nature observatory.

NEON is a $430 million National Science Foundation project, with a projected annual operating budget of about $70 million.

U.Va.’s site, which includes a new 105-foot tower and the installation of new instruments, will begin collecting and storing ecological data in early 2015 and will do so for at least five years, possibly much longer, as part of NEON’s planned 30-year mission. That data will be managed and distributed by NEON headquarters in Boulder, Colorado and available for analysis and interpretation by scientists at U.Va. and across the nation.

“The idea is to allow thousands of scientists nationwide regular access to a continual stream of data, over the long term, from hundreds of habitats, and to gain broad and specific understanding of the effects of climate change, land use changes and the migrations of native and invasive species – even disease spread,” said Eric Nagy, a U.Va. biologist and associate director of the Mountain Lake Biological Station. He is overseeing establishment of the NEON site there.

“NEON also will help us make more accurate forecasts of changing natural systems, based on the data we collect over lengthy periods of time,” he added.

Once the entire NEON program is fully operational – expected to be in 2017 – it will comprise research stations across the nation, including in Alaska, Hawaii and Puerto Rico. Each site will represent one of 20 different ecological “domains,” such as grasslands, tundra, alpine, tropical and others. Sixty of the sites will be terrestrial and 46 aquatic.

Each station will be automated, collecting a range of data – air and soil temperatures, moisture, air and water chemistry, nutrient cycling and other environmental factors, depending on the type of habitat. The data will be stored, managed and shared, allowing scientists almost anywhere to compare data from one location to another and see what regional and continental-scale environmental trends may be occurring. This also will be combined with ongoing aerial and satellite data of the continent’s surface.

“NEON will provide a real-time image, in effect, of the ecology of the nation, like a telescope pointed at the Earth,” Nagy said. “This is big science, providing standardized data from a range of ecosystems, helping us answer continental-scale questions over time through large-scale collaboration.”

Scientists will gain an understanding of how human activity affects ecosystems and how nature responds over time to rapid and gradual changes, both natural and human-caused.

The installation at the Mountain Lake facility consists of the large atmospheric tower connected to above- and below-ground water and soil monitoring equipment. Regular and broad-scope biodiversity assessments, already routinely conducted, will supplement the new automated-instrument data. Identical measurements collected at all NEON sites will instantly be transmitted and stored and analyzed together, allowing the network to function as a single observatory with multiple components.

“Establishment of a NEON site is an exciting opportunity for U.Va. researchers and students, and for scientists at large who want to better understand the ecology of our southeastern mountains,” Nagy said. “This really is a historical transformation in ecological science. There has never before been a single ecological monitoring system with the broad scope of NEON.”

In Memoriam: Life of Drama Professor To Be Honored Sunday END_OF_DOCUMENT_TOKEN_TO_BE_REPLACED