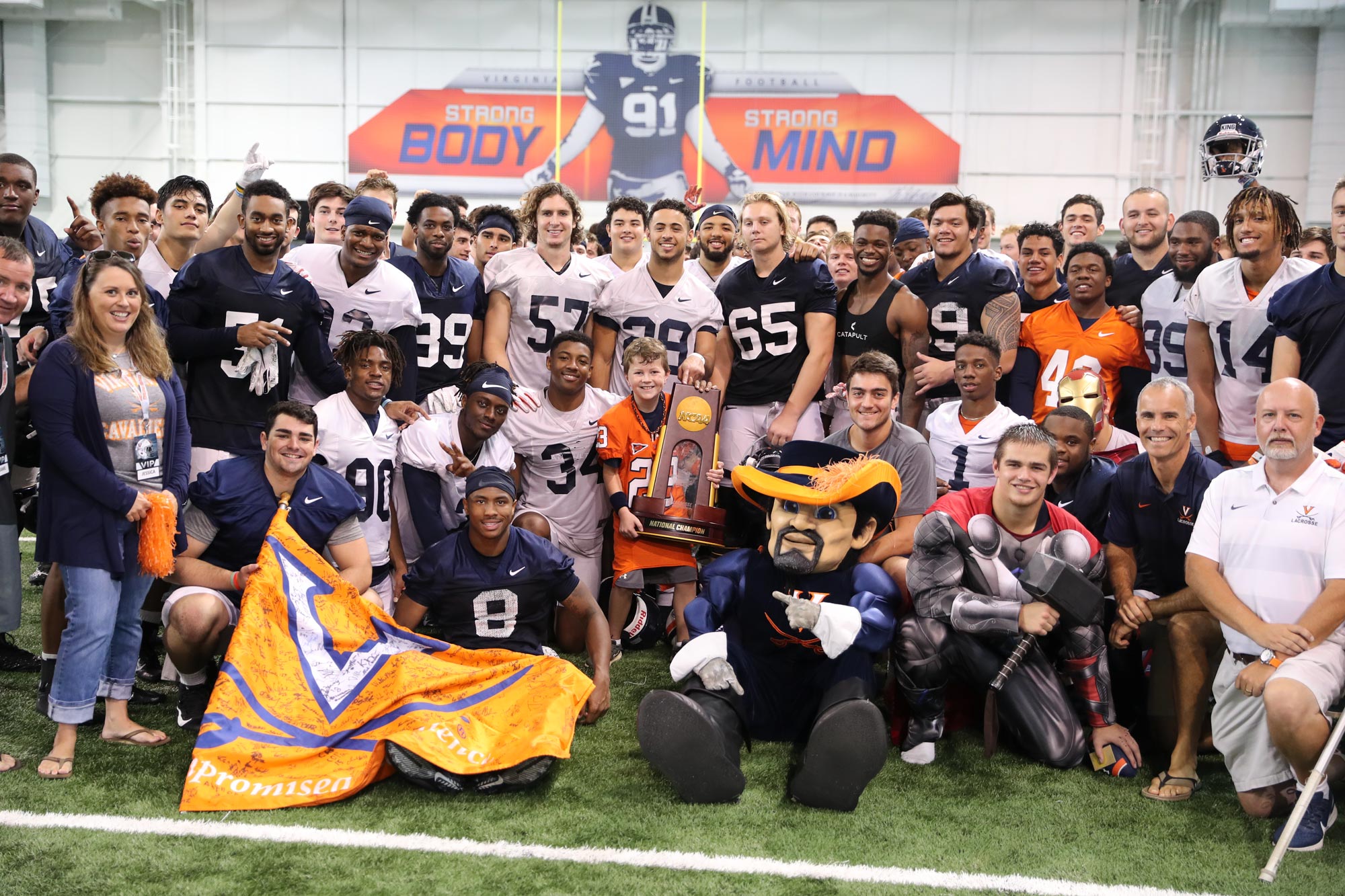 Amid the holiday rush, it was easy to miss the news. Late last month, StreakingTheLawn.com announced the latest recipient of its annual charitable gift: the “Thursday’s Heroes” program that has become an integral part of the University of Virginia football program.

A website devoted to UVA athletics, Streaking the Lawn donates its profits from advertising and affiliate revenue each year to a charity or group that serves the UVA and Charlottesville communities. Previous recipients have included the UVA Children’s Hospital, Special Olympics Virginia, the Boys & Girls Clubs of Central Virginia and Cavaliers Against Cancer.

“We started the website in October 2009, and the first year we didn’t make any money, so there was nothing to give, unfortunately,” said Brian Leung, Streaking the Lawn’s founder and managing editor. “But starting in 2010, we’ve been giving it every single year, though obviously a much smaller amount for the first couple years.”

When head football coach Bronco Mendenhall came to UVA in December 2015, he brought the Thursday’s Heroes program with him. He and his wife, Holly, had started it at Brigham Young University, where Mendenhall spent 11 seasons as head coach before taking the UVA job.

“I love for football to not just be a game, but to really make a difference,” Mendenhall said. “Our Thursday’s Hero program is doing that.” 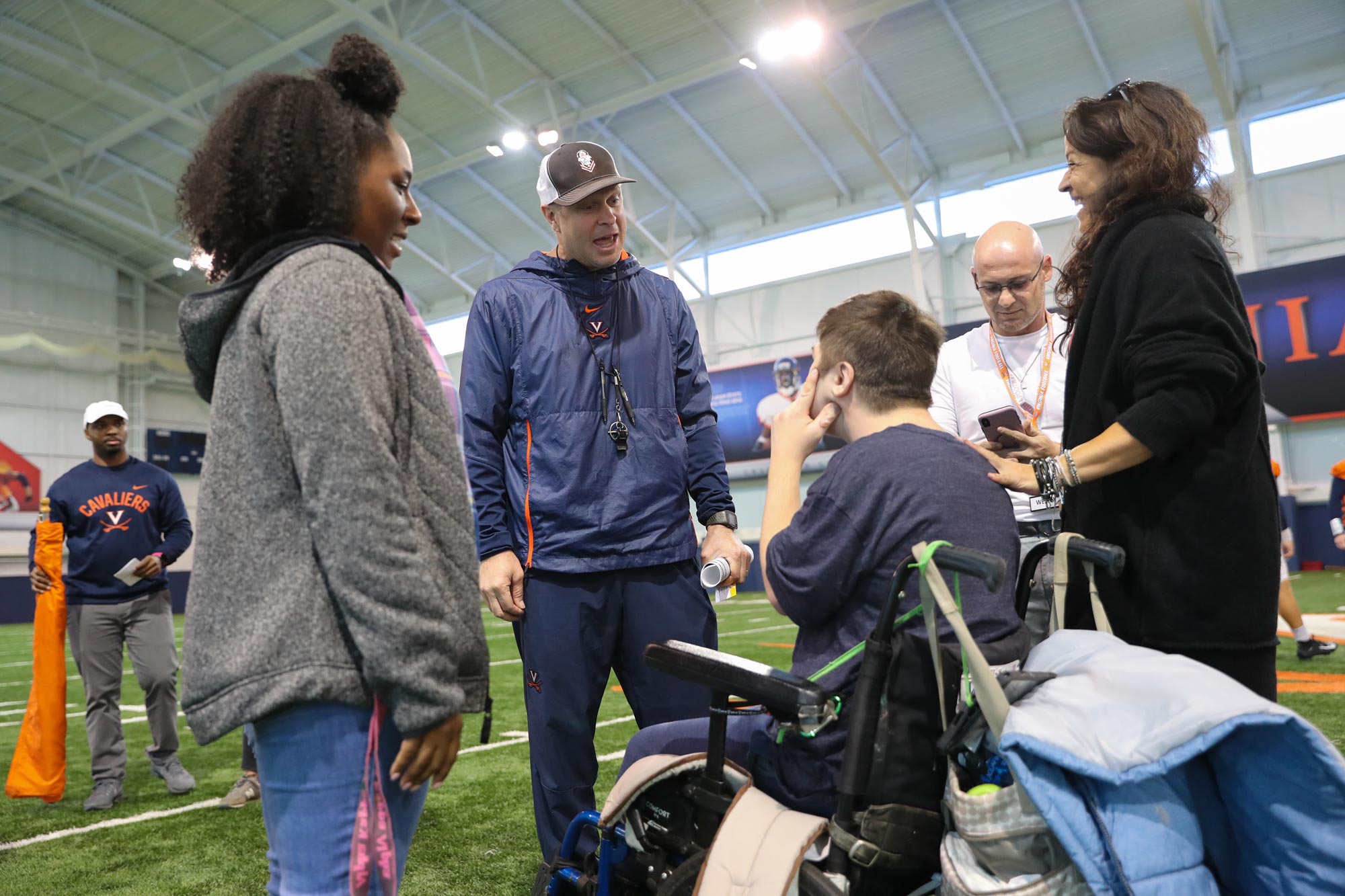 Each week during spring practice and during the season, Mendenhall’s players welcome into the UVA football family a local resident who’s facing medical challenges. These Thursday’s Heroes and their families tour the football complex, including the McCue Center and the George Welsh Indoor Practice Facility, and meet the team.

During a post-practice celebration that often includes surprise guests, the Thursday’s Hero receives gifts from the players and signs the flag that the Cavaliers carry onto the field with them before every game.

“What we liked about Thursday’s Heroes was that it’s more than just a charitable act,” Leung said. “You could see the reactions, not just from the players, but more interestingly, from the fan base, where it actually looks forward to the Thursday’s Heroes video getting released [each week on social media].

“Particularly over the course of this past year, but the last couple seasons, this became as much a part of game week as the game itself. As we got closer to the end of the week, people were like, ‘Oh, boy, I can’t wait to see the Thursday’s Heroes video come up.’ That was really attractive to us.

“For whatever reason, we’ve generally been attracted to giving to charities that interact a lot with kids. It sort of pulls at our heartstrings.”

The gift, which Leung said was a five-figure donation, will help the football program pay for the gifts it distributes to the Thursday’s Heroes. Mendenhall could not be more appreciative.

“I was just touched and overwhelmed and thankful that friends of the program would acknowledge our efforts to serve others through the game of football and to help our community and individuals within the community have a better life experience or a brighter day,” he said. “That Streaking the Lawn would acknowledge that, and then want to partner and help make a difference in others’ lives through the game of football, it forms a special partnership. And so I’m thankful, grateful and humbled by it.”

Leung, who’s based in Washington, D.C., has two degrees from the University. He earned his bachelor’s in government in 2005 and graduated from the School of Law in 2008.

“After law school I went up to New York to practice there,” Leung recalled. “I felt a little disconnected from UVA, and so I started this dumb blog, for lack of a better term, as a way to connect with fellow UVA fans out there, and I had no idea that it would eventually grow to this.

“About a year in, SB Nation reached out to me and said, ‘Hey, we’re building out our college network. Would you be interested in joining?’ And so it just sort of snowballed from there.” 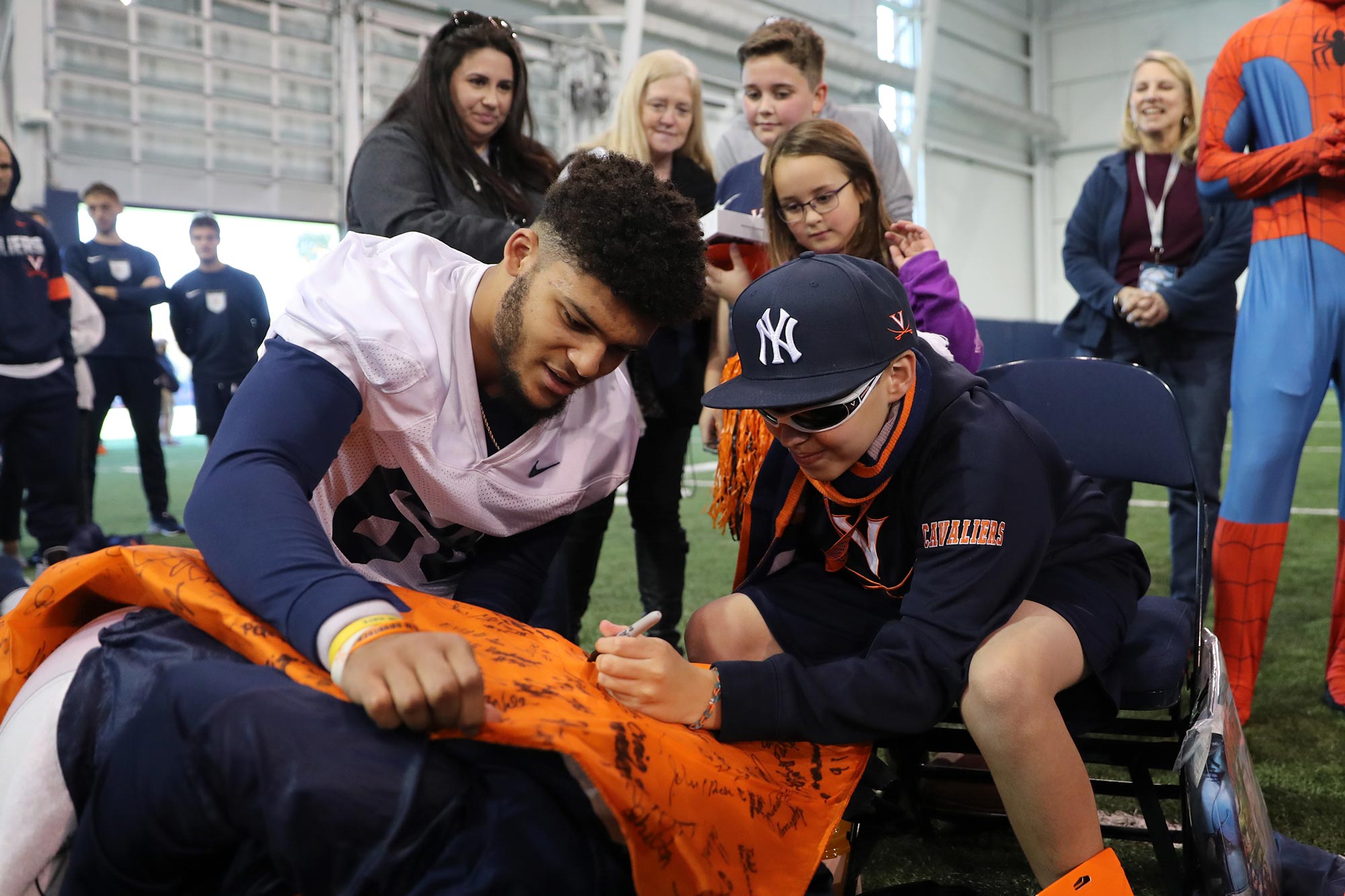 “I would say [the past two seasons] have been a little bit of turning point for the fan base,” said Leung, who’s now vice president and associate general counsel for Vox Media. “Having the team make it to the Orange Bowl has been incredible, and I think it’s going to translate really well into attendance next season. There was already a change in attendance this year. You could see a noticeable uptick in getting butts into seats.

“I’m reminded of when I was a first-year as an undergrad. In the student section [at Scott Stadium], we stood in the stands, and we had to turn sideways in order to get everybody to fit into there. Over the course of the past 15 years, that’s certainly declined to where there’s a lot more space. But there’s starting to be a buzz in the stadium again.”

At the heart of Mendenhall’s coaching philosophy is the concept of “AND”: his belief that players can and should distinguish themselves in football and other endeavors simultaneously.

“It’s important to me that they’re more than football players,” Mendenhall said, and the Thursday’s Heroes program, in which the whole team participates, is one way for the Hoos to do so.

Leung said UVA fans have come to understand that Mendenhall’s approach differs from that of many college coaches. The same is true for Tony Bennett’s philosophy in basketball.

“I think they’ve definitely picked up on that, and I think it’s grown on them,” Leung said. “In the first couple years of Bronco’s tenure, it was, ‘Man, this guy does a lot of idiosyncratic things,’ and that’s probably an understatement to use those terms.

“But a few years in now, they’re seeing some of those idiosyncrasies translate into a different on-the-field product. I think the fan base has appreciated that. It took some time, and obviously the success that we’ve seen on the field over the last couple of years has been helpful in convincing the fan base that these idiosyncrasies have meaning.

“When Thursday’s Heroes first came out, there was some reaction where people said, ‘Hey, this is really cool, but Thursday is awful close to game day, and is the team getting distracted on Thursdays?’ That’s probably not fair to think, but now that it’s a winning program on the verge of a 10-win season, hopefully soon, fans like it.”

A Year We Will Never Forget: 2019-20 in Review END_OF_DOCUMENT_TOKEN_TO_BE_REPLACED

‘What Will You Carry With You?’ Remarks From UVA President Jim Ryan END_OF_DOCUMENT_TOKEN_TO_BE_REPLACED