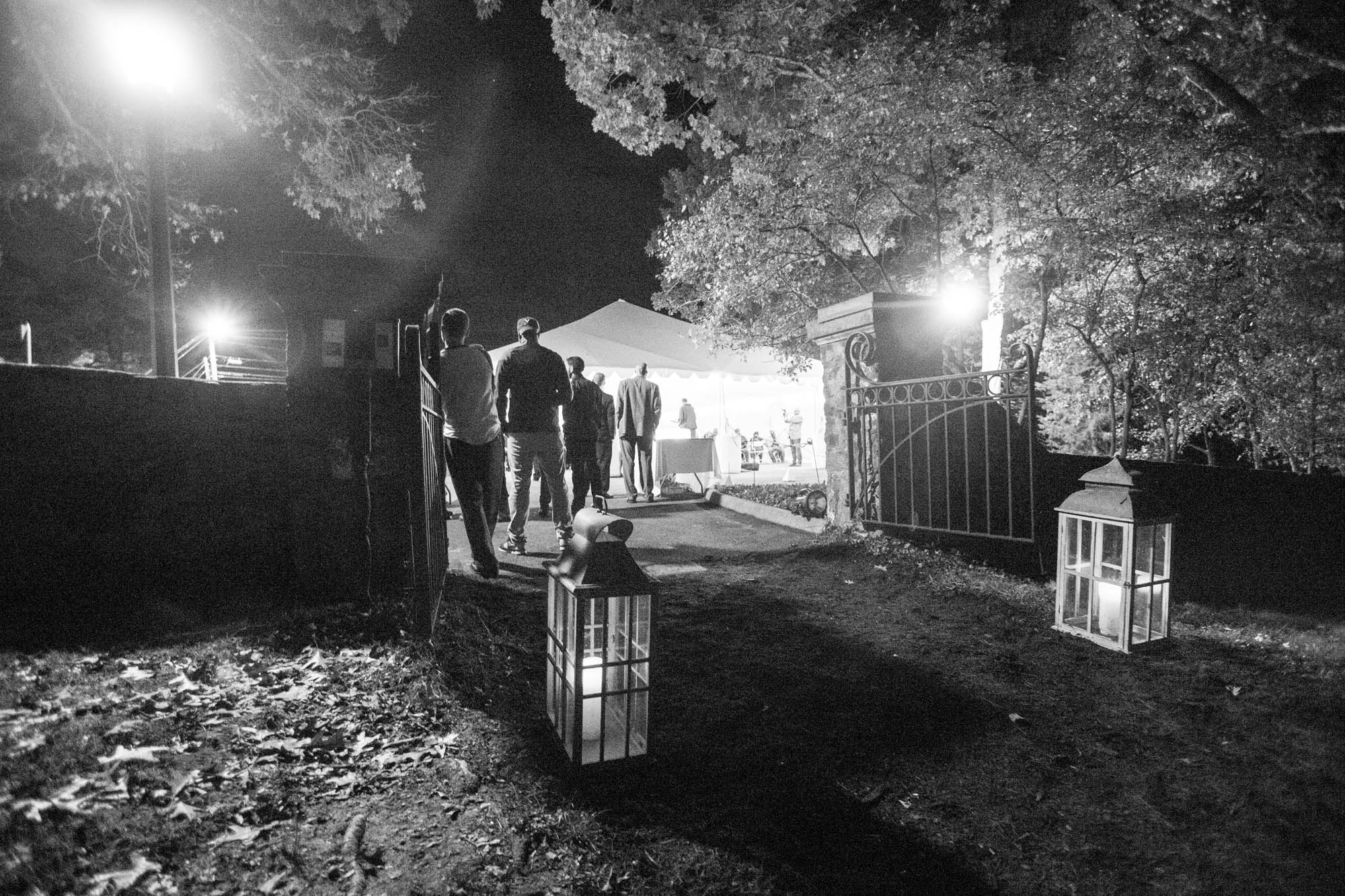 Student ushers wait just outside the cemetery gates to guide the attendees through the path towards the cemetery.

A crowd of about 150 people held Mason jars lit with tea candles Thursday night, illuminating the path as they walked through the University of Virginia Cemetery for a commemoration at the adjacent African-American burial site. Students with flashlights and lanterns also lined the path for the people who followed Rev. Almeta Ingram-Miller and a choir singing the gospel song, “Walk Together Children, Don’t You Get Weary.”

U.Va.’s Commission on Slavery and the University held the ceremony as part of its national symposium, “Universities Confronting the Legacy of Slavery,” which took place Thursday and Friday. The conference brought together experts from U.Va., the local community and representatives from Brown University, Emory University, the College of William & Mary and the University of Alabama to discuss issues surrounding the recognition of slave history at these institutions.

The burial site, located just north of the walls of the University Cemetery, was discovered two years ago during an archaeological survey in advanced of a planned expansion of the cemetery. Archaeologists discovered 67 mostly unmarked grave shafts, which they said likely contained the remains of enslaved and possibly post-Emancipation African-Americans.

The graves were left undisturbed.

“This is a beautiful gathering of the community and the University,” said commission co-chair Dr. Marcus L. Martin, U.Va.’s vice president and chief officer for diversity and equity.

After opening remarks from Martin and commission member Gertrude Fraser, a U.Va. associate professor of anthropology, the Rev. Alvin Edwards, pastor at Mt. Zion First African Baptist Church, used the lyrics of James Weldon Johnson’s “Lift Every Voice and Sing” to talk about the 67 unnamed souls whose graves were discovered at the burial site in fall 2012.

Stony the road we trod ...” Edwards recited, saying the stones on the path had turned to stairs because of the sacrifice and work of “the ancestors buried here.”

Deborah McDowell, director of the Carter G. Woodson Institute for African-American and African Studies and an English professor, dwelled on who the unknown people might be in reading a poem by Brenda Marie Osbey, an award-winning writer and visiting professor at Brown University. Osbey wrote the poem especially for the occasion but couldn’t attend to read it herself, due to a prior engagement in France.

The poem ended with: “No one of us can make a home where ancestors do not live.”

The symposium on Friday also presented three panels on how universities have dealt with the legacy of slavery, what is known so far about slaves at U.Va. and the possibilities for memorializing slavery.

Lunch that day was held on the Lawn near Old Cabell Hall under a sunny sky, with University of North Carolina law professor Alfred L. Brophy giving the keynote address. He told stories about several of U.Va.’s heretofore-illustrious ancestors – except for their proslavery views and secession arguments – including Joseph Carrington Cabell, who helped Thomas Jefferson found the University, and James P. Holcombe, one of U.Va.’s earliest law professors.

Brophy also researched 19th-century student essays, theses and articles in magazines, where “slavery hung over their discussions,” he said.

In introducing Brophy, U.Va. associate history professor Kirt von Daacke, who co-chairs the commission with Martin, said, “The functioning of the University cannot be understood without acknowledging the work of slaves.”

Speaking at another symposium event, a memorial service held on Thursday at First Baptist Church, Sullivan said, “The creation of this commission is an important step as we prepare for the University’s bicentennial, which we will begin to celebrate in 2017 – the 200-year anniversary of the laying of the University’s cornerstone.

“If we want the bicentennial commemoration to tell the true and complete story of U.Va.’s past 200 years – and we do – it must include appropriate recognition of the historical role of slavery and enslaved persons at the University,” said Sullivan, who appointed the Commission on Slavery and the University in September 2013.

The commission’s charge includes exploring U.Va.’s history with slavery and highlighting opportunities for recognition and commemoration.

Both day’s events began with a short documentary film, “Unearthed and Understood: Slavery at the University of Virginia,” produced by Eduardo Montes-Bradley, in which Sullivan, members of the commission and its local advisory board, as well as other U.Va. faculty, talked about the need for the commission’s work.

Regarding that work, Martin said at the end of the film and reiterated at the symposium, “This is just the beginning.”

At UVA, There Is a Club for Everyone END_OF_DOCUMENT_TOKEN_TO_BE_REPLACED