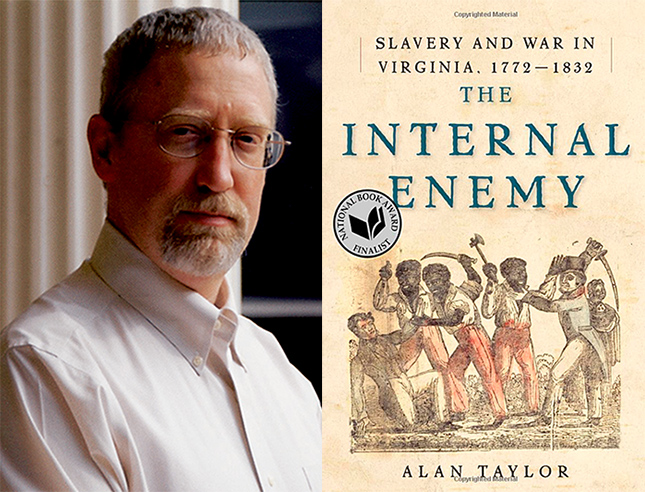 University of Virginia historian Alan Taylor, one of the nation’s premier experts in Colonial America and the early U.S. republic, has received a Pulitzer Prize for his book, “The Internal Enemy: Slavery and War in Virginia, 1772-1832.”

The Pulitzer committee’s citation calls the book “a meticulous and insightful account of why runaway slaves in the colonial era were drawn to the British side as potential liberators.”

Taylor, who arrived at U.Va. in March and will begin teaching in August as the Thomas Jefferson Memorial Foundation Chair in the Corcoran Department of History in the College of Arts & Sciences, said he was “astonished” at the news.

“I realized it when my email went crazy,” Taylor said. “It is nice when you get congratulations from so many friends. It is wonderful to see how happy others are at my good fortune.”

U.Va. President Teresa A. Sullivan congratulated Taylor on the award. “This prize is yet another recognition of Alan Taylor’s remarkable research and scholarship and his unique perspective on early American history,” she said. “We are delighted that he has joined our faculty, and that he will continue his distinguished career at U.Va.”

This is not the first time Taylor has won the prize. He received his first Pulitzer in 1996 for his book, “William Cooper’s Town: Power and Persuasion on the Frontier of the Early Republic.” He also received a Bancroft Prize for that book.

“I didn’t expect my first Pulitzer and I certainly did not expect this,” said Taylor, who received the news in Philadelphia, where he was preparing a talk for a group of historians.

“This is huge,” said Paul Halliday, who chairs U.Va.’s history department. “We have a lot of terrific, prize-winning historians in this department, but to win a second Pulitzer is remarkable.”

“It’s fantastic,” said Andrew Jackson O’Shaughnessy, a professor in the Corcoran Department of History and Saunders Director of the Robert H. Smith International Center for Jefferson Studies at Monticello. “This is thrilling for the department.”

Halliday noted that Taylor’s book was still in contention for the Washington Book Prize – as is O’Shaughnessy’s book, “The Men Who Lost America: British Leadership, the American Revolution and the Fate of the Empire” – and had been short-listed for the National Book Award, along with many other accolades.

“This is only one of the many prominent recognitions it will receive,” Halliday said. “This is an important but little-known story, but one that is very important to us in Virginia.”

“The Internal Enemy” tells the story of about 3,000 enslaved Africans from the Chesapeake region who escaped slavery by fleeing to the British and helping them to wage war on the United States during the War of 1812, said Taylor, who taught at the University of California, Davis for about 20 years before joining U.Va.’s faculty. “The book sets that story in the context of the shifting nature of slavery after the American Revolution,” he said.

In 2012, Taylor served as a fellow in residence at Monticello’s Smith International Center for Jefferson Studies. He used the resources of the Jefferson Library to finish his manuscript for “The Internal Enemy.”

“It was an extraordinary set of human dramas, the resourcefulness of people who were seeking freedom, stealing boats in the middle of the night to go out and find British warships and offer their services,” Taylor said.

Taylor said he was drawn to the story in part because so little seemed known about it. He stumbled upon it while he was researching something else and was surprised that he had never heard these stories.

“This was supposed to be my area,” he said. “Most people never heard about it. A lot knew about the earlier slave escapes during the American Revolution, but these events were much better documented.”

Taylor thinks in part these episodes were overlooked by historians because they took place during the War of 1812, a forgotten and ignored war. This is Taylor’s second book about the War of 1812 and he hopes that the Pulitzer Prize will bring his book to the attention of more readers than would ordinarily read a history book.

“Alan Taylor has always been interested in public history and writing for the layman, not just the scholar,” O’Shaughnessy said. “He has succeeded in making an important methodological breakthrough in the discipline with his ability to integrate modern social history – the lives of ordinary people – into the grand narrative of political, military and economic history.”

Taylor is highly regarded as a historian who has reshaped how fellow historians and the general public look at the topic. Halliday described him as a pioneer in “microhistory,” which examines particular episodes, places or small groups of people so that broader meanings become apparent. Halliday said Taylor has also broken ground in conceiving early American history as part of a global story, especially around the Atlantic Ocean.

“It is a story about forces and actors at work all around the Atlantic,” Halliday said, “such as the competition of multiple European empires in, for and around North America; the commerce in human lives brought forcibly from the west of Africa; contacts among multiple cultures as they traded, conducted political negotiations, intermarried and so on. Truly great writing about the American past, like Alan’s, reveals just how deeply embedded we are and always have been in the world around us.”

Aside from this current work, Taylor is also the author of  “Liberty Men and Great Proprietors: The Revolutionary Settlement on the Maine Frontier,” “The Divided Ground: Indians, Settlers and the Northern Borderland of the American Revolution,” “American Colonies: The Settling of North America” and “The Civil War of 1812.”

Taylor is the fourth Thomas Jefferson Memorial Foundation Professor in History since 1958 when the endowed chair was created. The first holder of the chair was Pulitzer Prize winner Dumas Malone, best known for “Jefferson and His Time,” his six-volume biography of Thomas Jefferson. He was followed by notable Jefferson scholars Merrill Daniel Peterson and, most recently, Peter S. Onuf, who retired in 2012.

Do You Know the History of Your Favorite Corner Spots? END_OF_DOCUMENT_TOKEN_TO_BE_REPLACED

Netflix to Add Ads. Why This Could Be a ‘Game-Changer’ for Your Viewing Experience END_OF_DOCUMENT_TOKEN_TO_BE_REPLACED

What’s Next for UVA’s Class of 2022? END_OF_DOCUMENT_TOKEN_TO_BE_REPLACED