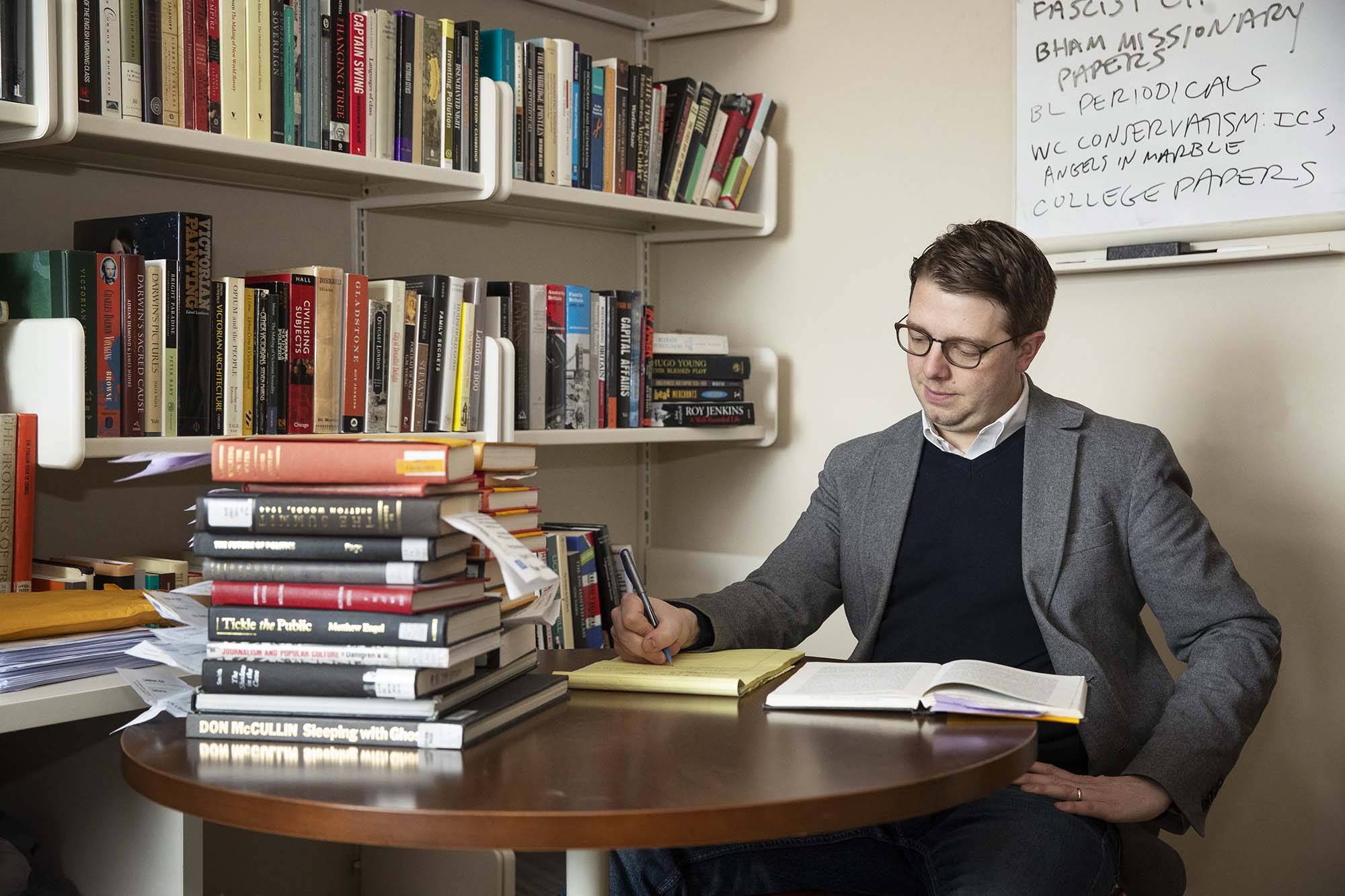 University of Virginia historian Erik Linstrum will travel to Germany to write about colonial violence at the end of the British Empire, backed by a fellowship from the American Academy in Berlin.

The Berlin Prize is awarded annually to United States-based scholars, writers, composers and artists in a variety of fields, from the humanities and social sciences to journalism, fiction, visual arts and music composition. Fellows receive a monthly stipend, partial board and accommodations at the American Academy’s lakeside Hans Arnhold Center, a 19th-century villa in Berlin’s Wannsee district.

During their stay, fellows present public lectures, readings and performances, which form the core of the American Academy in Berlin’s public program. Linstrum will be one of 11 scholars at the academy in the spring 2021 term.

“It is a tremendous honor and I am grateful for it,” Linstrum said. “It is a nice bit of recognition and it shows, I hope, that this project will be of interest beyond the field of British history.”

In his work, Linstrum, a historian of modern Britain in its imperial and global contexts, explores the politics of knowledge and the circulation of information. He is author of “Ruling Minds: Psychology in the British Empire,” for which he received the American Historical Association’s 2017 George Louis Beer Prize for the best book of the year in European international history.

Linstrum has held fellowships with the Library of Congress, the Society of Fellows at the University of Michigan, the Kennedy School of Government at Harvard and the Institute of Historical Research in London. He currently serves as North American editor of the journal Twentieth-Century British History.

“The academy is on a beautiful spot outside the city on the west side of Berlin,” Linstrum said. “It is rather idyllic on the lake and should be congenial for writing. But then Berlin itself is distracting in all kinds of ways.”

In his new book, Linstrum, an associate professor in the Corcoran Department of History, is examining the home-front attitudes and reactions to the violence and brutality during the various small wars and police actions in which the British were involved after World War II.

“The wars of decolonization in the 1950s, in places such as Kenya, Malaya and Cyprus, were brutal conflicts that involved the use of torture, detention camps, forced population movements, aerial bombing and collective punishments, among other things,” Linstrum said. “These were counter-insurgencies which blurred the boundary between civilians and combatants – not unlike conflicts in our own time in Afghanistan and Iraq. My project is focused on the question of what people in Britain knew about the violence at the time and how they responded to it. How did justify it and how did they live with it?”

Linstrum said the British people, through the informational networks which connected them to empire, were aware of the violence.

“Despite what has long been thought and is often assumed even today, knowledge of torture and other abuses was quite widespread,” Linstrum said. “This was not a secret. People in Britain knew about this; they talked about it, soldiers wrote letters home, journalists wrote about it in some detail, missionaries wrote about it, and it was the subjects of novels and plays and television films. So part of what I am doing is just to chronicle the extent of that knowledge.

“And the related question is, if so much was known about torture and brutality, why didn’t people do more about it? Why weren’t they more upset by it? And, of course, that is a very complicated question. But I think one answer is that the same mechanisms that made it possible for people to know about violence also diminished the sense of urgency to respond to it.”

Linstrum said that for Britain, the standard “postwar” label for the post-1945 period is misleading. Uprisings and insurgencies in the colonies – beginning in Palestine in 1946, Malaya in 1948, Kenya in 1952, and Cyprus in 1955 – lasted for years.

“These conflicts overlapped and there was a sense of perpetual warfare, although they weren’t called ‘wars’; they were called ‘states of emergency’ or ‘police actions’ instead,” he said. “This was also a period in which, for the first time in British history other than the two world wars, you have mass conscription into the armed forces. The British state made military service obligatory for young men, and this went on until 1960 largely because of this attempt to keep the empire by force.”

Linstrum has researched his book in archives from Fleet Street to the Church of England to the British Red Cross, from BBC teleplays to West End theater records. The fellowship will give him an opportunity to pull together the research and write the book, which has a working title of “Age of Emergency: Living With Violence at the End of Empire.”

“I really need to write and reflect,” Linstrum said. “And what is helpful about Berlin is that part of my ambition here is to challenge long-reigning ideas about British exceptionalism, about British history being something apart from and distinct from continental European history. I think one of the lessons of the work I am doing now – and also one of the lessons of Brexit, ironically – is that British history is not as different from European history as we might assume. Things like far-right extremism and political violence are significant parts of British history, but have often been left out of the story. I want to bring those questions into British history in a way that they haven’t been.”

The Berlin Fellowship will help him by being a new experience.

“It is good in general for historians to get a change in perspective, to work in other languages, work in other libraries,” Linstrum said. “I’m particularly excited by the emergence of the history of knowledge as a new field. Questions about how institutions create knowledge, how information circulates, are really important to my project, and German-language scholarship has led the way in that.”

Claudrena Harold, chair of the history department, lauded Linstrum and his accomplishments.

“It is wonderful to see such a remarkable scholar and generous colleague awarded such a highly coveted prize,” she said. “A prize-winning historian of modern Britain, Erik is at the forefront of advancing knowledge in the critical areas of science and technology, war and violence, and empire and decolonization. Combined with being a first-rate scholar, he is a wonderful teacher who has enriched the intellectual experiences of our undergraduates. Erik’s innovative scholarship and teaching reflects our department’s deep commitment to shaping and enhancing humanistic inquiry at the University and in the larger world.”

Linstrum feels Berlin will be a good environment in which to write because of the German perspective on history.

“German history is particularly useful here, because of a long tradition of thinking about knowledge about violence in context of the Holocaust,” Linstrum said. “The violence we are talking about here is not analogous to the Holocaust, but the kinds of questions that can be asked about it – ‘What did people know?’ and ‘How did they know?’ and ‘Why didn’t they do more to stop it?’ – those kinds of questions are very relevant. There is a German scholarly tradition of thinking about everyday life in the Third Reich that is particularly useful to me.”

The American Academy in Berlin was established in 1994 by U.S. Ambassador to Germany Richard C. Holbrooke and other Americans and Germans to foster greater understanding and dialogue between the U.S. and Germany. A private, nonprofit, nonpartisan center for research in academic and cultural fields, the academy awards semester-long fellowships to around 20 emerging or established scholars, writers and professionals each year. It also brings influential American figures to Berlin for briefer visits for an exchange of views between the peoples of Germany and the U.S.

It’s Copperhead Season in Virginia. Here Is What You Need to Know END_OF_DOCUMENT_TOKEN_TO_BE_REPLACED

What’s Next for UVA’s Class of 2022? END_OF_DOCUMENT_TOKEN_TO_BE_REPLACED