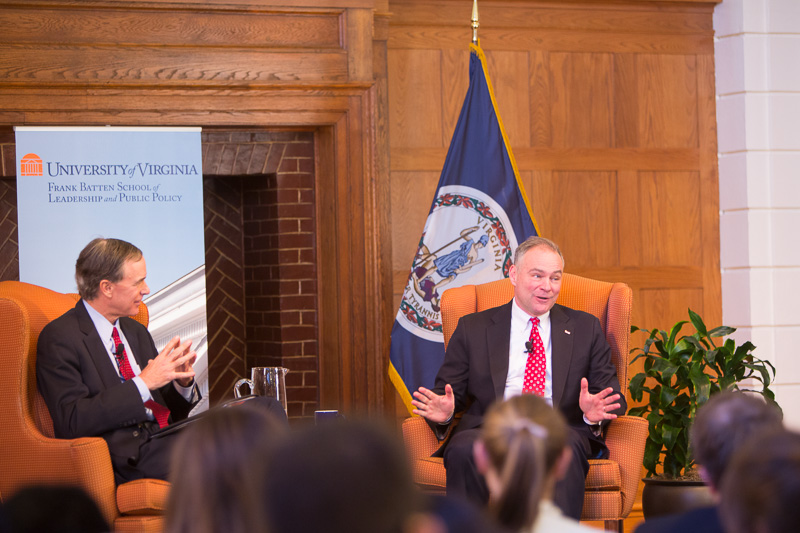 The framers of the Constitution envisioned that Congress, with the power of the purse, would initiate war, and the president would prosecute the military action once hostilities were under way. But it has rarely worked that way.

That’s why U.S. Sens. Tim Kaine (D-Va.) and John McCain (R-Ariz.) introduced legislation Jan. 16 that would reform how Congress and the president consult on whether and when to engage in military action, Kaine explained Wednesday at the University of Virginia’s Frank Batten School of Leadership and Public Policy. His address drew a capacity crowd of roughly 150 students in Garrett Hall’s Great Hall.

Most of the audience comprised undergraduate students in the “Public Policy Challenges of the 21st Century” course taught by Batten School professor Gerry Warburg, who introduced the senator.

“Part of the design of the Batten School is to have students interact directly with leading national policymakers like Sen. Kaine,” Warburg noted.

The War Powers Consultation Act of 2014, Kaine said, is based on the 2008 recommendations of the U.Va. Miller Center’s National War Powers Commission, a group co-chaired by former Secretaries of State James Baker and Warren Christopher. It would repeal and replace the 1973 War Powers Resolution, which was passed at the end of the Vietnam War and has been ignored by every president and Congress since.

At less than five pages long, this “fairly straightforward piece of legislation” would codify a consultative process between Congress and the president, Kaine said. Under the act, the president must consult with Congress before ordering deployment into a “significant armed conflict” – defined as combat operations lasting, or expected to last, more than seven days.

This would exclude humanitarian missions and covert operations, which are covered by other laws, Kaine said in response to one of many student questions from the audience. If secrecy or other emergent circumstances preclude consultation before military action, consultation may be deferred but must be undertaken within three days.

The new legislation would create a permanent Joint Congressional Consultation Committee in Congress that would consist of majority and ranking members of the House and Senate national security committees (Armed Services, Foreign Relations, Intelligence and Appropriations) and the leader and ranking member in each House of Congress to ensure there is a timely exchange of views between the legislative and executive branches, not just notification by the executive. Committee members would have access to regular information on the process and the substance of national security matters and would meet with the president periodically.

While it’s easy to imagine why a president might prefer to take military action without seeking any approval, Congress also generally likes to avoid voting on controversial actions, and would often prefer to “wait and see” how military action turns out on the ground, Kaine said, before condemning or supporting the action.

This allows ambiguity and sloppiness around military action, which causes two major problems, he said. First, going to war is “the most important decision we make as a government,” and the public needs to develop an informed opinion on the matter by watching a thorough public debate. Second, forcing Congress and the president to reach a consensus accomplishes what Kaine called an “underlying value of utmost importance”: “We shouldn’t ask men and women to risk their lives if there isn’t political consensus to say we should risk those lives.”

Members of both parties and both branches of government have been culpable in this sloppiness in the past, Kaine said.

That’s why the new act requires all members of Congress to take a vote of support or opposition for any significant military action within 30 days, Kaine said.

The time is ripe for this reform after 13 years of open-ended war that some military leaders have told Congress could continue for another 25 to 30 years, all based on a Sept. 18, 2001 Congressional authorization of military force against those responsible for the 9/11 terrorist attacks “and their affiliates” – language that has been broadly construed since then – with no end date or geographic limitations.

Kaine said, “I know this for certain: not one member of Congress who voted in 2001 for the authorization of the use of military force thought they were voting for a 40-year, open-ended war.”

The “sloppiness” of the 2001 military force authorization “has had huge costs in American lives, in the lives of others, in budgetary red ink, and in relations with nations all around the world,” he said.

Reform is also timely, Kaine said in answer to another student question, because questions of military engagement are now coming up with greater frequency and in more challenging contexts, including possible military action against terrorists and nonstate threats, multi-state actors, and through action involving new technologies like drones and cyber warfare.

In addition to the evolving nature of war, the connection of policymakers to the realities of war has changed dramatically in the last generation, Kaine noted. For most of American history through the Vietnam War, a substantial portion of members of Congress had served in the military, and entering a war meant their own sons were subject to being drafted. Today, only 1 percent of Americans have served in the military and the portion in Congress is similar, Kaine said. Iraq and Afghanistan are also the first two wars in American history that were “put on a credit card,” rather than paid for while fighting, he said.

“If you didn’t serve, if your own kids are in no danger of serving, if you don’t have to pay for it, if you can let a president make a decision and not go on the board to vote for it, one way or the other, if you can hire Blackwater or some private contractor as mercenaries to do some of the work, where is the accountability?” Kaine said. “We should make this a momentous and difficult decision because the consequences are momentous and will be difficult.”

As an example of the powerful message of American consensus when Congress authorizes military force, Kaine pointed to America’s response to Syria’s use of chemical weapons last August on more than 1,400 civilians. By the time Congress had debated and approved Obama’s request to authorize the use of military force against Syria, Russia halted its longstanding protection of Syria at the United Nations, and Syria agreed to destroy its stockpiles of chemical weapons and its capacity to build such weapons.

“By going to Congress, having the debate and voting to use military force, we changed Russia and Syria’s calculations,” said Kaine, who was originally scheduled to speak at U.Va. in September, but had to cancel to participate in the Syria debate.

He argued that the process by which America authorizes military force also has implications for the controversial secret surveillance programs of the National Security Agency.

“Most of these programs are conducted on the premise that we are at war,” he said. “To give Americans confidence that we are appropriately balancing protecting our security with individual liberties, we have got to achieve a decision-making process that leads us to more consensus about military mission – when we undertake it and what the scope will be.”

A Year We Will Never Forget: 2019-20 in Review END_OF_DOCUMENT_TOKEN_TO_BE_REPLACED

‘What Will You Carry With You?’ Remarks From UVA President Jim Ryan END_OF_DOCUMENT_TOKEN_TO_BE_REPLACED