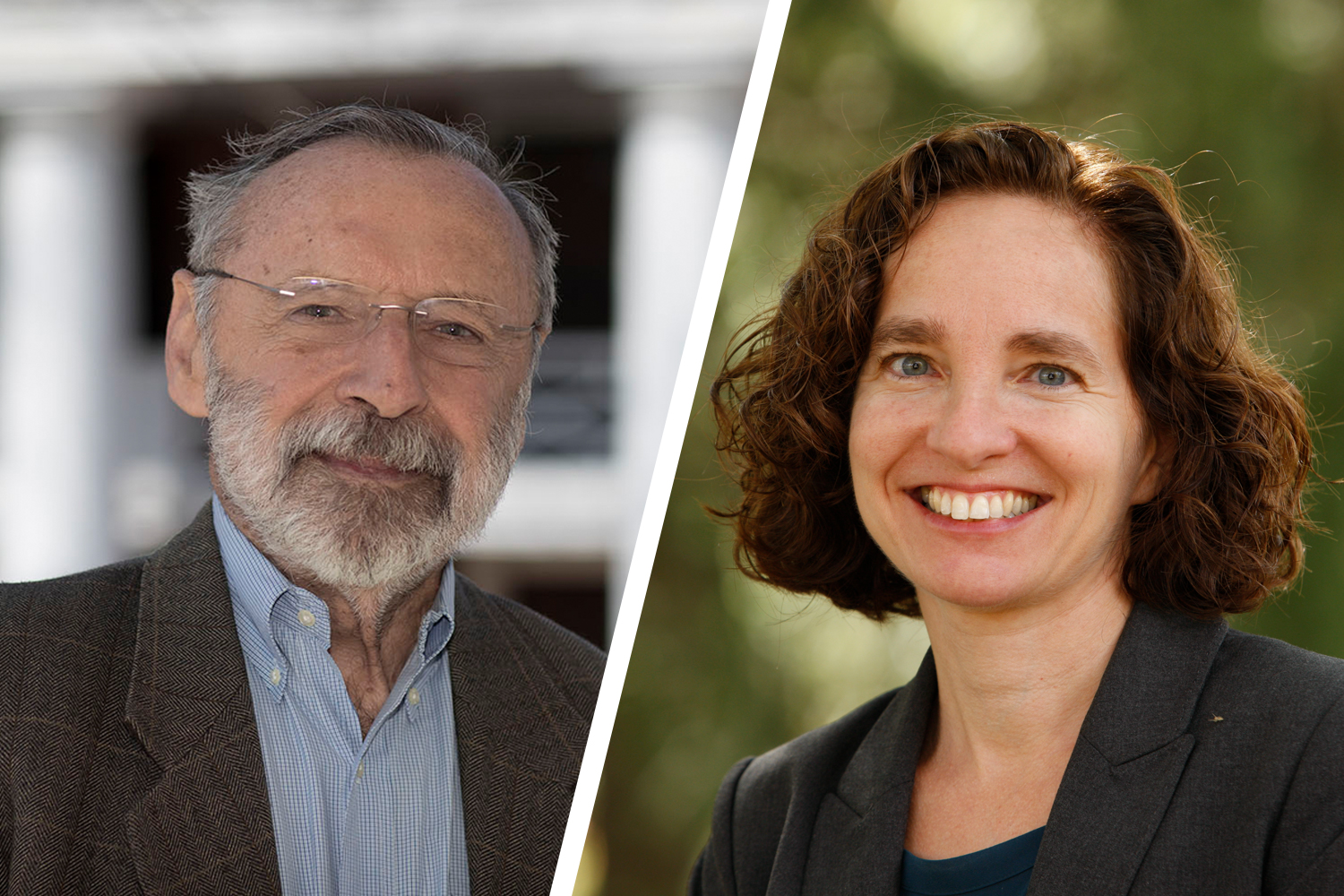 The academy, which announced its 2018 fellows Tuesday, is an honorary society founded in 1780 that recognizes achievement in the natural sciences, social sciences, law, arts and humanities. Its 4,900 fellows convene to address global challenges.

Goluboff and Miller are the 37th and 38th UVA scholars elected as Academy fellows, including President Teresa A. Sullivan.

The new class will be inducted at a ceremony in October in Cambridge, Massachusetts.

Goluboff, a nationally renowned legal historian who became the first female dean of UVA Law in 2016, is also the first woman on the school’s faculty to be elected to the academy. Her scholarship and teaching focuses on American constitutional and civil rights law, and especially their historical development in the 20th century. She is an affiliated scholar at the Miller Center and a faculty affiliate at the Carter G. Woodson Institute for African-American and African Studies. She was elected to the American Law Institute in 2017.

“It’s a privilege to be elected to the academy and to join such an esteemed group of scholars,” Goluboff said. “I’m deeply honored. I’m also thankful for the support the Law School and UVA have given me over the years, which has been critical to my growth as a legal historian and scholar.”

Goluboff is the author of “The Lost Promise of Civil Rights,” which won the 2010 Order of the Coif Biennial Book Award and the 2008 James Willard Hurst Prize. Her second book, “Vagrant Nation: Police Power, Constitutional Change, and the Making of the 1960s,” was supported by a 2009 John Simon Guggenheim Foundation Fellowship in Constitutional Studies and a 2012 Frederick Burkhardt Residential Fellowship from the American Council of Learned Societies. It received the American Historical Association’s 2017 Littleton-Griswold Prize, the 2017 Lillian Smith Book Award, the 2017 John Phillip Reid Book Award and the 2016 David J. Langum Sr. Prize in American Legal History, among other honors. Goluboff is also co-editor, with Myriam Gilles, of “Civil Rights Stories,” and the author of numerous shorter works.

In 2012, Goluboff was named a distinguished lecturer by the Organization of American Historians. From 2011 to 2016, she directed the University’s J.D.-M.A. in History Program. In 2008, Goluboff received the Law School’s Carl McFarland Award for excellence in faculty scholarship, and in 2011 UVA’s All-University Teaching Award.

After the protests in Charlottesville on Aug. 11-12, UVA President Teresa Sullivan appointed Goluboff to chair a working group of deans and community members to lead the University’s response.

Prior to joining the Law School in 2002, Goluboff clerked for Judge Guido Calabresi of the U.S. Court of Appeals for the Second Circuit and Justice Stephen Breyer of the U.S. Supreme Court. She also served as a Fulbright Scholar to South Africa.

Goluboff earned her M.A. and Ph.D. from Princeton University, her J.D. from Yale Law School, and her A.B. from Harvard University.

Miller, the Cary Johnson Jr. Professor Emeritus of History, taught the history of Africa, slavery and the slave trades, Atlantic history and world history at the University from 1972 to 2014.

His archival research in Portugal and study of oral traditions in Angola led to publication of “Kings and Kinsmen: Early Mbundu States in Angola” and a number of articles and chapters on the worlds of 16th- and 17th-century Africans. He compiled an annual series of bibliographies of modern scholarship in all western European languages on slavery, which have appeared in every volume of the journal Slavery & Abolition since 1980, continuing since 2004 under the curatorship of Thomas Thurston. The bibliography now contains more than 40,000 titles.

Miller’s major monograph, “Way of Death: Merchant Capitalism and the Angolan Slave Trade, 1730-1830,” won the Herskovits Prize of the African Studies Association for the best book published in English that year. His principal statement so far has been “The Problem of Slavery as History: A Global Approach,” which was presented as the first David Brion Davis lecture series at Yale University’s Gilder-Lehrman Center for the Study of Slavery and Abolition. He co-edited the Journal of African History from 1990 to 1996; four volumes of the Encyclopedia of Africa South of the Sahara; two volumes of the Macmillan Encyclopedia of World Slavery; five volumes of the New Encyclopedia of Africa and edited the Princeton Companion to Atlantic History.

Miller characterized his scholarship focus as “a commitment to bringing Africans respectfully into the mainstream of the history they share with the rest of us, and us with them. Over the years, that’s extended to an effort to understand the experiences of enslavement on global scales – again, painting the larger picture, into which fit the Africans brought to the Americas. On a world scale, they were far from alone, and the seemingly unstoppable removals of people that enslavement means in turn tell us something about ourselves that we’d all be better off recognizing.”

Miller said he is honored by his election. “What this election means to me is enormous humility at being recognized by my predecessors, people whom I admire enormously, the ones I know personally as human beings and all of them as the dedicated and accomplished contributors to human welfare that they are,” he said. “I’m proud that they seem to regard me as their peer.”

He is currently integrating about 2,000 years of unwritten history in central, eastern and southern Africa around slaving there, within the continent, as a strategy of creating historical changes – as it turned out, with the irony of gains for some coming only at enormous cost to others, turning into the tragedy of the Middle Passage.

“Slaving as a historical process, the theme of my last book is a critique of both fields – early Africa and comparative slavery – as based too narrowly on seeing the past in terms of static structures and other sociological concepts that miss the point of the strategy, if it’s inherently about making change happen,” Miller said. “It’s also an epistemological critique of thinking historically, which I think too many practicing historians forget as they try to work intuitively from the particularities of their research to some insight of broader applicability. They fall back on faint versions of social science models, but I think we’re all better off leaving institutions to social scientists trained to define them properly.”

Miller earned a Master of Business Administration from Northwestern University before turning to history scholarship at the University of Wisconsin-Madison, where he took his master’s and Ph.D. in African and comparative world history.

It’s Copperhead Season in Virginia. Here Is What You Need to Know END_OF_DOCUMENT_TOKEN_TO_BE_REPLACED

What’s Next for UVA’s Class of 2022? END_OF_DOCUMENT_TOKEN_TO_BE_REPLACED