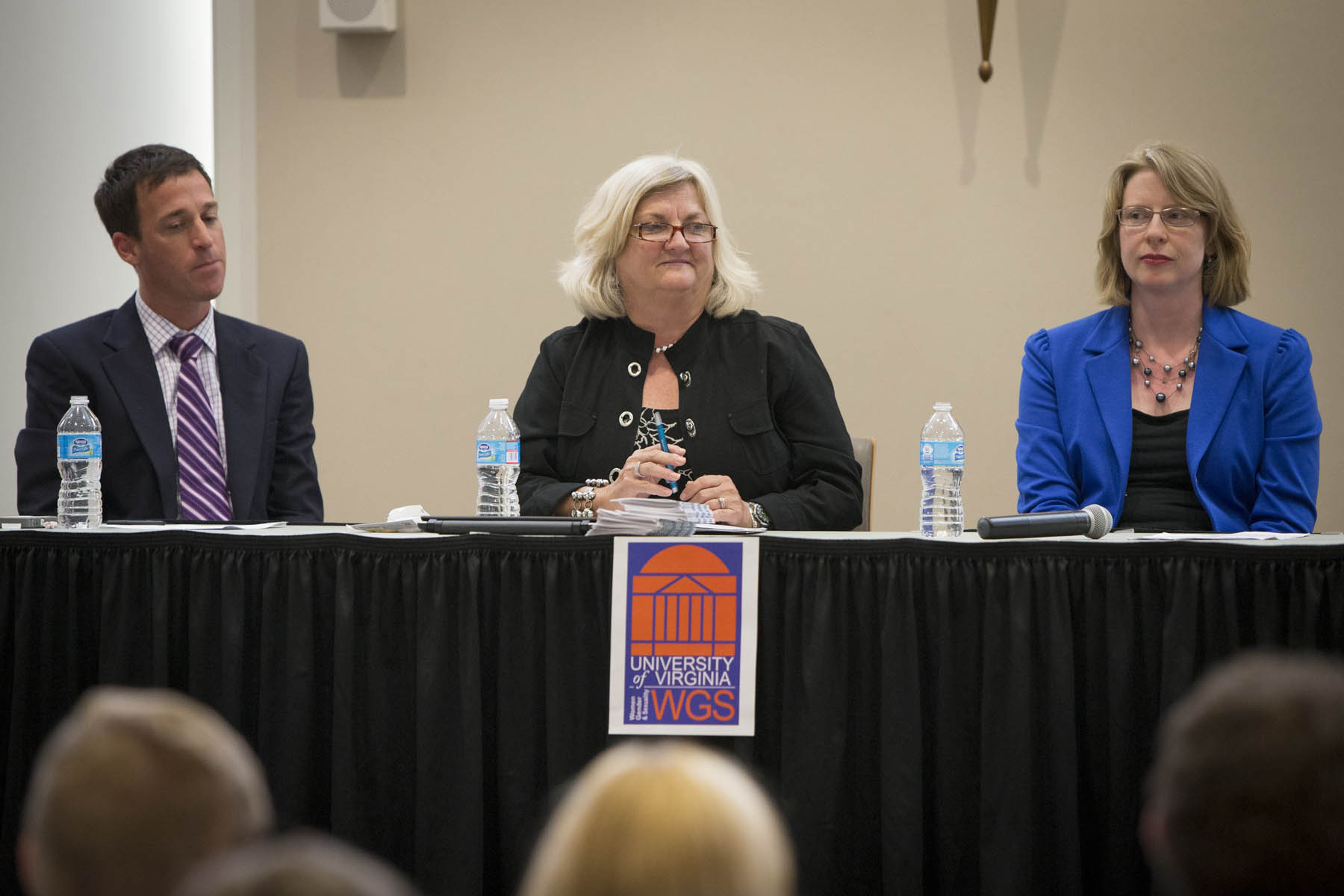 In 1967, Virginia still had a law on the books prohibiting marriage between white and black people; the rationale was that God did not intend for the races to mix. The law was finally overturned.

Similarly, one of the rationales for Virginia’s state constitutional amendment prohibiting same-sex marriage is the need to protect responsible procreation. In a class-action lawsuit, the American Civil Liberties Union will argue that is not a rational basis for having such a law.

A panel of same-sex marriage advocates at a University of Virginia event Wednesday sounded hopeful notes about changing Virginia laws in the aftermath of the recent U.S. Supreme Court decision striking down the federal Defense of Marriage Act. They also cautioned that much work remains to be done, possibly taking several years.

Wednesday’s event, “After Windsor: Changing Marriage Laws in the USA,” held in the Newcomb Hall Ballroom, was the first in a series of lectures and panels on lesbian, gay, bisexual, transgender and queer issues underwritten by a gift from Bernard Mayes, a retired University faculty member. The event was co-sponsored by the Women, Gender and Sexuality Program in the College of Arts & Sciences, the U.Va. LGBTQ Center and the School of Law.

The court’s decision in United States v. Windsor addressed only federal laws that apply to marriage and did not question state laws. The Supreme Court ruled that the section of the Defense of Marriage Act that prevented the federal government from recognizing marriages of same-sex couples violated the Constitution’s “equal protection” clause. Therefore, legally married gay couples will be subject to federal laws that apply to marriage, such as estate and income taxes, health insurance and retirement protections, Social Security benefits and immigration protections for bi-national couples.

Marriage laws are typically determined by the states, the court acknowledged, which made the federal law in effect impose marriage discrimination in the 13 states and the District of Columbia that currently allow same-sex marriage.

“It would be easy and will be inevitable to substitute ‘state’ for ‘federal’ government from his opinion,” she said. The laws are irrational, she said.

Virginia remains one of the states that defends heterosexual-only marriage, having passed the Marshall-Newman Amendment by a statewide referendum in 2006.

The change in federal law might give partial recognition to gay couples who reside in Virginia but were married in other states, but that is unclear at this point, Abrams said. Parrish said the Obama Administration has clarified that for federal purposes, in applying laws dependent on marriage the government will recognize the state where the marriage was celebrated rather than the state where the married couple resides.

Gastanaga, a U.Va. Law School alumna, said there is a greater chance of repealing Virginia’s law through the courts than through the legislature or another referendum. She said the ACLU has filed a class-action lawsuit, Harris et al. v. McDonnell et al., seeking to overturn the marriage amendment and hopes to prove there is no rational basis for the state’s prohibition against same-sex marriage. About 250 couples have submitted stories of discrimination due to sexual orientation, she said.

One of the couples in the case, who got married in Washington, D.C. and lives in Virginia, illustrates the confusion created by the conflicting laws, Gastanaga said. One spouse who works in D.C. is a married woman at work, but a single mother when she goes home to Virginia.

Parrish said he has been encouraged by the growing number of people who oppose Virginia’s law.

Along with the right to marry, LGBTQ people face other issues of discrimination, he said, in bullying, housing, adopting children and workplace fairness.

The panelists and Groves urged the audience to challenge elected officials, vote to change those opposing marriage equality and keep trying to change hearts and minds.

Groves – who made a point of saying he was speaking on a personal level and not in his professional position – said, “Marriage is so important, because when you normalize relationships through marriage, everything else changes toward equality.”

Q&A: Assessing the Risks and Rewards of Pelosi’s Plan to Visit Taiwan END_OF_DOCUMENT_TOKEN_TO_BE_REPLACED

These Giant Wind Turbines, Inspired by Palm Trees, May Be the Future of Renewable Energy END_OF_DOCUMENT_TOKEN_TO_BE_REPLACED