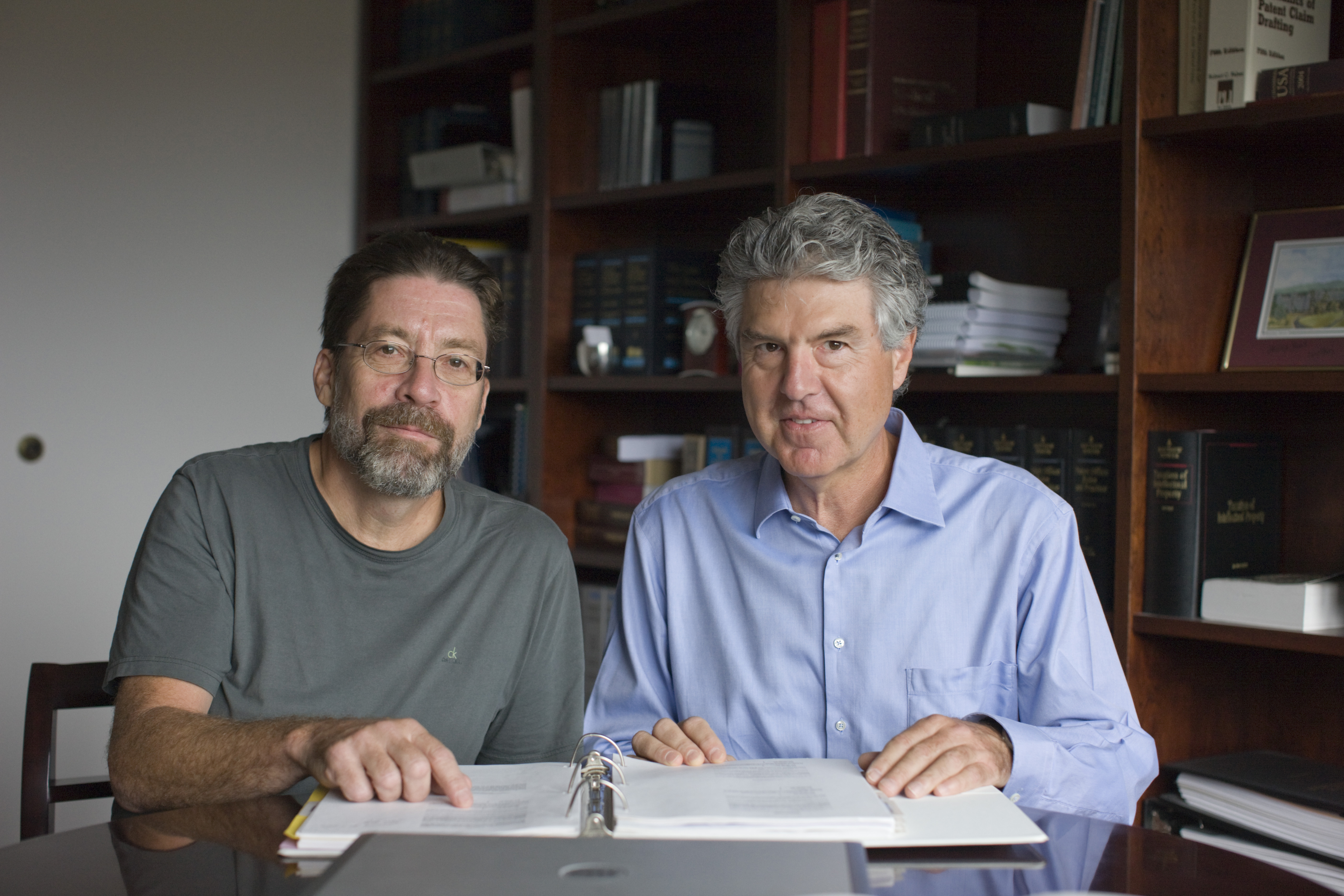 April 5, 2010 — The University of Virginia Patent Foundation named Kevin R. Lynch and Timothy L. Macdonald the 2010 Edlich-Henderson Inventors of the Year at a ceremony Monday evening. The highest honor bestowed by the U.Va. Patent Foundation, the Edlich-Henderson Inventor of the Year award each year recognizes an inventor or team of inventors whose research discoveries have proven to be of notable value to society.

Among the University's most prolific inventors, Lynch and Macdonald work at the intersection of chemistry and biomedicine. They were honored for their achievements in modulating the activity of two of the body's naturally occurring signaling molecules, sphingosine 1-phosphate (S1P) and lysophosphatidic acid (LPA). The inventors have developed a number of small molecules that mimic or block S1P and LPA at their receptors and thereby offer tremendous potential therapeutic benefits.

"We all have a certain S1P and LPA 'tone,' meaning a certain amount of these molecules is present in the bloodstream," said Lynch, a professor of pharmacology and biochemistry and molecular genetics at U.Va. "Why we have that, and the consequences of augmenting or lowering that tone, are unclear.

"If you have twice the LPA tone that I do, are you more at risk of developing atherosclerosis or a neuropathic pain syndrome? Less? What should we increase or lower your tone to for the maximum therapeutic benefit? We need molecules to figure that out."

Lynch and Macdonald are pioneers in this effort, having received the first research grant ever to be focused solely on LPA signaling in 1994 from the National Institutes of Health.

"This research has also evolved into S1P signaling, and today our collection of molecules is probably the largest in an academic setting," said Macdonald, professor of chemistry and pharmacology.

Because S1P and LPA have each been shown to influence cell growth, migration and survival, drug molecules that modify their behavior could be helpful in treating a variety of diseases involving these factors, such as cancer, fibrosis, autoimmune disorders and atherosclerosis.

"Through their pioneering efforts, Drs. Lynch and Macdonald have opened up a whole new world of possibilities for the treatment of cancer and other diseases," said Miette H. Michie, executive director and CEO of the U.Va. Patent Foundation. "In honor of their discoveries, the Patent Foundation is proud to name them the 2010 Edlich-Henderson Inventors of the Year."

Two of the researchers' S1P receptor molecules are currently in development with major pharmaceutical companies, each of which licensed the molecules from the Patent Foundation. Lynch and Macdonald also co-founded a biotech start-up company, Catena Pharmaceuticals Inc., in 2008 to put their LPA drug compounds on the path to the marketplace.

The researchers hold 14 U.S. patents and patent applications in this area, including two U.S. patents that issued in 2009. Their most recently issued patent (U.S. Patent No. 7,638,637) covers technology that enables their S1P receptor molecules to be taken orally, such that patients suffering from multiple sclerosis or other autoimmune disorders might one day be able to take a once-a-day pill rather than undergo injections to treat their symptoms.

The team's latest research centers on blocking the synthesis of S1P and LPA by inhibiting the enzymes that create the signaling molecules; one of these enzymes, called autotaxin, is known to play a role in cancer progression. The researchers are also involved in several other collaborations throughout the University. They are currently funded by the NIH, Abbott Laboratories, AstraZeneca Pharmaceuticals and the Ivy Foundation.

Macdonald is the Patent Foundation's first two-time recipient of the award, having shared the honor in 1997 with Dr. Richard L. Guerrant for their work in addressing the malnutrition and diarrhea of young children in undeveloped countries with glutamine-derived products and a cost-effective manufacturing process.

In addition to honoring Lynch and Macdonald, the U.Va. Patent Foundation recognized all U.Va. inventors who received U.S. patents [link to http://www.uvapf.org/patents09] and copyrights in 2009 at its annual awards reception April 5 in the Rotunda.

The University of Virginia Patent Foundation is a not-for-profit corporation that serves to bring U.Va. technologies to the global marketplace by evaluating, protecting and licensing intellectual property generated in the course of research at U.Va. The foundation reviews and evaluates nearly 200 inventions per year and has generated approximately $85 million in licensing revenue since its formation in 1977. For more: www.uvapf.org.

About the Edlich-Henderson Inventor of the Year Award

Named for U.Va. professor emeritus Dr. Richard F. Edlich and Christopher J. Henderson, the Edlich-Henderson Inventor of the Year award recognizes an inventor or team of inventors each year whose technology has proven to be of notable value to society. Award winners receive a $10,000 cash prize and formal recognition at the Patent Foundation's annual awards reception.