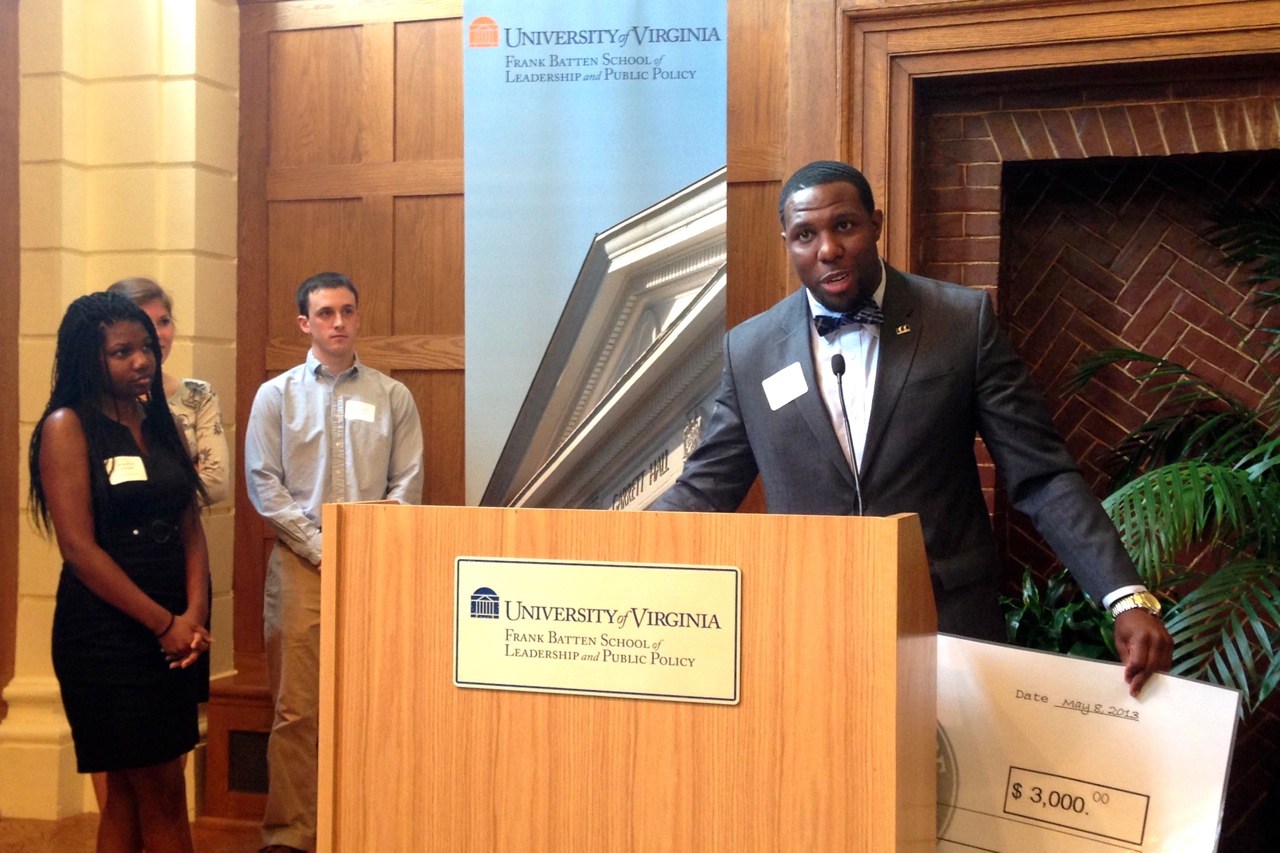 Students in a University of Virginia philanthropy course spent the semester researching, deliberating and deciding how to award $100,000 to charitable organizations. On Wednesday, they finally got to hand out the checks.

At a luncheon in the Great Hall of Garrett Hall, the students awarded grants to 14 nonprofits, 11 of them local. The awards ranged from $3,000 to $12,000, and the largest awards all went to local organizations.

The funds for the course in the Frank Batten School of Leadership and Public Policy were provided by the Philanthropy Lab of the Once Upon A Time Foundation of Forth Worth, Texas, to encourage students to think about philanthropy, said the course instructor, Paul Martin, Batten’s director of professional development and a former chair of the City of Charlottesville’s Community Development Block Grant Task Force.

The class allocated half of the foundation’s gift through an open, competitive grant process on the theme of “food.” With the remaining $50,000, the class divided into five “micro-foundation” groups, each with $10,000 to award toward a mission it selected.

The process “was time-consuming, challenging and thought-provoking,” second-year student Caroline Trezza told about 75 students, faculty and staff of the recipient organizations in Garrett Hall.

Indeed, in the process of vetting 26 organizations, the class collectively wrote 20 grant reports and more than 800 single-spaced pages worth of memos, visited eight sites and created five websites, Martin said.

In the process, the 24 students in the class, representing 16 majors from across the University, “learned to flexible, articulate, persuasive and open to, and open with, each other,” Trezza said.

“Recognizing our own power in this unique situation was both humbling and empowering in a lot of ways,” said Katy Hutto, a second-year Jefferson Scholar, double majoring in English and political and social thought in the College of Arts & Sciences. “We reached a compromise that truly speaks to a wide range of values and that represents our diverse interests in the community, both Charlottesville and the global community.”

“I am in awe of the work you’re all doing,” said Joe Caputi, Charlottesville branch manager for the Blue Ridge Area Food Bank, as he thanked the class for the $10,000 grant, which he said will buy 72,000 pounds – roughly two tractor-trailer loads – of fresh vegetables.

The other beneficiaries of the grants on the theme of “food” included the International Rescue Committee. The $8,000 award for its “New Roots” program “will go a long way toward helping refugees access local healthy food, space for community gardening programs, and ‘agro-preneurship’ projects,” staffer Courtney Cook said.

Two collaborating organizations, the Local Food Hub and the City Schoolyard Garden, each walked away with a check for $7,500. The money will help local children access fresh, healthy, local food, both at home and in school cafeterias, explained the organizations’ respective directors, Kristen Suokko and Jeanette Abi-Nader.

PACEM, an interfaith collaboration of congregations in Charlottesville that hosts a rotating homeless shelter during the cold-weather months, received a $5,000 grant.

Team members from each of the five student micro-foundations – each of which took on its own name, as well as its own focus – explained their chosen mission as they made their awards.

HYPE received $20,000 last spring from the same philanthropy class in its inaugural year. In the roughly 14 months since opening, the program has been able to raise participants’ cumulative GPA from 1.8 to 3.2, said program director Wes Bellamy, a teacher at Albemarle High School.

The “Jefferson’s Fishermen” team chose to focus on access to health care in rural Appalachia, and awarded $5,000 each to Remote Area Medical and the Rural Health Group.

The “Future Foundation” supported arts-based after-school programs, said Becca Christensen, a fourth-year double major in global development and philosophy. It awarded $2,500 to Live Arts and $7,500 to the Music Resource Center.

The “Hoos For Girls” group awarded $10,000 to the Sexual Assault Resource Agency to fund its sexual assault prevention education program.

The “Open Ground Change Foundation” elected to support social entrepreneurship, and awarded $10,000 to Village Capital. The Charlottesville-based organization invests in seed-stage social entrepreneurs around the world, explained staffer Lily Bowles, a 2012 U.Va. graduate who had advocated – unsuccessfully – for the group as a member of last year’s inaugural philanthropy class.

“One of the best parts of this course is introducing students to the exceptional work outside the University,” Martin said. “The other best part was introducing these organizations to the boundless energy and creativity of this group of students.”

What’s Next for UVA’s Class of 2022? END_OF_DOCUMENT_TOKEN_TO_BE_REPLACED