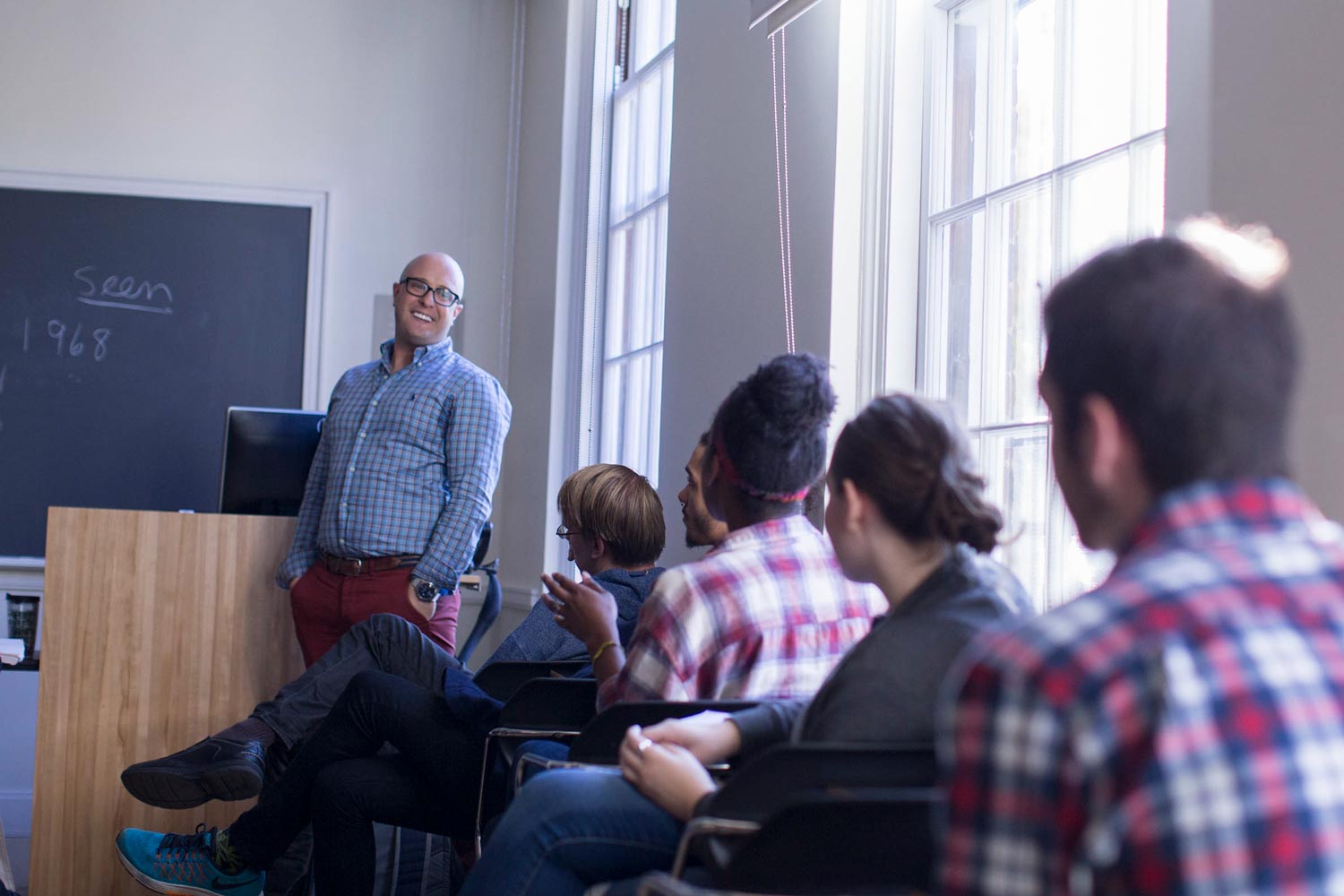 Cavalcante said the Showtime drama “Shameless” does one of the best jobs he’s seen of creating a character who is representative of people in the transgender community. (Photo by Sanjay Suchak, University Communications)

Transgender characters on television shows, in movies and in other mainstream media have never been more prevalent. But how do people in the transgender community feel about these characters, who are attempting to portray them?

These are questions that University of Virginia assistant media studies professor André Cavalcante addressed in his recent book, “Struggling for Ordinary: Media and Transgender Belonging in Everyday Life.”

Cavalcante, who has a dual appointment in media studies and in women, gender and sexuality, interviewed hundreds of transgender people about their experiences with media throughout their lives.

“I wanted to see what they made of this new visibility,” Cavalcante said, “because historically, there had been either nothing or pretty awful representations.”

Cavalcante went into the project assuming that media played a role in the everyday lives of transgender people. He just didn’t realize the magnitude of that role.

“As I started talking with them, many of them said they didn’t even know the word ‘transgender’ existed or that the identity was a possibility until they saw it on television or in a movie or until they Googled it,” Cavalcante said. “These media moments were really transformative for them in terms of their self-understanding and also in terms of what they thought was possible.”

In the 1980s and ’90s, Cavalcante said the most popular television shows for transgender people were tabloid shows like “Jerry Springer,” “Ricki Lake” and “The Sally Jessy Raphael Show,” because they were some of the only programs that featured people like them.

“Trans people were paraded around like freaks – like these oddities of nature,” Cavalcante said. “But a lot the participants in my study were like, ‘Yeah, I saw that and I didn’t like the way the audience treated them, but they looked beautiful to me and were confident in who they were, and I realized I could do that and wanted to be that.’”

The portrayal of transgender people in movies around that time wasn’t great either. Cavalcante said characters fell into three main “stock characters” that you would see over and over.

Based on his research, Cavalcante believes the good news is that current movies and television shows, for the most part, are doing a better job of avoiding these stereotypes.

In the television show, “Transparent,” a successful older white man in Los Angeles with grown children is transitioning to life as a woman. In “Orange Is the New Black,” an African-American trans woman finds herself in prison. In “Shameless,” a young trans man works for an organization that helps find homes for runaways.

“Compared to the history of transgender representation, what we see now is leaps and bounds superior,” Cavalcante said. “It’s definitely moving in the right direction.”

Cavalcante said “Shameless,” a Showtime drama set in Chicago, does one of the best jobs he’s seen.

“A lot of the focus is usually around trans women and very rarely in the media do you see trans men,” Cavalcante said. “In this particular instance, you have a young, good-looking trans guy who is very confident in being trans – but that isn’t the only thing about him. The character has a full life, volunteers, is part of the community.”

In his book, Cavalcante covered the period of time leading up to what he calls the “trans tipping point” – when former Olympic hero Bruce Jenner became Caitlyn Jenner.

“What is so interesting about Caitlyn Jenner is that she’s a very controversial figure, both within the trans community and outside of it,” Cavalcante said. “She’s a highly unusual case. This is someone with all of the resources and all of the money to get the clothes and the makeup and have whatever kind of medical or surgical interventions she wants. She can afford all of that. So a lot of people were concerned that people would think, ‘This is what it means to be trans.’ And she really didn’t know much about trans life or trans communities or transgender politics.

“But what she did do was she put the question of transgender on the national agenda. People starting talking about it and it became less fringe. So while I don’t think she’s necessarily the best spokesperson for the trans community, she definitely put it on the national agenda in ways it hadn’t been before.”

Cavalcante enjoys discussing these types of issues – and other themes from his book – with students in his classes.

“There are transgender students at UVA – I see them in my classes and in the LGBTQ clubs and events that I’m a part of and help organize. I think one of the beautiful things about teaching it is that it’s a way of recognizing that they exist. It’s a form of recognition.”

When Less Is More: How Harnessing the Power of Subtraction Can Add to Life END_OF_DOCUMENT_TOKEN_TO_BE_REPLACED