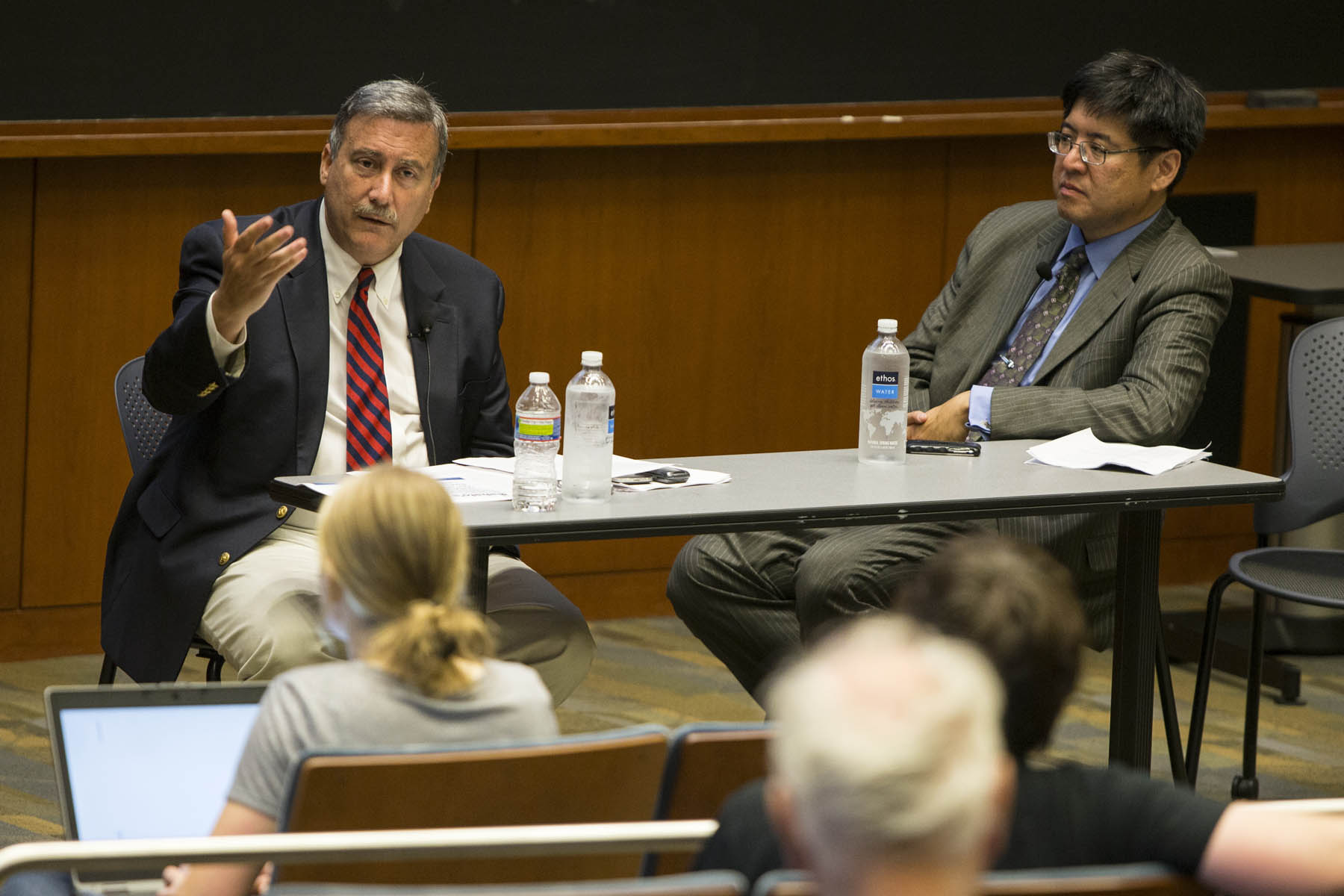 Sabato is the director of the U.Va. Center for Politics. His website, Larry Sabato’s Crystal Ball, has accurately predicted 98 percent of Senate, House and gubernatorial races in the past four election cycles. He uses statistical models, information from select polls and expert analysis to predict election outcomes.

Wang, an associate professor of molecular biology at Princeton, used his expertise in probability and statistical analysis to found the Princeton Election Consortium in 2004. The site compiles aggregate data from all available state polls to provide “snapshots” of the current public opinion and predict elections. Wang also provides commentary on the results.

Sabato started the discussion by addressing the changes in voter consistency since the Carter administration. “It’s been getting easier to predict presidential elections, because trends in party loyalty are increasing,” he said. “We’ve had a polarizing of the parties: Almost all liberals are Democrats, and almost all conservatives are Republicans.”

That doesn’t mean that all elections are easily predicted. Noting that the Crystal Ball is the nation’s only site that predicts every House of Representatives race, Sabato said, “Good polls are harder to come by for the lower elections, especially in the House. You have to know which models are going to be right from year to year. But they’re often inconsistent.”

For Wang, predicting elections was a hobby that provided him a way to apply science to politics.

“In 2000, it drove me crazy to read a bunch of the polls,” he said. “I was telling my friends to watch out for Florida early on – and I was so frustrated with the current media landscape. Good information and bad information get mixed up in the media. All I do is show you how things are.”

The men shared quotes from several media pundits during the 2012 presidential election, where many were predicting a Romney win, or a “too close to call” vote. Throughout the election cycle, both Sabato and Wang had used their methodologies to predict a sizable Obama win – and on election night, Obama received 332 electoral votes to Romney’s 206.

“Pundits don’t get paid to be right. They get paid to bring in an audience,” Wang said. “There is value in sharing how things are in a snapshot in time and getting rid of media noise. And it’s a challenge to keep your opinions out of it, for even the best analysts.”

Sabato agreed. “The [pundits] who are really rewarded are the ones who say everything is a toss-up,” he said. “I’ll probably eat these words later, but I bet you that in 2016 that they rely more on data-based sites like ours after their predictions went so wrong in 2012.”

The aggregation of polls does not sway public opinion, the men said. “People make their opinions not because of anything pundits or other ‘experts’ say,” Wang said. “In this past election, the public favor for Obama only dipped after his ‘poor’ performance after the first debate.”

Paul Friedman, professor of politics and frequent contributor to the Crystal Ball blog, moderated the discussion, which took place in the Nau Hall auditorium.

The new minor in statistical analysis of social behavior furthers the University’s strategic goal of integrating ‘big data’ in the classroom. The minor is designed to prepare social science majors in fields such as politics, economics and sociology with extra statistical training, which will equip them with data analysis skills that are highly valued in their fields.

This year’s first-year students will be the first who can organize their academic plans around the minor’s required schedule, which includes extra work in math, statistics and discipline-specific quantitative analysis courses.

What’s Next for UVA’s Class of 2022? END_OF_DOCUMENT_TOKEN_TO_BE_REPLACED