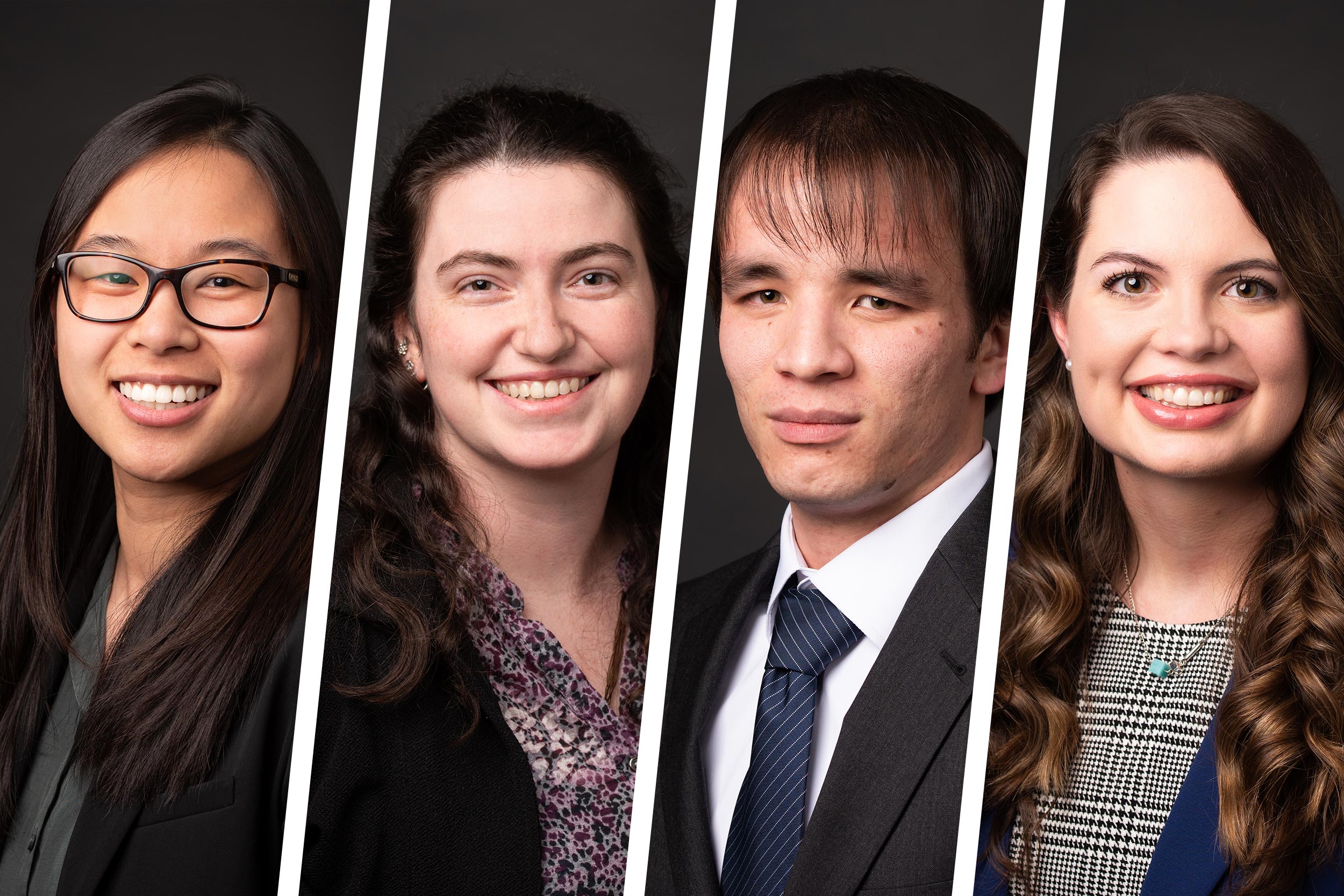 Two current University of Virginia graduate students and two alumni are serving as Christine Mirzayan Science and Technology Policy Graduate Fellows at the National Academies of Sciences, Engineering and Medicine in Washington, D.C.

No other university is as well-represented this year in the prestigious 12-week fellowship program, which exposes early-career individuals to policy issues involving science and technology, and provides a greater understanding of the role that scientists and engineers play in advising the nation.
“Four fellows in one class with connections to a single university ties the record in the Mirzayan program,” said Joel Baumgart, a senior research program officer with UVA’s Office of the Vice President for Research. [The University of California, Berkeley also had four students/alumni in the 2004 class of fellows.] Baumgart himself was a Mirzayan Fellow in 2009, after earning his Ph.D. in neuroscience from UVA.

In the 21-year history of the program, eight UVA students or alumni had previously been Mirzayan Fellows. Courtney Hill, a civil engineering Ph.D. student and a Jefferson Scholar, participated in last year’s class.

The program is immersive; each fellow is assigned a mentor, who helps broaden the fellow’s understanding of issues involving science and technology policy and ways she or he might help to better society through potential policy careers outside of academia. Alumni of the program frequently hold positions in congressional committees and at federal agencies.

The UVA students/alumni in this year’s Mirzayan Fellows class are:

DaCrema, who works in the lab of cell biology professor Adrian Halme, conducts research into how cells regenerate during development. She says she enjoys doing research, but is even more passionate about communicating science to non-scientists.

During her Mirzayan Fellowship, she’s met with scientists who are staffers for members of Congress, government agencies and with private companies such as Pew, MITRE and Lewis-Burke Associates. She’s also attended committee meetings on Capitol Hill, a forum on the history of space policy at the Smithsonian Institution, and a women’s leadership in policy event sponsored by The Hill news organization that included female U.S. Representatives.

DaCrema also has conducted a literature review for the Committee on National Statistics at the Academies, where she had to find, process and distill technical documents involving information technology, sociology and statistical journals – all areas outside of her biological training.

“It’s been a lot of fun having extremely valuable opportunities that would have been much more difficult to do without the fellowship,” she said. “The most valuable thing for my career has been the experience to use my training as a scientist outside of the field that I’m expert in. It’s an extremely comforting feeling now that I’m approaching the end of my Ph.D. and am looking at job opportunities outside of academia.”

Grimes, the other current Ph.D. candidate who won a Mirzayan Fellowship and works in the lab of professor Lisa Colosi Peterson, said she’s long had an interest in using science to advise societal change and improve environmental and human health.

After completing her Ph.D. in civil and environmental engineering next year, Grimes plans to work in policy at a federal agency or a nongovernmental policy organization, such as the National Academies.

She describes her fellowship experience as a “whirlwind of constant learning.”

“These days, most Ph.D.s are not staying in academia,” she said. “Therefore, I think it’s so important for Ph.D. students who are interested in careers outside of academia to take advantage of career development opportunities like the Mirzayan Fellowship or industry internships to explore their interests and diversify their skillsets.”

What it Means to Be a Cavalier Baseball Player END_OF_DOCUMENT_TOKEN_TO_BE_REPLACED