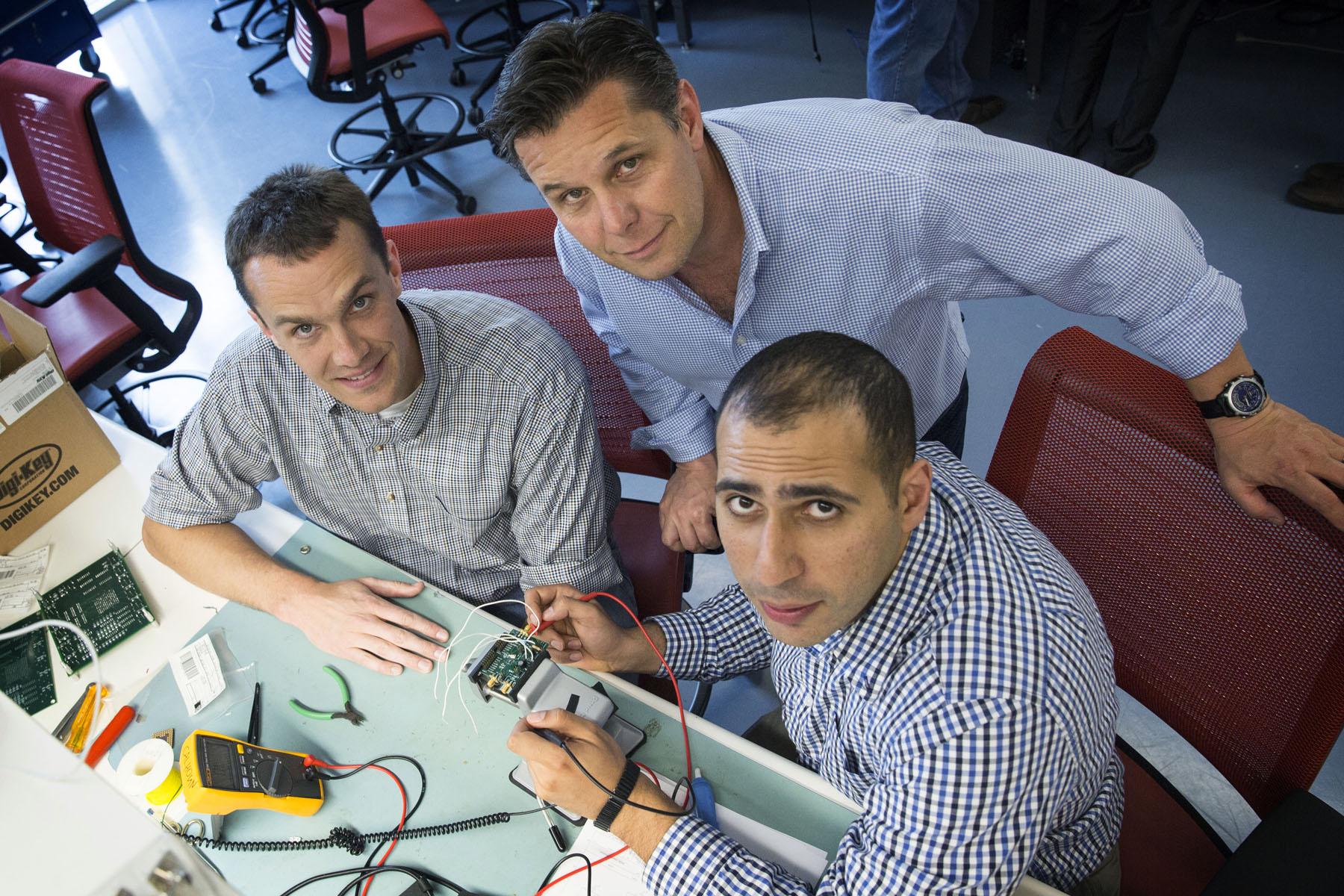 Update: PsiKick entered 2016 with a major investment boost of $22 million. This Series B, or second-stage, financing came from combined investments by Osage University Partners, New Enterprise Associates, the University of Michigan Investment in New Technologies Fund and individual angel investors. The new funds were intended to allow for expanded hiring of engineering talent and continued development of systems for PsiKick’s self-powering “Internet of Things” technology. Today, the company maintains offices in Charlottesville; Silicon Valley, California; and Ann Arbor, Michigan.

Research from the University of Virginia and the universities of Michigan and Washington is the foundation of a startup company, PsiKick, that plans to manufacture the lowest-power wireless sensors in the world.

These chips could play a major role in an anticipated technology revolution being called the “Internet of Things,” the “Sensor Revolution” or the “Industrial Internet” – a future where countless everyday items, from doors to gym equipment, have embedded wireless sensors tied together in a vast wireless network that enables countless new “smart” behaviors. For instance, an exercise bicycle might queue up your preferred workout the minute you walk through the door of the gym, perhaps based on the number of steps you’ve already taken today as recorded by your smartphone.

Founded in 2012, PsiKick recently received a major vote of confidence in the form of early-round funding from New Enterprise Associates, one of the largest venture capital funds in the world, which has helped launch dozens of now-influential technology companies, from TiVo to WebMD, Coursera, HealthSouth and Vonage.

NEA partners Greg Papadopoulos and Forest Baskett will both join PsiKick’s board of directors in conjunction with the financing. Both are former professors of electrical engineering and computer science (at the Massachusetts Institute of Technology and Stanford University, respectively) who went on to become chief technology officers at two of the most revered companies in Silicon Valley: Sun Microsystems and Silicon Graphics.

“These are two of the best guys in the world that we could have on our board,” Brendan Richardson, PsiKick CEO and co-founder, said. “Both of them have helped build a billion-dollar company from the ground up. Having them looking over our shoulder is truly invaluable.”

Michael P. Straightiff, director of the U.Va. Licensing & Ventures Group, echoed that sentiment. “While the funding flowing to PsiKick is critical to the company’s near-term progress, we are even more excited by the expertise and networks that the partnership with NEA will yield.”

PsiKick’s chips can be paired with existing sensor circuits to wirelessly monitor and analyze nearly anything, from sound, light or electric impulses from the body to movement or vibrations, Richardson explained. There are already lots of wireless sensor systems out there, “but they all require a battery power source,” he said.

That’s where PsiKick chips are a “potentially disruptive game-changer” for the coming explosion of embedded electronics, said Richardson, a graduate of the McIntire School of Commerce who now lectures there on entrepreneurship after working as a venture capitalist, angel investor and startup adviser for more than 20 years.

Because PsiKick chips are incredibly energy-efficient, requiring 1/100th to 1/1,000th of the power needed by existing sensors, they don’t need batteries. Instead, PsiKick chips can operate by harvesting readily available power sources, such as human body heat, vibration or ambient light.

For the Internet of Things to happen in any form, “low-power circuits are needed,” said Benton Calhoun, an associate professor of electrical and computer engineering in the School of Engineering and Applied Science, who has been working on ultra-low-power circuits for more than a decade, beginning in graduate school at MIT, where he built on an interest in embedded computing he developed while earning his B.S. in electrical engineering from U.Va. in 2000.

Calhoun co-founded PsiKick with Richardson and a friend and fellow researcher from MIT graduate school, David Wentzloff, who is now an associate professor of electrical engineering at the University of Michigan.

In recent years Calhoun’s research as a U.Va. professor has been supported by grant funding from the National Science Foundation and U.Va.’s Wallace H. Coulter Foundation Translational Research Partnership.

“The most rewarding part of this has been working with my students on the technology and seeing it now translate out into the world,” Calhoun said.

Yousef Shakhsheer, who just earned his Ph.D. in electrical engineering from U.Va. under Calhoun, shared a similar sentiment. “It’s exciting to get to walk this tech through academia to commercialize it, to bring this out to the real world and apply it. That’s an opportunity that few people get.”

Shakhsheer is one of five newly minted or soon-to-be Ph.D. graduates from U.Va. and Michigan who are joining PsiKick as design engineers, having worked on this research for several years under Calhoun and Wentzloff.

Shakhsheer was part of Calhoun’s research team that partnered with a research team at the University of Washington, led by Brian Otis, associate professor of electrical engineering, to develop the first-ever batteryless wearable electrocardiogram sensor in 2011, some of the foundational research that underlies PsiKick’s products.

PsiKick’s first major products may well be wearable sensors, building on that earlier proof of concept to create a wearable, long-term health monitor of a patient’s vital signs like heart rate, breathing or even the brain function of a patient with epilepsy or Alzheimer’s, Richardson said.

“This has the potential to revolutionize the way we do medicine,” said Shakhsheer, who earned his undergraduate degree in computer and electrical engineering from U.Va. in 2008.

“Brendan and his team are integrating the state-of-the-art in ultra-low-power processing, power management and next-generation wireless concepts to produce a novel ultra-low-power system,” new PsiKick board member Papadopoulos said. “The resulting platform is a stunning technological achievement and a gateway to the next wave of wearable devices.”

Launched in June 2012, PsiKick has licensed technology from the universities of Virginia, Michigan and Washington and received its first seed funding from a group of angel investors in Charlottesville. Since then, the company has made its first chips, won multiple contracts with various Department of Defense agencies and engaged with more than 20 customers for its ultra-low-power platform.

The latest funding comes from New Enterprise Associates along with Osage University Partners and MINTS, a University of Michigan venture fund.

With this new round of financing, the company will expand its sales, marketing and engineering teams and rapidly accelerate product development, Richardson said.

“We are delighted to see a company with a partnership of this caliber emerging from the Charlottesville ecosystem,” said W. Mark Crowell, executive director of U.Va. Innovation and associate vice president for research.

“There probably is no single university in the world that could have accomplished this,” Richardson said. “This required three major research universities with research groups, each of which brought unique world-class strengths, working together closely over many years to overcome the challenges involved and come up with something that is groundbreaking. You don’t see that very often across institutions.”

Netflix to Add Ads. Why This Could Be a ‘Game-Changer’ for Your Viewing Experience END_OF_DOCUMENT_TOKEN_TO_BE_REPLACED

What’s Next for UVA’s Class of 2022? END_OF_DOCUMENT_TOKEN_TO_BE_REPLACED