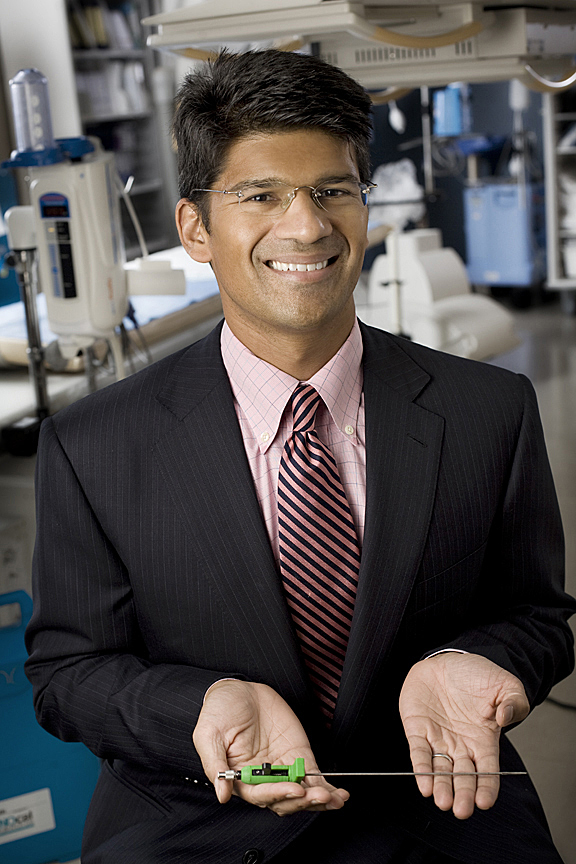 July 8, 2010 — EpiEP Inc., a medical device company spun out of the University of Virginia, has received $1.5 million in investments and commitments for the development of its novel EpiAccess system, which shows promise to improve and expand the treatment of cardiac arrhythmia and other heart conditions.

Based on technology invented by U.Va. faculty members Dr. Srijoy Mahapatra and George T. Gillies and licensed from the U.Va. Patent Foundation, the EpiAccess system has the goal of providing minimally invasive access to the epicardium, the heart's outermost tissue.

"A significant potential advantage of the EpiAccess system is its ability to help electrophysiologists navigate the tip of the access needle safely onto the outside wall of the heart, thus providing a ready pathway for the instrumentation, such as a catheter or pacing lead, needed to treat arrhythmias," said Gillies, research professor of mechanical engineering, biomedical engineering and physics at U.Va.

Enabling this access are the system's on-board retractable needle and sensor capable of measuring the pressure-frequency signals of target tissues. A software algorithm analyzes the pressure-frequency data to help safely guide clinicians' movement of the needle to the correct site. In addition, the system requires only one 3-millimeter incision, making it much less invasive than standard surgical methods.

"Any time you reduce the risks of a procedure, as we have done with this system, you in principle make treatment available to more people," said Mahapatra, cardiologist and assistant professor of internal medicine and biomedical engineering at U.Va. "Because this technology is less invasive, we hope to use it to treat people who are currently not being treated."

The objective is ultimately to use the technology to treat patients suffering from cardiac arrhythmias, such as atrial fibrillation and ventricular tachycardia – and to do so without making a hole in the right ventricle, as Mahapatra says occurs in as many as a third of patients who are treated with existing surgical techniques.

With its advanced precision, the system might also one day be used for safer pacemaker lead insertion, for stem cell and drug delivery, and to reduce the risk of stroke presently associated with endocardial procedures.

The U.Va. Patent Foundation has filed for international patent protection on the researchers' discoveries, which it licensed to the company in April.

"By joining forces as an interdisciplinary, clinician-researcher team, Drs. Gillies and Mahapatra have been able to combine their efforts and unique insights to create a device with the potential to change the quality of life for many people with heart disease," said Miette H. Michie, executive director and CEO of the Patent Foundation. "We applaud them on the development of this innovative system, and we are so pleased to see EpiEP taking this technology to the next stage."

EpiEP received $1 million from Connecticut Innovations' Eli Whitney Fund with additional funding from LaunchCapital and private investors, completing its first round of funding. The company is now headquartered in New Haven, Conn.

The investigators' research was funded by the Johnson & Johnson Corporate Office of Science and Technology, the Wallace H. Coulter Translational Research Partnership and revenues from the U.Va. Patent Foundation.

The University of Virginia Patent Foundation is a not-for-profit corporation that serves to bring U.Va. technologies to the global marketplace by evaluating, protecting and licensing intellectual property generated in the course of research at U.Va. The Patent Foundation reviews and evaluates nearly 200 inventions per year and has generated approximately $85 million in licensing revenue since its formation in 1977.

EpiEP Inc. is a medical device company that is developing a platform of novel access systems which utilize a unique signature waveform to identify in real time that accurate and safe access are achieved for the minimally invasive treatment of cardiovascular disorders. The technology has been licensed from the University of Virginia Patent Foundation, and EpiEP seeks to develop the technology into commercially viable medical devices.

Should Alcohol Have Warning Labels About Cancer Risk? Most Americans Say ‘Yes’ END_OF_DOCUMENT_TOKEN_TO_BE_REPLACED