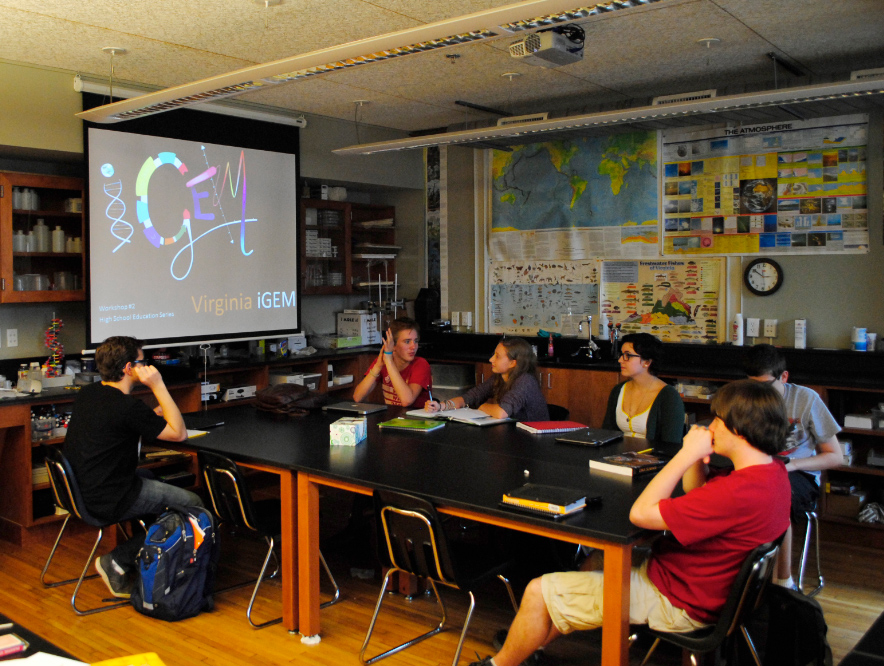 The U.Va. iGEM team is designing an introduction to synthetic biology for local high school students at the Renaissance School (pictured), an effort cited by judges who awarded the team a trophy for Best Human Practices.

A team of 13 students from the University of Virginia has advanced to the final round of an international genetic engineering competition. Starting Nov. 1 at the Massachusetts Institute of Technology in Cambridge, Mass., they will compete alongside the 14 other top collegiate teams from North America and roughly 40 other teams that advanced from three semifinal championships covering Latin America, Asia and Europe.

The International Genetically Engineered Machine (or iGEM) Competition is an annual undergraduate contest in synthetic biology, an emerging discipline at the interface of biology and engineering in which designed molecules, viruses and cells are engineered from standardized parts, known as “biobricks,” to solve human problems.

Team Virginia faced 63 other collegiate teams at the North America Regional Jamboree, the semifinal round of the competition, held Oct. 4-6 at the University of Toronto. They took home a gold medal, a trophy for “Best Human Practices” and an invitation to the Global iGEM Championship.

“In the world of scholarship, this is on par with our U.Va. athletic teams winning a Division I championship or being invited to the Olympic Games as individuals,” said Tom Skalak, vice president for research, in an email congratulating the team.

Team Virginia’s project harnesses a forgotten discovery from the 1950s – the bacterial mini-cell, a product of aberrant cell division that can serve as a standardized “bacteria chassis” with an invaluable safety feature, explained team leader Shaun Moshasha, a graduate student in the McIntire School of Commerce who graduated in May with a double major in physics and biochemistry. The mini-cell is fully compatible with standardized biobrick parts, but unlike normal bacteria, the mini-cell lacks chromosomes so it cannot replicate, mutate or express virulent bacteria genes, addressing long-standing public concerns that synthetic bacteria may replicate or mutate beyond a scientist’s control.

These mini-cells can “serve as an innocuous, multiple-purpose nano-chassis for the delivery of medical therapeutics,” representing a “foundational advance in synthetic biology,” said one of the team’s faculty advisers, Keith Kozminski, a biology professor.

The trophy for Best Human Practices was awarded to the team in recognition of the team’s analysis of the biosafety advantages of the mini-cell as well as for the team’s outreach to design and teach an introduction to synthetic biology for local high school students.

In an intense nine months leading up to the competition, Team Virginia had to “identify a project, work through all the background literature, learn to manage resources, perform research in an emerging field, deal with hurdles of project management and unexpected failures in their experiments and still push forward and accomplish something of real value,” said Jason Papin, a biomedical engineering professor and another team faculty adviser.

It all came down to a 20-minute presentation in Toronto, where the team’s three presenters – Chris Cai, Bethany Bruno and Jessica Yoo, all second-year students – “delivered a stellar presentation, akin to completing a vault in the Olympics by landing both feet on the mat without a wobble,” Kozminski said.

“The sheer energy and enthusiasm that permeated the event was unlike any ordinary research conference that I had ever been to,” Yoo said.

Looking ahead to November, she added, “I cannot help but feel that same tingle of excitement and the surge of adrenaline that had kept me going on an average of one or two hours of sleep a night while preparing for the Regional Jamboree.”

This will be the second year in a row that the U.Va. team has advanced to the Global iGEM Championship. Last year’s team developed a new diagnostic test for whooping cough using bacteriophages, an idea that went on to win the 2012 U.Va. Entrepreneurship Cup. Three of those team members are dedicating a year to further research and development of the test.

At UVA, There Is a Club for Everyone END_OF_DOCUMENT_TOKEN_TO_BE_REPLACED