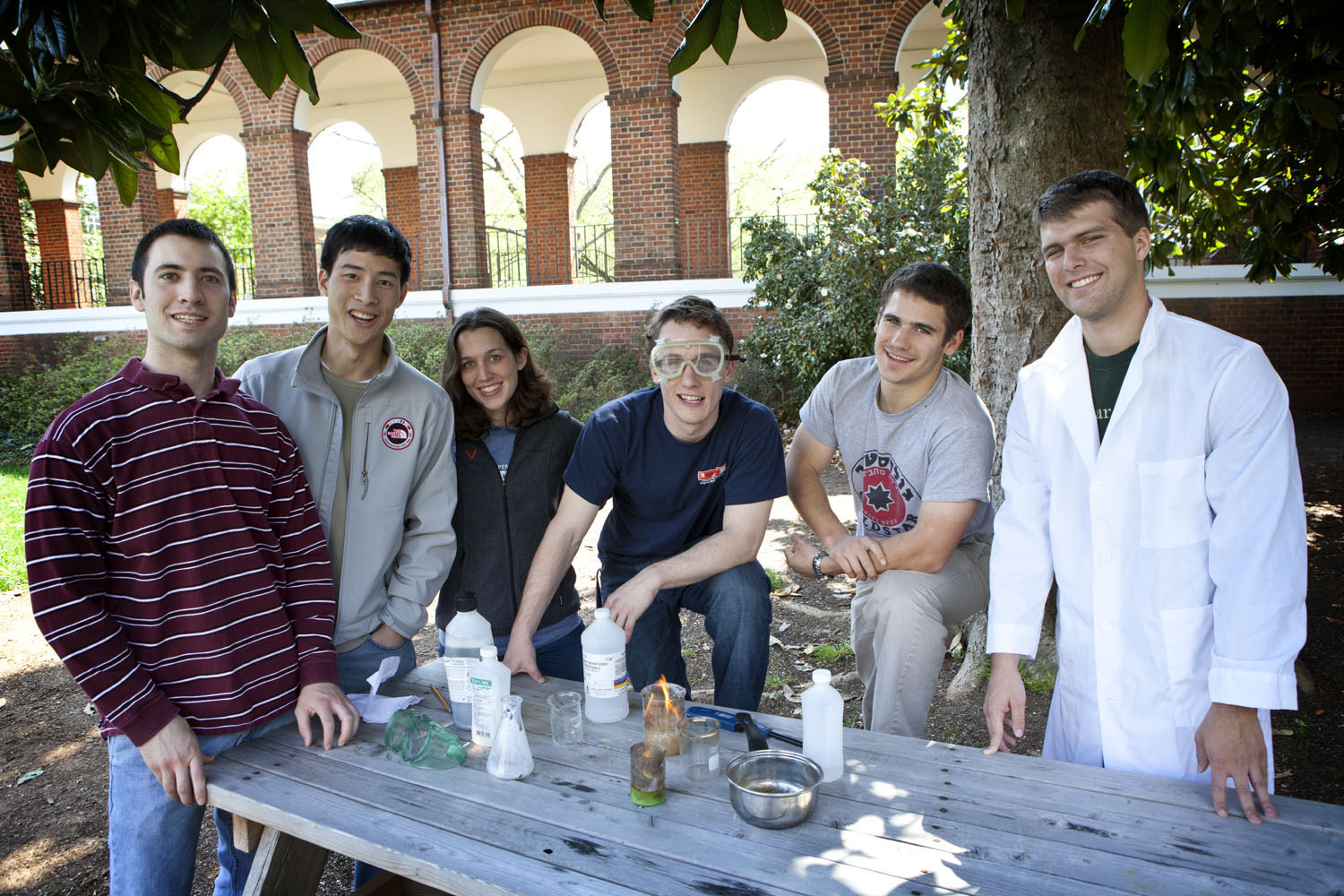 A group calling itself the "Wahoo Wizards," along with other University of Virginia student groups and faculty members, has an idea: Start young, and wow them with hands-on scientific experiences.

Though U.Va.'s nationally ranked School of Engineering and Applied Science is in their backyard, many young people in the Charlottesville area don't know about it, let alone understand the discipline. U.Va. faculty members and students are seeking to change that by educating youth from elementary through high school about the field and its numerous career opportunities.

Adam Christian is vice president of service and Cynthia Zahrah is a co-chair of the Wahoo Wizards, a network of student volunteers from all disciplines at U.Va. who bring science demonstrations to local elementary schools. The Wizards started 11 years ago in conjunction with Madison House, and three years ago became its own group in affiliation with the American Institute of Chemical Engineers.

"What's great about it is the people who go actually really enjoy it," said Christian, a third-year computer science major in the Engineering School who joined the Wizards as a first-year student. Since then, he has seen students majoring in chemistry, biology and even English join the organization.

The group, which takes about 15 students on each outing, gives interactive science lessons in the style of "Bill Nye the Science Guy," using things like "gak," a substance that has principles of both a solid and a liquid; lasers; salts that burn different colors when ignited; and even a hovercraft on one occasion.

A favorite for the kids and U.Va. students alike is the liquid nitrogen demonstration, in which a student drops a pretzel into liquid nitrogen to quick-freeze it, then puts it in his mouth, which happens to have water in it. As the pretzel changes the water in the student's mouth to fog, the student can blow vapor out of their mouth like a dragon.

Christian said he loves seeing students' reactions to such demonstrations - especially those at the younger grade levels, who he considers more receptive.

"We've done ninth- and 10th-graders before but ... it's easier to get kids excited about science earlier," Christian said. "When you plant the seed really early, it seems to work out a lot better."

James Groves, an assistant dean of engineering, noted that students tend to make their decision to pursue "STEM" studies - that's science, technology, engineering and mathematics - long before they reach the 11th or 12th grade. If teachers can reach students early and get them excited and interested, "then they can sop up some important concepts before they even realize how it's going to empower them in the future," he said.

Pre-high school introduction can also help students plan their math and science coursework to make a smoother transition into engineering in college.

Zahrah, a fourth-year chemical engineering student who joined the group in her second year, said she enjoys being approached by students who remember and recognize her year to year and is often surprised by the sophistication of students' answers to demonstration questions.

After years of attending classes as a student, "It's a different experience being on the other side of the desk, trying to teach them," Zahrah said.

Kathryn A. Neeley, a professor in the Engineering School's Department of Science, Technology and Society, helped found a pre-engineering program at the Miller School, a private college preparatory school in western Albemarle County for students in grades eight through 12. It utilizes existing facilities, such as a woodworking studio, to forge a connection between knowledge and hands-on skills, with the hope of introducing students to real-life engineering before college. This concept draws from a New York Times bestseller by Matthew Crawford, a former fellow at U.Va.'s Institute for Advanced Studies in Culture, titled "Shop Class as Soulcraft."

As Neeley explained, many students choose engineering based on the recommendations of guidance counselors and their personal skill sets, without interacting with the physical world - experience that provides a crucial, concrete frame of reference for concepts being described in analytical, theoretical and mathematical ways in their course work.

"If you don't have the experience of working with those things in the world, they're harder to understand and not as meaningful because you don't see why they matter," she said.

She also said she hopes that developing basic skills in a supportive rather than competitive environment will encourage more students who would otherwise not consider themselves engineers toward the field.

Garrick Louis, an associate professor of systems and information engineering, also collaborates with Miller School students. Since 2008, he has been taking research trips every summer to the Ratshitanga all-girls school in Limpopo, South Africa. Starting next year, Miller students will join Louis and a team of students from J.T. Henley Middle School, also in western Albemarle, to design, create and install a cistern system in virtual and in-person collaboration with the South African students who need the facilities.

The project offers students a chance to work through the ups and downs of bringing an engineering concept to reality while simultaneously exposing them to conditions in another culture, Louis said.

"It's an invaluable experience that they'll carry going forward. They won't be able to forget that," he said.

The Engineering School is home to many other outreach efforts by individual professors and groups, including the annual Engineering Open House, Materials Science's "Nano Days" activities  and professor John Bean's creation of a U.Va. Virtual lab site as an online resource for students across the country.

"You should never underestimate what impact engagement with young people can have upon them in a positive or a negative way," Groves said.

"You have to be careful about assuming that they know what goes on at the University of Virginia," he added. "After a while, bits of knowledge may be second nature to you or me, but to a young person that hasn't had a connection, these sorts of outreach efforts can have a very good impact on getting students to think about the discipline, but also about the specific school."

A Year We Will Never Forget: 2019-20 in Review END_OF_DOCUMENT_TOKEN_TO_BE_REPLACED

‘What Will You Carry With You?’ Remarks From UVA President Jim Ryan END_OF_DOCUMENT_TOKEN_TO_BE_REPLACED