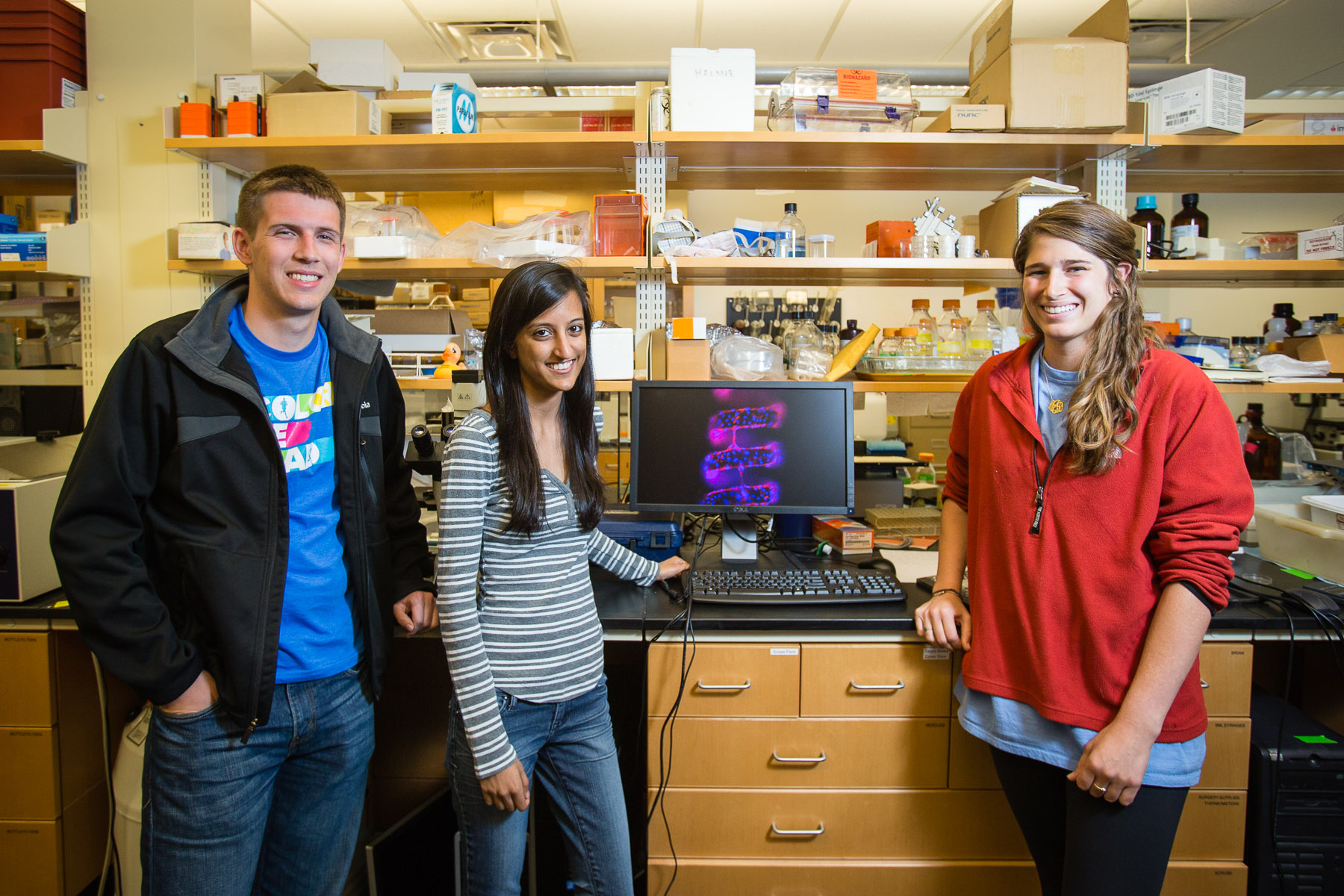 For their engineering capstone project, three University of Virginia undergraduate students are researching new design approaches for coils used to treat aneurysms in the brain.

Fourth-year biomedical engineering students Brian Griffin, of Alexandria; Molly Jenner, of Houston; and Shipra Maheshwari, of Fairfax Station, received an undergraduate research grant from Human Focused Testing, a commercial research-assistance firm, to develop a model that will enable, for the first time, in vitro testing of the effects of coil design and aneurysm geometry on cellular responses to coil embolization. The students are working in collaboration with Brian Helmke, associate professor of biomedical engineering in U.Va.’s School of Engineering and Applied Science, and Dr. Avery Evans, professor of radiology, neurology and neurological surgery in the School of Medicine.

An estimated 10 million to 12 million people in the United States have cerebral aneurysms, and 20 percent to 50 percent of these rupture during the patient’s lifetime. For 45 percent of patients, a ruptured aneurysm is fatal in the first 30 days after it occurs.

“This research has the potential to directly impact clinical care,” Helmke said. “The endovascular coil technology currently used for treating brain aneurysms is essentially unchanged since the early 1990s. when coils were first introduced. Potential improvements in designs and materials used have failed clinically, in part because a method for following healing in real time in a patient doesn’t exist, so we don’t understand mechanisms of failure.

“Brian, Molly and Shipra are developing a realistic method for assessing living cell behavior so that we can understand why some coil designs perform better than others, and, more importantly, so that we can optimize new coil designs without risking patients or animals.”

For Griffin, the research holds a personal interest, as he is one of the millions of Americans with a cerebral aneurysm.

“Two years ago, in spring of my second year, I was hospitalized with a cerebral aneurysm that had burst,” he said. “I was in the U.Va. Hospital for about a month and personally experienced these techniques and treatments.” Evans, now one of his advisers, performed the coil embolization procedure that Griffin is now seeking to improve.

“When I saw that there was a project on aneurysm coiling, I took it as a sign that I should do my best and that I should give back to the community that had helped me so much,” he said. “Since it is a very personal thing and I have had this experience, it’s given me motivation to come to some sort of concrete result that can help other people and patients that are in the position that I was in. As my doctors said, I was one of the lucky ones.”

“There are two ways of fixing aneurysms,” explained his fellow student researcher Jenner, “clipping, which is invasive, or coiling, which is less invasive.”

During endovascular coiling, the physician threads a microcatheter through the femoral artery in the patient’s leg to the site of the aneurysm. A soft platinum wire is then expelled from the catheter into the aneurysm sac to form a packed coil ball. The coil acts as a barrier to reduce pressure on the aneurysm walls, thereby decreasing risk of rupture. By packing filling coils into the aneurysm space, the flow of blood into the aneurysm is slowed or stopped, triggering blood clotting and encouraging the body’s natural wound-healing response.

Incomplete healing leads to aneurysm recurrence in about 20 percent to 30 percent of patients, resulting in the need for either a second coil embolization or the more invasive surgical “clipping” procedure that requires a craniotomy, or opening of the skull. Thus, there is a crucial need for improvement in coil technology.

“The process is very complicated and these models don’t allow us to monitor the healing process in real time, and so there’s a lack of understanding and research,” Griffin said. The in vitro model allows the students to observe the cellular behavior in real time and to compare how different coil geometries affect the healing rate.

First, they extract platelets from blood samples and put them on the three different in vitro models: a glass control, a smooth coil design, and a ribbon coil design. Next they add endothelial cells, the type of cells that line blood vessels. Over the course of a week, they observe how the clots form and the cells grow on the coil geometries.

“We’ve been measuring the clotting response, specifically the fiber matrix from blood platelets that forms clots and helps the vessel to heal,” Griffin said. “The matrix acts as a scaffold that cells can grow on, and the stronger the scaffold, the better and easier a vessel heals..

“The amounts of cells that grow on them don’t vary, but the noticeable difference that we’ve seen has been the frequency and characteristics of bridging, or cells spanning across the space or spirals of the coil,” he said.

Griffin, Jenner, and Maheshwari are hoping to publish their findings in the biomedical engineering journal Cardiovascular Engineering and Technology and will present their research May 7 at the U.Va. Capstone Symposium.

After graduation, Griffin plans to continue biomedical research through an interdisciplinary master’s program at the Virginia Commonwealth University School of Medicine. Jenner has taken a position as clinical research coordinator at Baylor College of Medicine in Houston and plans to apply to medical school for the following year, while Maheshwari hopes to do more research in the biomedical field and gain clinical experience for a year before also going to medical school.

“There is still a lot more research to be done,” Jenner said. “But you have to start somewhere and no one else has started here before. There’s a lot more to explore, and hopefully our research will be a steppingstone to more research.”

“We hope that by creating an easier model for aneurysm geometry, more research will be done and that healing can be monitored more easily, which in turn will produce better treatments,” Griffin said.

Fall Is in the Air on Grounds END_OF_DOCUMENT_TOKEN_TO_BE_REPLACED