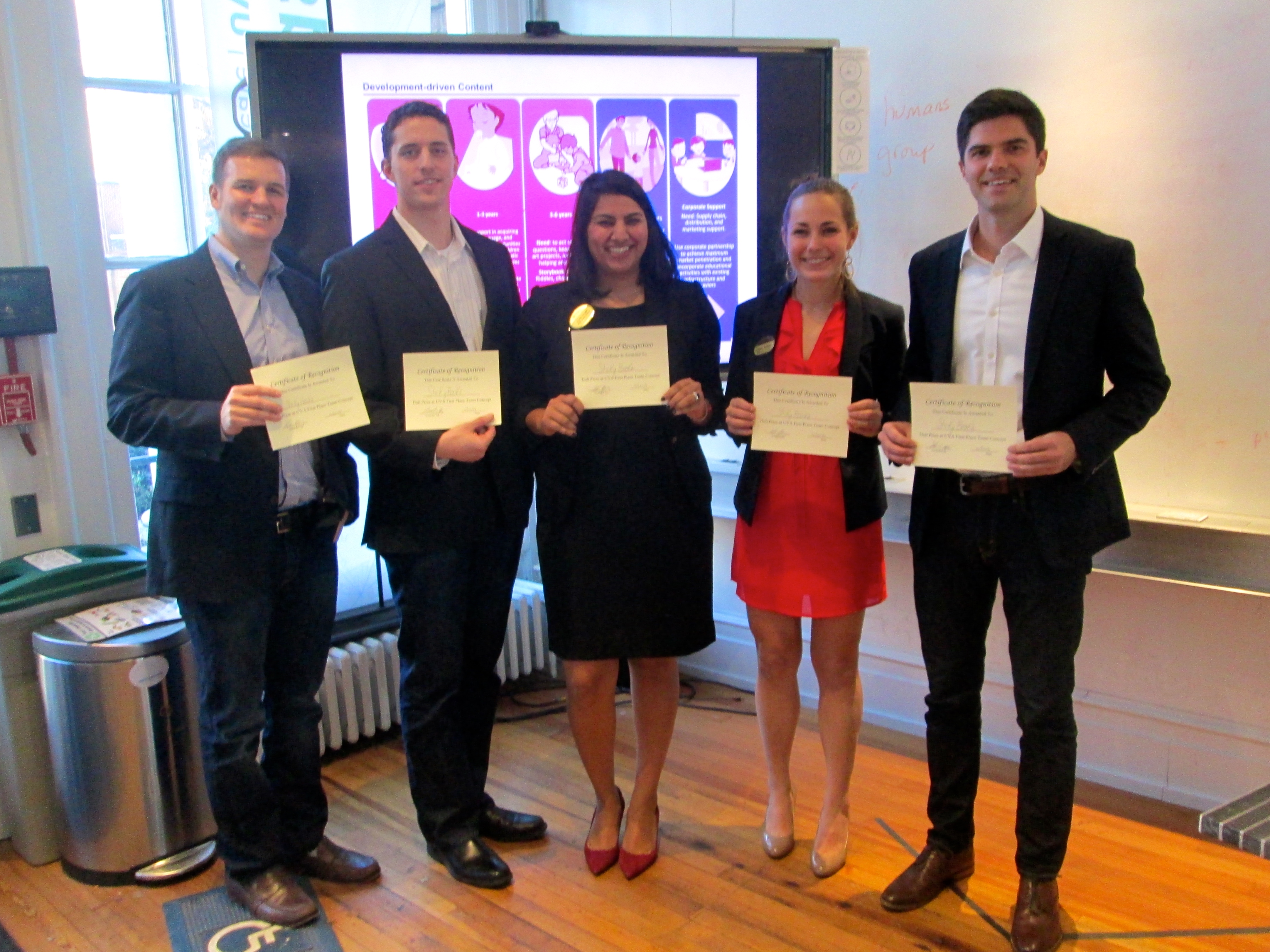 Today around the world, 112 million children ages 6 and under live in slums and lack access to basic education. That’s a statistic that a University of Virginia Darden School of Business team will work to change as it advances to the regional final of the Clinton Global Initiative’s Hult Prize competition, which held its first-ever contest at U.Va. on Saturday.

The Hult Prize is a $1 million global competition that invites university student teams to brainstorm ideas to combat some of the world’s pressing problems. Dubbed “The Nobel Prize for students” by Mohammad Yunus, himself a Nobel Peace Prize laureate, the annual competition aims to launch the most compelling social business ideas: start-up enterprises that tackle issues faced by billions of people.

This year’s prompt challenged students to come up with a solution to tackle the lack of educational resources for young children living in impoverished areas around the world.

Darden teammates Anshu Gupta, Ellen Miller, Dan Garcia, Trent Murphey and Travis Dezendorf won the contest for their idea, “StickyBooks,” a collection of small children’s storybooks that can stick to the back of the laundry detergent packets commonly found throughout urban slums in the world.

“There is a gross lack of educational materials in urban slums, and we need something quickly scalable and sustainable,” said Miller, a first-year Darden student who has worked as a Peace Corps volunteer in Madagascar and as a teacher in India. Nearly all of the team’s students had seen these packets while working in urban slums across the world, and they reasoned that these small soap packets, designed for the bottom-of-the-pyramid consumer, could reach children who aren’t attending school – because they’re at home doing chores like laundry.

Exposing them to engaging, development-driven pictures and tasks designed to engage both young children and their older siblings who may be taking care of them would inspire imagination and spur intellectual growth, important first steps in tackling early childhood development problems, said Gupta, also a first-year Darden student.

By partnering with businesses that distribute these soap packets, these storybooks are a simple, economically viable way to reach millions of children.

“We were so incredibly happy to win the Hult Prize at U.Va.,” Gupta said. “We feel privileged to be a part of such a meaningful competition, and are excited to go to the next round in Boston!”

“Education is an issue that I think affects everybody, everywhere in the world. Developing and developed nations struggle with it,” said Heather Berg, a fourth-year student in U.Va.’s Frank Batten School of Leadership and Public Policy who brought the Hult Prize to U.Va.

“One of the things I love about U.Va is that students have the motivation to really put a lot of time, effort and passion into what they care about,” Berg said. “And I think one of the most misunderstood parts of entrepreneurship is that you have to be a certain person or think a certain way. But it comes down to this: Is there something you really care about, and do you have a way to solve that issue that isn’t being tried? And I think U.Va can be a really great school to get people to think about that.”

Students from Darden, the McIntire School of Commerce, the Curry School of Education, the Batten School, the College of Arts & Sciences and the School of Engineering and Applied Science participated in the competition, reflecting the organizers’ goal of bringing bright minds from across the disciplines together to tackle a pressing world problem.

The “StickyBooks” team will travel to Boston in March to represent U.Va in the regional final. Six regional winners advance to a final “pitch-off,” to be held at September’s Clinton Global Initiative annual meeting in New York, and are invited to participate in the Hult Accelerator, an intensive program held at Hult International Business School in Boston each summer. The overall winner receives a $1 million prize, donated by the Hult family.

What it Means to Be a Cavalier Baseball Player END_OF_DOCUMENT_TOKEN_TO_BE_REPLACED