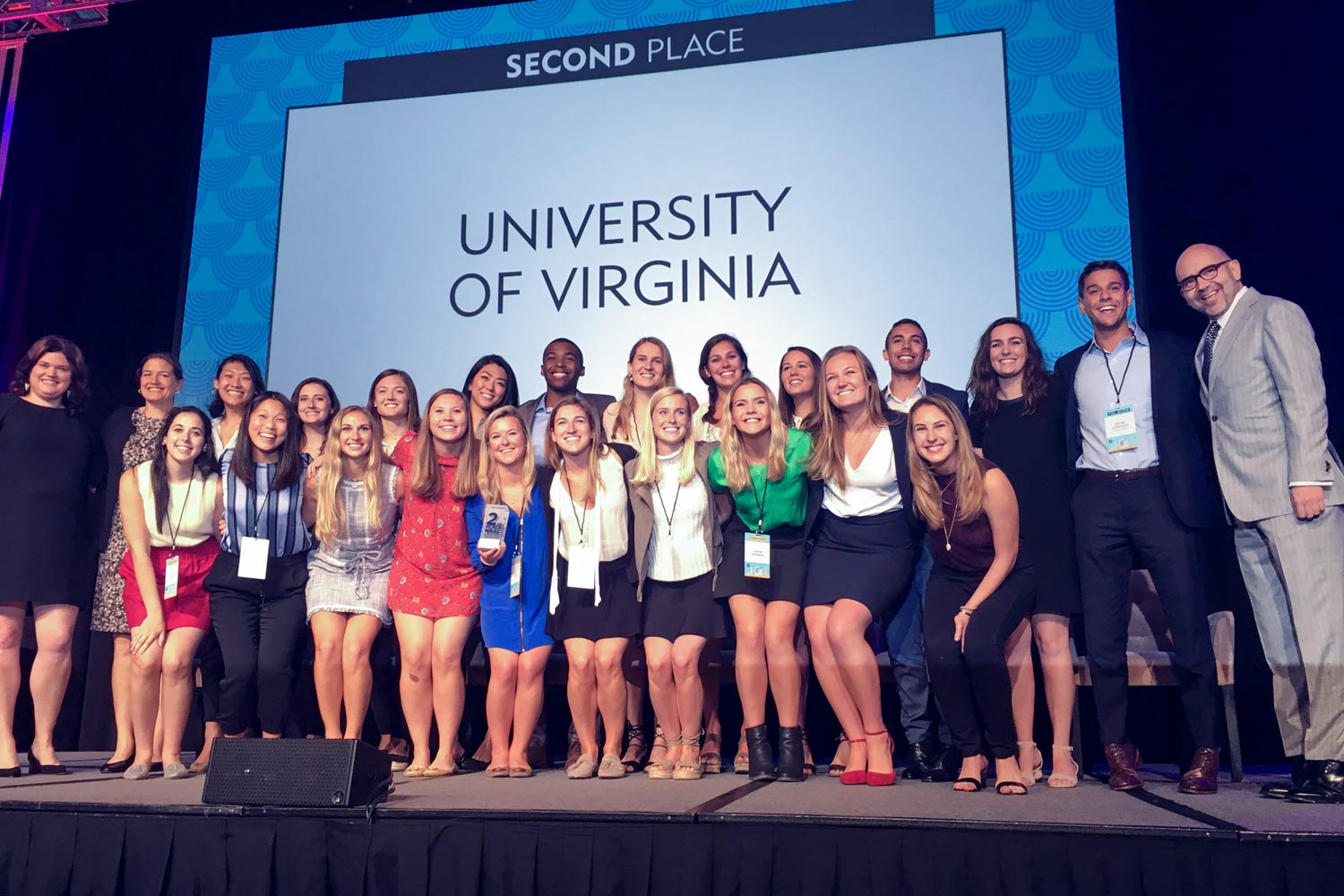 The “Promotions” course in the University of Virginia’s McIntire School of Commerce, taught by marketing professor Carrie Heilman, capped a memorable academic year with a second-place finish at the American Advertising Federation’s National Student Advertising Competition Finals, held June 7 to 9 in Chicago.

Besting more than 150 schools to advance past the district and semifinal rounds, the UVA team joined seven other institutions at nationals on the strength of its successful “Tart Takeover” campaign for cranberry juice maker Ocean Spray. Judged by two company executives, along with representatives from advertising agencies Energy BBDO, Leo Burnett and Digitas, Heilman’s group received the highest score for its presentation, but Syracuse University earned the top spot overall by a slim two points.

This year’s “Promotions” course included 27 students from McIntire and other schools across the University. The experiential nature of the course allowed students to take a deep dive into market research over the course of two semesters, employing focus groups, surveys, interviews, concept testing and brand strategy. As students develop a set of marketing and advertising recommendations that accomplish business objectives, Heilman said, they also “learn to push themselves beyond what they thought they were capable of, not to settle for mediocrity, and about the rewards of working together as a team for a common goal.”

Co-account executive Alexandria Wang, a May graduate of the Commerce School, found the course and the competition to be instructive in myriad ways.

“The ‘Promotions’ class not only gave me a solid foundation for understanding the marketing industry, but also showed me the importance of teamwork, diversity of thought, and commitment,” she said. “My classmates’ skills were impressive, and I truly learned from them. Going to nationals was such an honor, and it was exciting to see how other schools approached the challenge.”

The UVA team’s yearlong, fully integrated marketing approach set them apart with “a funny, lighthearted campaign that poked fun at the ways in which millennials latch on to all kinds of trends, especially food trends,” explained co-account executive Anna Ferrell, another May McIntire graduate.

“We positioned the brand’s unique cranberry taste as an exaggerated obsession,” said presentation team member and May graduate Leigh Engel, an Echols interdisciplinary major in media studies, English and history. “Our video spot has newscasters floored by the overnight popularity of the cranberry, Ocean Spray’s bog farmer is declared the next ‘Bachelor’ and a mini ‘Museum of Modern Tart’ launches in New York City.”

Despite her class coming just shy of taking first place, Heilman said she was proud of her team’s efforts.

“I couldn’t be happier for this talented group of recent graduates,” she said. “They worked extremely hard all year on this Ocean Spray campaign, and it is gratifying for their work to be validated by a panel of professional judges. I am so excited to see what these students will accomplish in the future and wish them all the best.”

The whirlwind trip to the final competition served as the “Promotions” team’s ultimate – and perhaps most bittersweet – UVA experience as students before beginning the next stage of their lives.

“It was easily the most rewarding and intense experience I had in my time at UVA,” Ferrell said. “Being at nationals was especially satisfying because it validates the work we’ve done over the course of an entire year and allowed us to see how it stacked up against the best ideas in the country. We were also able to spend one last weekend together in a beautiful city before heading off to our new chapters.

“Placing so highly in the competition just made it that much better.”

How a Single Email Changed a Life END_OF_DOCUMENT_TOKEN_TO_BE_REPLACED

Fall Is in the Air on Grounds END_OF_DOCUMENT_TOKEN_TO_BE_REPLACED

At UVA, There Is a Club for Everyone END_OF_DOCUMENT_TOKEN_TO_BE_REPLACED