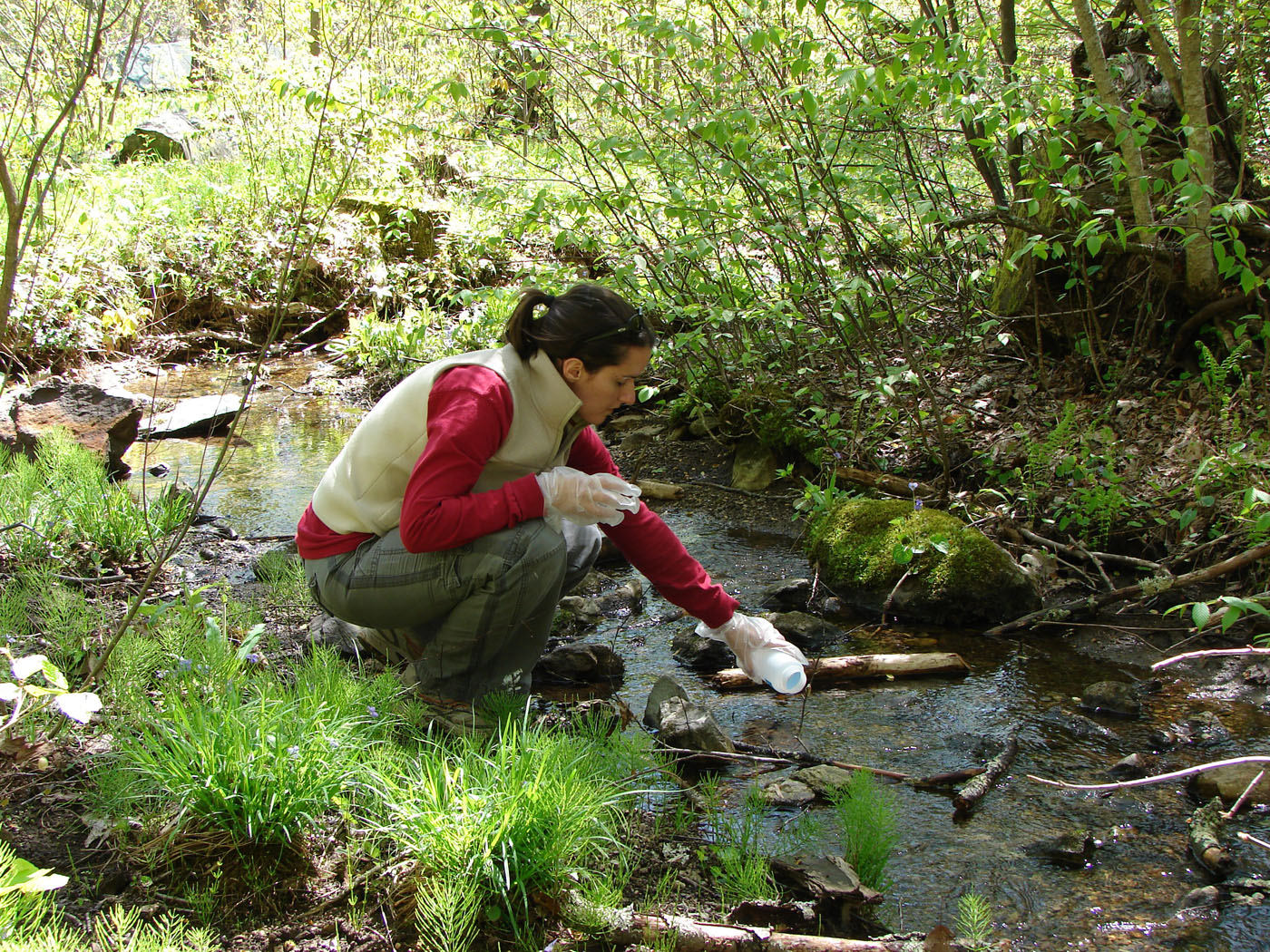 May 5, 2010 — "I've found a tree tag," Larry Kertcher shouts from the rocky bed of Mill Prong, a feeder creek of the Rapidan River in Shenandoah National Park.

"All right!" Jason Lynch calls back.

Lynch hurries down from a fire road to the area where Kertcher is standing. The tree – tag number 712 – marks the location of a stream sampling site.

Lynch puts on a pair of thin plastic gloves and removes a plastic bottle from a small ice-filled cooler. He rinses out the bottle a few times in the stream, then collects a sample from the clear flowing water. He caps it, being careful not to contaminate the sample, and puts it in the cooler.

They are participating as volunteer water sample collectors in the Virginia Trout Stream Sensitivity Study, one of the nation's largest and most comprehensive long-term stream chemistry surveys. The study, overseen by the University of Virginia, is designed to track the effects of acidic deposition (often called "acid rain") and other factors that affect water quality and related ecological conditions in Virginia's native trout streams.

"This is an opportunity for us to get out from our offices and into the field; to actually collect some of the samples that make up the data we study," Lynch says.

The samples will be analyzed at U.Va. for pH, a stream's ability to neutralize acidity, and for dissolved ions.

Last week more than 200 volunteers, organized by U.Va.'s Environmental Sciences Department (part of the College and Graduate School of Arts & Sciences) and the conservation organization Trout Unlimited, sampled about 450 stream sites in 34 Virginia counties, representing about 80 percent of the forested mountain headwater streams in the state that support reproducing brook trout.

This information helps scientists determine the health of headwater streams throughout western Virginia. The data and findings are used by the EPA and other national and state agencies for resource management and to develop, evaluate and recommend national air pollution control policies.

Brook trout, the only native trout in Virginia and the eastern United States, is of particular interest to anglers and ecologists. They require cool clean water and are highly susceptible to pollution, including acidity deposited from the air.

This is the third regional survey conducted by U.Va. and Trout Unlimited. Previous surveys were done in 1987 and 2000. The current plan is to continue long-term monitoring by conducting surveys every 10 years.

Lynch, Kertcher and their colleagues Colleen Mason and Kyle Campbell, could not have picked a more beautiful day to get outside. The air is cool and clear, the sky baby blue, the sun shining intensely through newly leafing trees. Their sampling sites, immediately above President Herbert Hoover's Depression-era Camp Rapidan, seem pristine.

But even clear flowing water deep within a national park is not necessarily unpolluted, attests Rick Webb, the U.Va. environmental scientist who coordinates the study.

"Our long-term findings show that acid from coal-burning power plants and other sources can adversely affect stream life in protected areas even hundreds of miles from pollution sources," he says.

Due to prevailing winds that carry pollution from coal-burning power plants – primarily sulfur dioxide and nitrogen oxides – many mountain streams and forests in Virginia and throughout the Southeast are undergoing long-term damage.

"There's kind of an irony here," Webb says. "Streams that have been set aside for preservation are being subjected to the harmful effects of air pollution, which, unfortunately, is a product of our modern lifestyle."

As streams become more acidic, many species of fish and aquatic insects become stressed and can die or become incapable of reproducing. Studies show that acidic streams have fewer species of fish and insects, smaller populations of these creatures, and in some cases unsustainable or even extinct populations.

A given stream's level of susceptibility to acidification is affected by its bedrock composition and the chemistry of nearby soils. Streams with sandstone or quartzite bedrock – about one-third to one-half of the native trout watersheds in Virginia – are most vulnerable to increasing levels of acid deposition because they cannot neutralize acid even years after pollution has been reduced.

"The long-term nature of the Virginia Trout Stream Sensitivity Study helps us to make sound policy decisions based directly on what actually is occurring over time in the environment," Kertcher says.

Change in the chemistry of small headwater streams provides an indication of ecological change throughout a region. Webb says that despite decreases in acid-forming emissions since the enactment of amendments to the Clean Air Act in 1990, stream acidification continues in western Virginia.

"We've got sort of mixed results," he says. "Some of the streams in Virginia are showing some signs of recovery, some are not. Some streams probably never will recover to the state that they were prior to the industrial era, but, fortunately, many will show some recovery in response to reductions of air pollution.

"Native brook trout and the mountain streams they inhabit are important symbols of what remains of the natural world," Webb says. "It's a measure of this importance that so many volunteers have come forward this time and over the years to help us collect the data needed to protect these fish and the streams they live in."

Netflix to Add Ads. Why This Could Be a ‘Game-Changer’ for Your Viewing Experience END_OF_DOCUMENT_TOKEN_TO_BE_REPLACED

What’s Next for UVA’s Class of 2022? END_OF_DOCUMENT_TOKEN_TO_BE_REPLACED