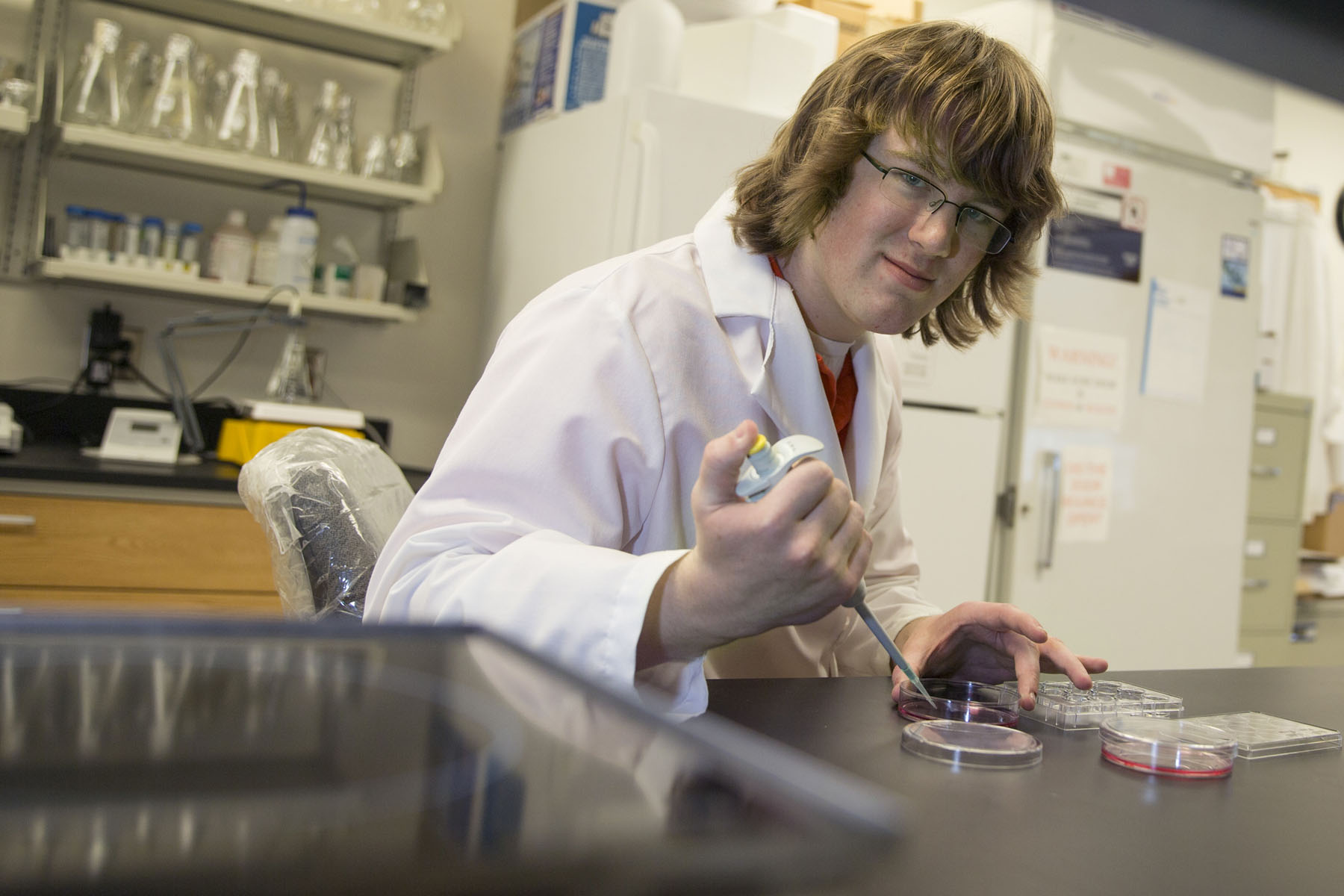 The Arnold and Mabel Beckman Foundation scholarships will go to Christopher Waters, 21, of Danville, a third-year student; and to Catherine Henry, 19, of Great Falls and Rachel Stadler, 20, of Poquoson, both second-year students. All three are biomedical engineering majors in the School of Engineering and Applied Science.

U.Va. was one of 10 universities to receive a Beckman Scholars Award from the foundation in 2013. U.Va. was selected largely because of the quality of its scholars and the University’s approach to mentoring and training, said William Guilford, an associate professor of biomedical engineering.

The University’s award, worth approximately $120,000 over three years, provides scholarships for two undergraduate researchers per year who are working in chemistry, biochemistry and the biological and medical sciences. The scholars are selected locally and the funds provide each undergraduate researcher with $19,300 in salary and travel for two summers and one academic year. The Office of the Vice President for Research and the dean’s offices of the College of Arts & Sciences and the Engineering School fund a third scholar each year.

Henry is researching the structural differences between healthy and unhealthy diaphragms –  a layer of muscle at the base of the rib cage that helps draw air into the lungs – and how the aging process compounds the adverse structural adaptions found in dystrophic diaphragms. The research may help in disease treatment ­– particularly Duchenne muscular dystrophy, whose victims suffer progressive muscle degeneration and weakness caused by an absence of dystrophin, a protein that helps keep muscle cells intact. Symptoms tend to manifest between ages 3 and 5.

“There is a dire need for new treatments for Duchenne muscular dystrophy,” she said, “People afflicted with DMD die in their early 20s from either respiratory or cardiac failure. The current treatment only mitigates some of the symptoms and, ultimately, results in more health problems.

“By learning more about how the disease affects the diaphragm, more effective treatments can be created that prevent respiratory failure and improve the length and quality of life of DMD patients.”

Shayn Peirce-Cottler, an associate professor of biomedical engineering, described Henry as a student who “naturally gravitates to the lab and absolutely loves doing research.”

Henry has also been spearheading a collaboration between Peirce-Cottler’s laboratory and that of Silvia Blemker, another associate professor of biomedical engineering.

“Catherine has demonstrated tremendous enthusiasm for research, tireless dedication to moving her project forward and early signs of possessing both the intellectual horsepower and the innate curiosity and critical thinking skills necessary for excelling in research,” Peirce-Cottler said.

Waters’ research involves measuring pulses of insulin within a range of glucose levels. Under normal circumstances, beta cells in the pancreas secrete pulses of insulin at around five-minute intervals. These pulses are larger after meals and smaller at night or during fasting. There is a range of glucose levels that permit these pulses to occur. When glucose goes too low, beta cells “turn off”; when glucose is too high, insulin is released with tiny irregular pulses. Type 2 diabetes is associated with these tiny and irregular insulin pulses. While most previous therapies sought to increase the size, number or insulin secretion from beta cells in each islet, Waters’ data suggests to get optimal performance, islets in a diabetic environment should be made less responsive to glucose, not more.

“Diabetic islets overreact to blood sugar levels, and the goal of our research is to identify the mechanism behind the overreaction and produce a therapeutic cure to return the islets to healthy levels,” Waters said.

The Beckman funding will allow Waters to remain in Charlottesville to pursue his research over the summer.

“It also allows me a chance to interact with others at the Beckman Symposium, which will open me to new research being done by other undergraduate researchers,” he said. “I feel extremely honored for having been selected this year, and I’m looking forward to meeting and interacting with other scholars in the coming year.”

“Chris is enthusiastic, friendly, hard-working and also has a laid-back demeanor,” said Craig Nunemaker, an assistant professor in the Department of Medicine, Endocrinology and Metabolism. “He’s volunteered a lot of his time on this project with no compensation. This award will enable him to really engage in his project at a much higher level because he’ll be able to dedicate his full summers to his project.”

Stadler’s research revolves around infectious diseases, particularly “toxoplasma gondii,” pathogenic parasites that are a leading cause of death attributed to foodborne illness and are linked to malaria.

“My goal is to understand how the parasite moves so that it can be prevented from infection,” Stadler said. “Because of its close relationship to malaria, my work may also lead to a better understanding of a broader preventative measure for the family of broadly infectious pathogens. I love the challenge of working with toxoplasma.”

William Guilford, an associate professor of biomedical engineering and Stadler’s mentor, said that her work is exceptional.

“Hers is a first-ever look into the motile inner workings of the parasite toxoplasma, a disease-causing organism whose close cousin causes malaria,” he said. “She is observing single molecular motors inside living parasites to understand how they are able to propel toxoplasma into human cells, where it divides and hides. There is no doubt that her work will make a splash in two scientific fields – infectious disease and cell motility.”

Guilford said he enjoys working with Stadler. “She is at once tireless and resolute, yet gregarious and fun-loving,” he said.

Henry, who plans to pursue a medical degree and a Ph.D. in biomedical engineering, is a Rodman Scholar and a Harrison Undergraduate Research Award recipient. She is on the dean’s list and a member of the Cavalier Marching Band. She is also a student researcher in Peirce-Cottler’s laboratory investigating dye usage in the detection of abrasions on rape victims with different skin tones, and was a student clerk intern/researcher at the Nuclear Medicine and Radiology Departments at the University of Iowa under Dr. Michael M. Graham, where she wrote two papers that are in the process of being submitted to journals. She is also a member of the Wahoo Wizards, a volunteer group that performs experiments for elementary school students to educate and motivate them to pursue science, math and engineering. She volunteers for the Jeremiah Project, a middle school camp with a mission to build and repair houses in poor rural communities.

Stadler is a member of the Cavalier Marching Band and Kappa Kappa Psi, the national honorary band service fraternity. She presented her research on “toxoplasma gondii” at the Biophysical Society Annual Conference in San Francisco. She wants to pursue a Ph.D. in infectious diseases and work with the World Health Organization or the Centers for Disease Control and Prevention.

Waters, a Rodman Scholar, plans to pursue a Ph.D.

A Year We Will Never Forget: 2019-20 in Review END_OF_DOCUMENT_TOKEN_TO_BE_REPLACED

‘What Will You Carry With You?’ Remarks From UVA President Jim Ryan END_OF_DOCUMENT_TOKEN_TO_BE_REPLACED