At U.Va., Warner Stumps for Bipartisan Solution to National Debt 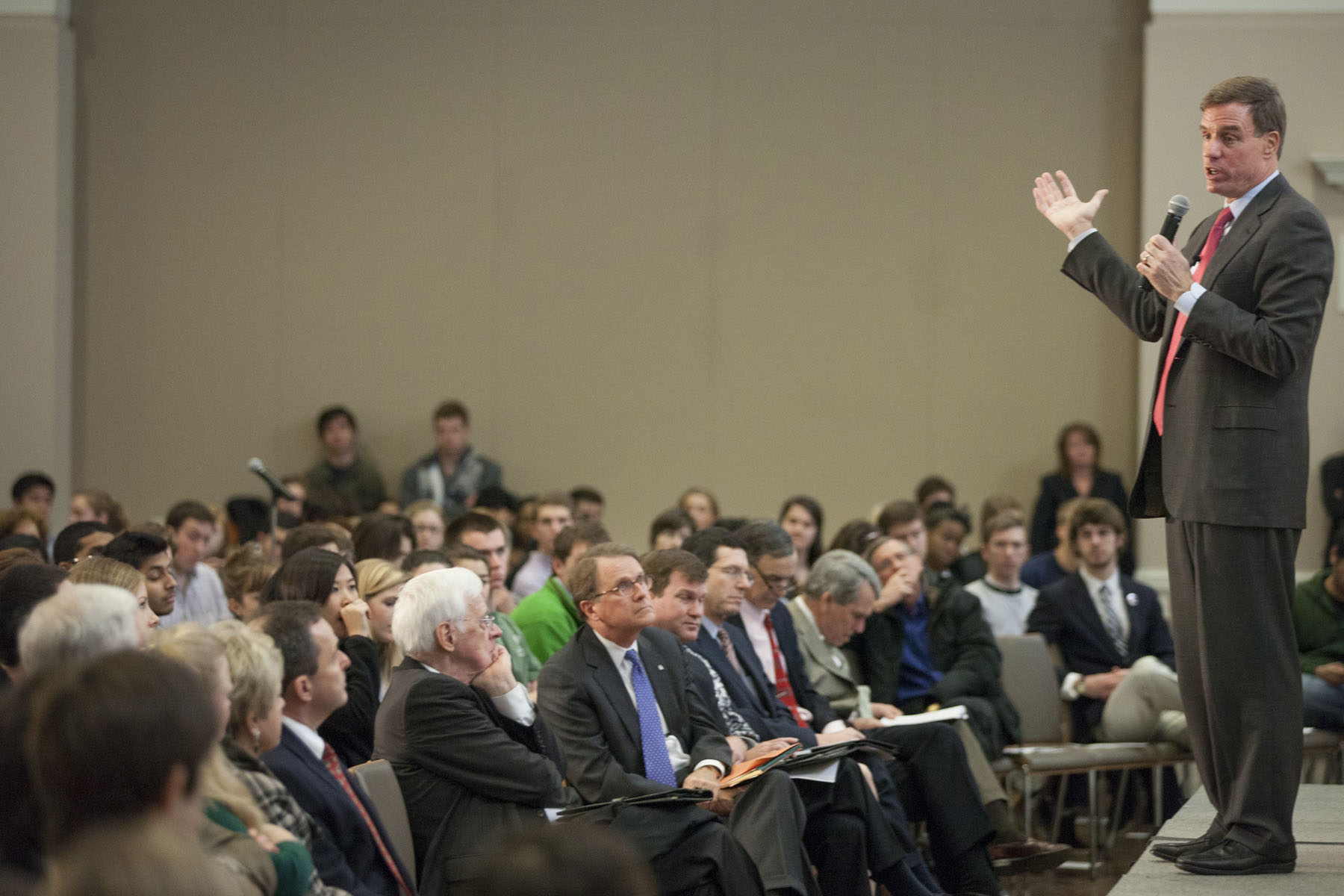 Solving the federal government’s long-term debt problem is possible, but requires bipartisan compromise and public support for lawmakers willing to move to the political center to get the job done, U.S. Sen. Mark Warner (D-Va.) said Monday at the University of Virginia.

The U.Va. branch of Up to Us, a national initiative in which student teams from 11 colleges and universities are competing to educate their peers on the federal debt, organized Warner’s visit.

About 500 people, most of them students, attended the presentation in the Newcomb Hall Ballroom. U.Va. President Teresa A. Sullivan introduced Warner, praising the lawmaker for his willingness to engage colleagues outside his own party.

“Senator Warner is known for his efforts, in a decidedly partisan era, to work across the aisle in bipartisan coalitions,” Sullivan said. “We applaud him for this.”

Warner, who was part of the so-called “Gang of Six” – a group of senators who sought a bipartisan solution during recent fights over debt and taxes – said the federal government’s long-term debt is the most important issue facing the nation.

“It’s important not only for the economic reasons I’m going to lay out for you, but because in many ways, as President Sullivan mentioned, where I work is a pretty challenging place these days,” Warner said Monday. “And many Americans are starting to wonder whether our political institutions can work in the 21st century.”

Fixing the nation’s balance sheet is also a prerequisite for tackling other impending issues, such as immigration and energy policy, he said. Failure to act will lead to an explosion of debt in coming years and will require massive expense just to pay the interest, Warner said.

Though the recent economic downturn intensified the partisan divide over federal spending, the senator noted that the national debt has been a recurring political issue over much of the past century. The federal government has operated at a deficit in 70 of the past 75 years.

“Both sides have got the blame on their hands,” he said.

Warner attributed the country’s current $16.5 trillion deficit to a combination of the Bush-era tax cuts, a doubling of defense spending in recent years, the cost of the wars in Iraq and Afghanistan, the creation of the Department of Homeland Security, the prescription drug benefit, and increased longevity in the population. None of those issues, including the Bush tax cuts, were passed without bipartisan support, he said.

The good news, Warner said, is that the country doesn’t have to solve the entire debt problem immediately. He said lawmakers should shoot to trim a minimum of $4 trillion off the debt in the next decade.

“We’ve got to show the market and the world that we recognize this is a problem,” Warner said.

Meeting that goal would require that lawmakers from both parties take positions that are unpopular with their political bases. Republicans would need to accede to revenue increases beyond those they have accepted in previous debt negotiations, and Democrats would need to embrace meaningful entitlement reform, he said.

There has already been some progress, he said, citing about $2 trillion trimmed from long-term debt forecasts as a result of recent deals during the fiscal cliff negotiations and during the debt-ceiling arguments in 2011. But a real solution to the deficit requires more than just raising taxes and cutting spending, he said. It also requires putting policies in place that encourage future economic growth.

Going forward, he encouraged students and others to put practical solutions before political affiliation. For partisans, that might mean supporting a politician from the other party who has shown willingness to compromise and sacrifice on these issues.

Warner also predicted that the U.S. economy is on the brink of a robust recovery. He said the housing market has pent-up demand, and that good policy could help usher in a period of rapid economic growth.

“The only thing that can hold us back is if our elected leadership doesn’t do what is expected of them,” he said.

Organizers of the U.Va. event said they were pleased with the robust turnout and Warner’s presentation.

“We were really excited to see that number of our peers engaged in an issue that is not necessarily the most interesting or the sexiest on Grounds, but is something that affects our entire generation and one we need to deal with,” fourth-year student Alan Safferson said. “It was great to see the representation from around Grounds, from all of the schools as well as the University community and the Charlottesville community.”

For All of Us END_OF_DOCUMENT_TOKEN_TO_BE_REPLACED