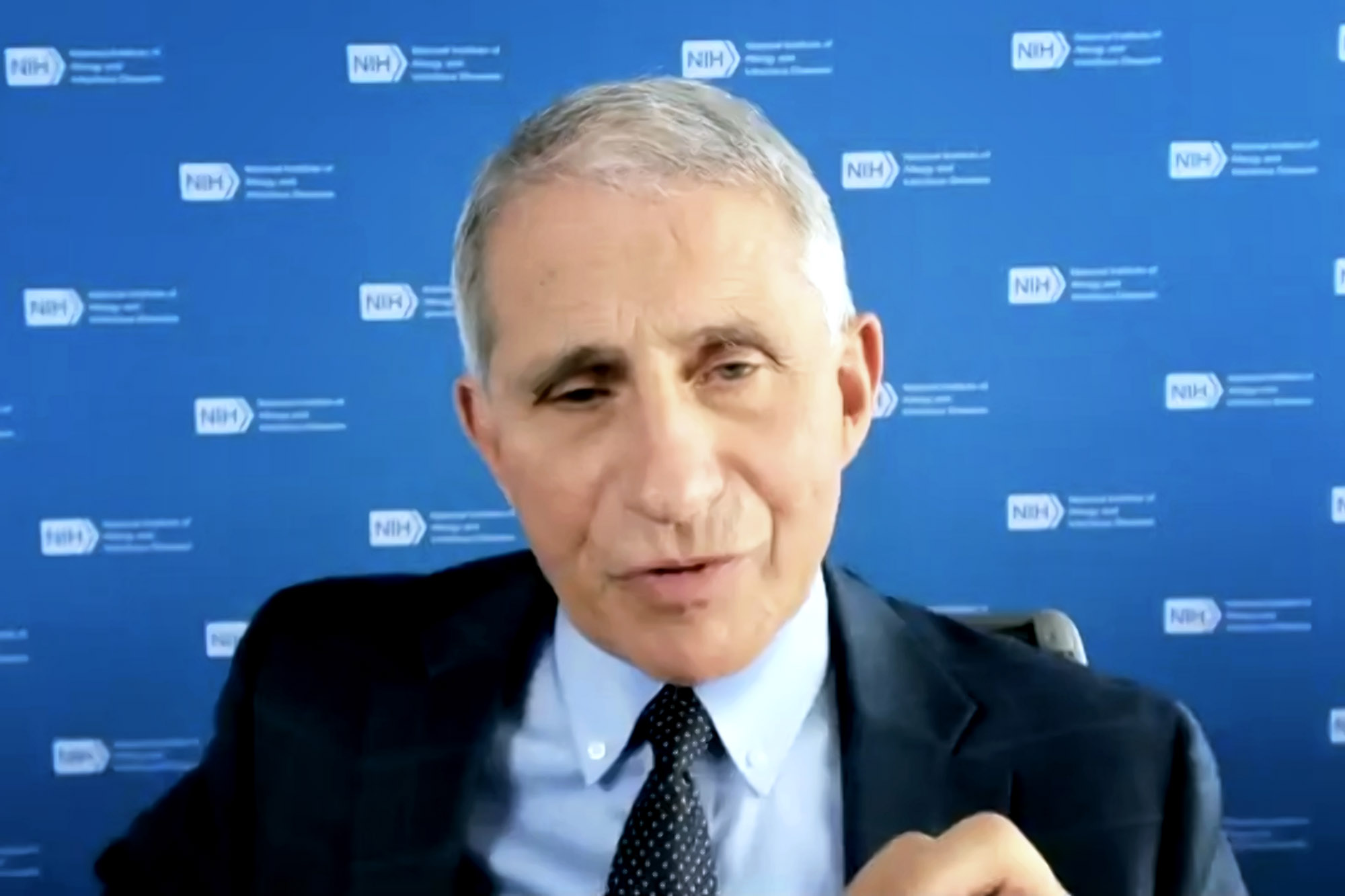 The United States is among the worst-hit countries in a pandemic that has “exploded upon our planet to be the worst outbreak of respiratory infection in 102 years, since the 1918 Spanish Flu,” Dr. Anthony Fauci said Wednesday in a webinar at the University of Virginia.

“As of yesterday, there were 56 million cases and over 1.3 million deaths globally, and unfortunately for us in the U.S., we are the country that was hit the hardest by this outbreak, with more than 11 million cases and now over 245,000 deaths,” Fauci said. “We are in the process of another resurgence as we enter the colder months.”

Fauci, who directs the National Institute of Allergy and Infectious Disease at the National Institutes of Health and has helped lead the nation’s pandemic response, spoke to the University community during a Medical Center Hour webinar. The event was part of a weekly public forum on medicine and society hosted by the Center for Health Humanities and Ethics in the UVA School of Medicine. Fauci gave the annual Hayden-Farr Lecture in Virology and Epidemiology, endowed by professor emeritus Dr. Jack Gwaltney to spotlight current challenges in infectious disease. (A full recording is available on YouTube.)

Speaking to a virtual audience of thousands, Fauci methodically went through what we know about COVID-19, the disease caused by the novel coronavirus that has swept the planet over almost a year. He addressed everything from the history of coronaviruses – including previous outbreaks like SARS in China or MERS in the Middle East – to the symptoms, transmission and progression of COVID-19.

He also spoke about vaccine possibilities, including recent news that two pharmaceutical companies, Pfizer and Moderna, have completed late-stage trials that have shown their vaccine candidates to be approximately 95% effective in fighting the virus. Both companies are expected to apply for emergency use authorization from the U.S. Food and Drug Administration within days.

“This is a very striking efficacy signal, almost identical in two separate studies by two separate companies,” Fauci said, noting especially that the vaccines appeared to be effective in preventing not just mild or moderate disease, but severe disease and hospitalization.

However, he said, a vaccine’s efficacy will ultimately depend not just on scientists, but on the public.

“Whether or not a vaccine is going to be effective in the community depends on whether or not people take the vaccine,” Fauci said, citing a recent survey showing that only 50% of Americans plan to get a vaccine for COVID-19.

“That is going to be the challenge for the future, as we learned lessons from the past and we make sure we don’t lose corporate memory of what we are going through right now.”

Fauci stressed that the approval process for the vaccine is strenuous and independent, conducted by career scientists at the FDA, scientists like himself at the NIH, the Data Safety and Monitoring Board at the NIH, and the Vaccines and Related Biological Products Advisory Committee, which advises the FDA. Leaders at the Centers for Disease Control will manage the distribution of vaccines that are approved.

“All of this is independent and transparent, and yet because of a lot of noise that comes out of Washington, in this divisive time that we are living in, some people may not trust, or may think the vaccine was ‘rushed out,’” he said. “I can tell you this has been an independent decision, done in the classic way that decisions are made about vaccine safety and efficacy.”

The speed, he said, is a result of billions of dollars invested by the federal government and others, and advancing technology that has helped pharmaceutical companies conduct research and testing.

Fauci also emphasized that public health measures – such as wearing a mask, practicing social distancing and avoiding crowded, indoor gatherings – are critically important now, and will continue to be important in the coming months.

“We cannot abandon public health measures, even in the presence of a vaccine,” he said. “It will take a while to get the community completely protected, to establish a veil of protection that truly is herd immunity from this particular infection.”

During the presentation, the public health expert also went over therapeutics being tested against the virus, several of which are part of clinical trials at UVA Health. The drug remdesivir, for example, was tested at UVA as part of a nationwide trial and became the first drug cleared by the FDA to treat COVID-19. Fauci also mentioned trials involving the drug dexamethasone and monoclonal antibodies, both of which are being studied at UVA.

Looking ahead to the Thanksgiving holiday next week, Fauci emphasized that families should keep in mind all that we have learned about the virus so far – that it is largely borne by respiratory droplets, but can also be spread through aerosolized droplets; that indoor spaces with poor ventilation pose a greater risk of spread; and that masks and gathering either virtually or outdoors can help reduce risk.

“Families need to make individual decisions based on those in the family that might be vulnerable, such as the elderly or those with underlying conditions,” he said.

“About 40% of Americans have an underlying condition, and about 30% are obese, with a BMI equal to or greater than 30,” he said. “That is very important.”

Fauci concluded by reflecting on lessons he and his colleagues have learned about the virus so far, including the surprising prevalence of asymptomatic cases – about 40% to 45% of cases – and the virus’ effects on other organ systems, including the heart, the kidneys and the brain, leading to complications including stroke, blood clotting and “brain fog.” The variance of symptoms – from asymptomatic cases to those who are hospitalized or die – has been the most striking thing, he said.

“I have never seen anything like it,” he said. “This is unprecedented, to see a virus that can kill you, and can cause severe mortality and morbidity, and yet so many people have absolutely no symptoms at all.”

Another striking lesson is the “profound” racial and ethnic disparity evident in the virus’ spread, as African American and Latinx people are both more likely to become infected and more likely to experience severe disease because of underlying conditions. Reaching out to those communities and building trust will be important in treating the disease and in distributing a vaccine, Fauci said.

All of the lessons learned in this pandemic will be important for the next outbreak.

“Outbreaks and pandemics have been with us forever, even prior to recorded history. … We’ve experienced outbreaks before and we will continue to,” he said. “The critical issue is that we cannot prevent the emergence of a new microbe, but what we can do is, by our preparedness, prevent that emergence from turning into a pandemic.

“That is going to be the challenge for the future, as we learned lessons from the past and we make sure we don’t lose corporate memory of what we are going through right now.”

A full recording of Fauci’s presentation is available on Medical Center Hour’s YouTube channel. It also aired on C-SPAN.