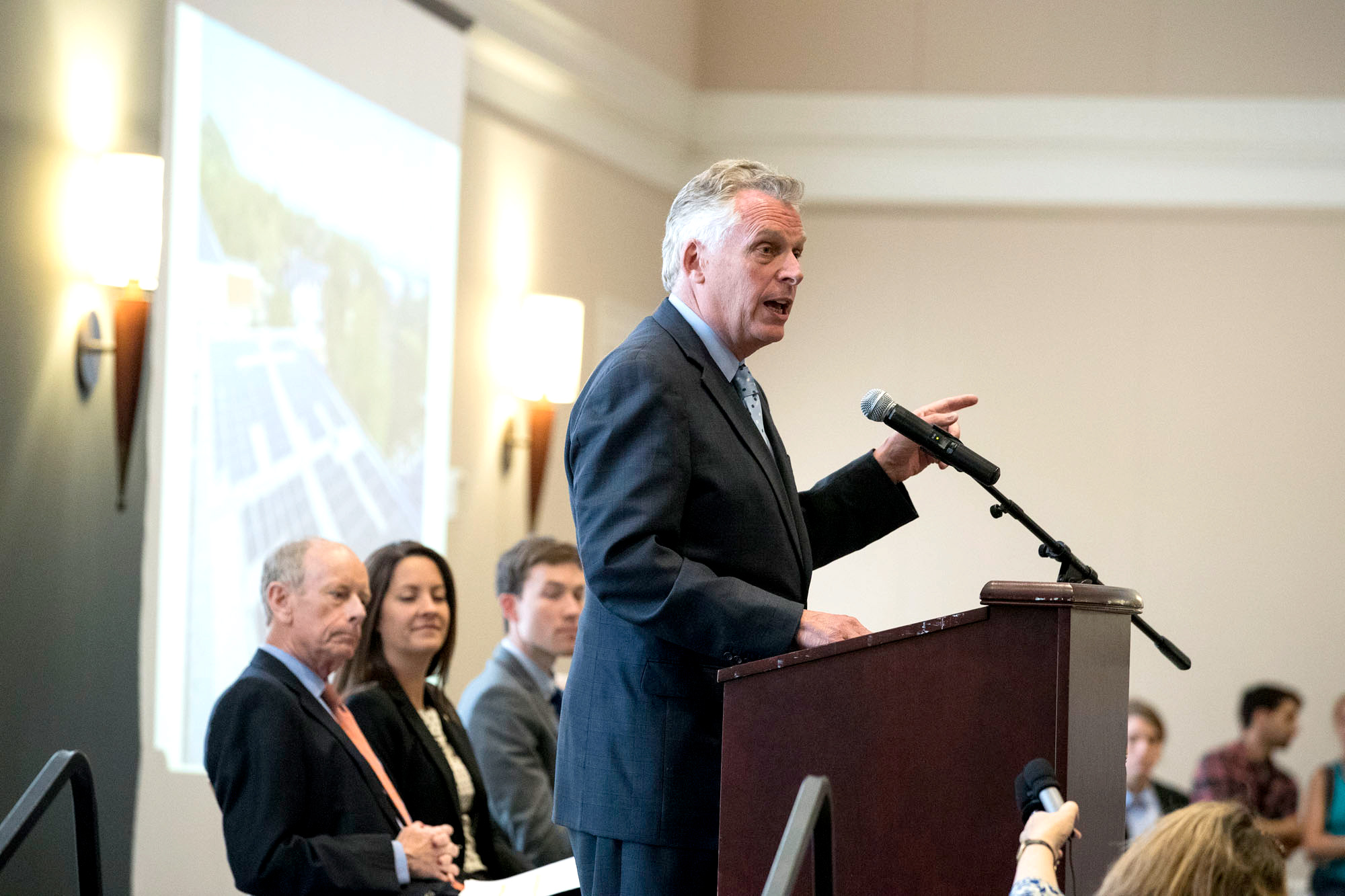 McAuliffe and Hogan were among the dignitaries who participated in the project’s official ribbon-cutting ceremony during an Earth Week Expo at Newcomb Hall Ballroom. Since mid-February, 324 panels, totaling about 7,530 square feet, on the roof of Clemons Library have been producing what will amount to about 199,600 kilowatt hours of electricity per year. This accounts for about 15 percent of the library’s annual electric draw.

Hogan and McAuliffe cut an orange ribbon stretched out in front of a solar panel. “Today marks an important milestone in the University’s work on sustainability, as we dedicate the first UVA-owned, large-scale solar array on Clemons Library,” Hogan said. “Last April, we unveiled a Sustainability Plan, a visionary and comprehensive plan for the next five years that outlines 23 goals and specific milestones along the way. Included in that plan is the greenhouse gas goal, set by the UVA Board of Visitors in 2011, to reduce University-wide greenhouse gas emissions 25 percent below 2009 levels by 2025.

“The theme of this year’s Earth Week at UVA is ‘Awareness to Action,’” he continued. “I hope that each of you learns something new from our community partners and students who are sharing their research immediately following the ribbon-cutting.”

McAuliffe talked about how solar generation had increased in the state during his administration.

“When I came into office, there were 17 megawatts of solar electricity being generated, and now there are 1,600 megawatts either approved or in production now,” McAuliffe said. “And we have gone from 1,600 to 3,500 jobs in the solar industry. That is twice the number of jobs in coal in the state.”

The University worked with Charlottesville-based companies Sun Tribe Solar and Martin Horn Inc. contractors on the Clemons Library project. Taylor Brown, co-founder of Sun Tribe Solar, talked about the importance of having the University at the forefront of the renewable energy movement in Virginia and the encouragement that gives to others.

“To encourage a move to more sustainable practices throughout the state, it is important to shine a light on projects like the one we are celebrating here,” Brown said. “These systems not only provide for a cleaner environment, but also reduce energy costs and provide jobs for the local workforce. We would like to thank everyone who has joined us here today to help celebrate one of the first of many solar projects UVA has planned.”

Suchita Chharia, a UVA global environments and sustainability student, also spoke, saying she has hope for the future because she sees the passion of the students. The University, she said, is a living learning laboratory with a lot of diversity.

Also on Tuesday, University officials unveiled an action plan for reducing UVA’s greenhouse gas emissions to the levels specified by the Board of Visitors in 2011.

To date, UVA has reduced emissions by more than 11 percent since 2009, despite significant growth. The board also agreed, in 2013, to reduce the University’s nitrogen footprint and signed on to the federal Department of Energy’s goals of reducing building energy use by 20 percent below 2010 levels by 2020.

“The UVA community is incredibly supportive of sustainability and active in collectively moving UVA toward a more sustainable future,” Andrea Trimble, UVA’s sustainability director, said. “UVA’s greenhouse gas plan, created with input from dozens of stakeholders, provides a tangible roadmap for even deeper reductions in UVA’s environmental footprint, with a role for virtually everyone at UVA.”

Aside from the Clemons Library solar array, the University has agreed to purchase the entire electricity output generated at a 160-acre Dominion Virginia Power solar farm in Hollyfield, reducing the carbon footprint of the University and the Darden School of Business by about 18,000 metric tons per year.

The University has also leased additional rooftops on Grounds to Dominion for solar arrays feeding into the electric grid. University technicians will continue working on current buildings, improving and updating the controls and systems technologies, performing enhanced maintenance refinement and training, and improving building efficiency.

In research laboratories, where intensive energy use is often required to maintain state-of-the-art equipment, the University will seek to improve and update equipment and make infrastructure modifications to reduce energy use.

The University is also looking into increased efficiencies in its fleet of vehicles and in the University bus system.

Not all the emphasis of the plan is directed at institutional solutions. One part aims to make University employees and students more aware of sustainable practices and programs, so that they can make modifications in their daily routines that could cumulatively add up to a reduction in greenhouse gases.

Some of the activities planned for the remainder of Earth Week are:

A Year We Will Never Forget: 2019-20 in Review END_OF_DOCUMENT_TOKEN_TO_BE_REPLACED

‘What Will You Carry With You?’ Remarks From UVA President Jim Ryan END_OF_DOCUMENT_TOKEN_TO_BE_REPLACED