Virginia Folklife Program Knows ‘National Treasure’ When It Hears It 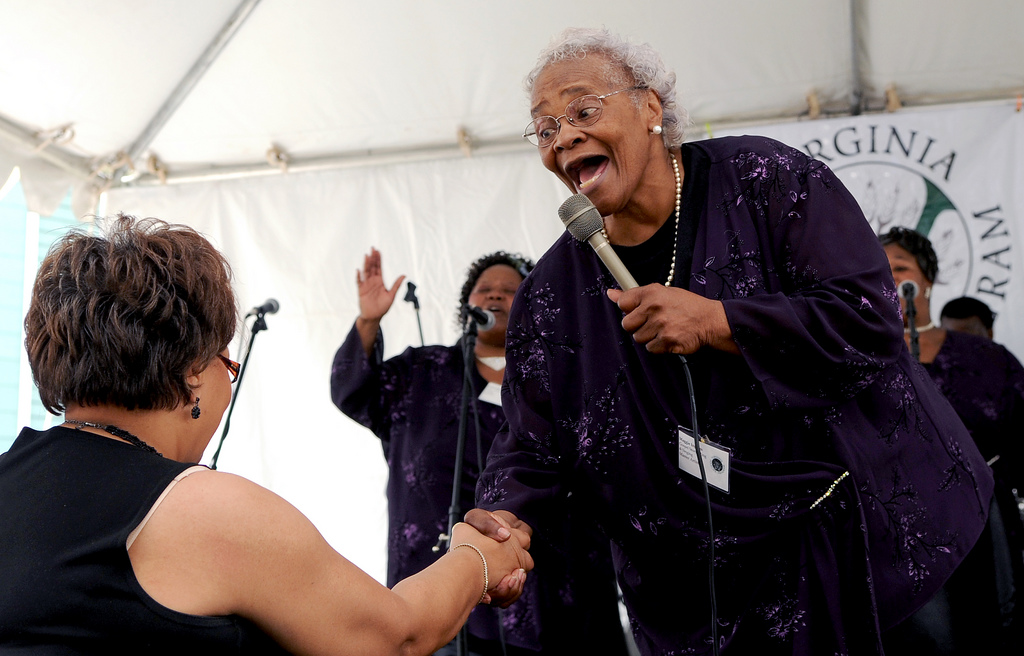 Nothing calms the spirit like music, especially gospel. And one artist in Virginia, who celebrated her 83rd birthday July 4, is considered “queen” of the genre.

She’s evangelist Maggie Ingram, who’s not only known for her voice and message, but for her community service.

Jon Lohman, director of the Virginia Folklife Program, recognized the significance of Ingram’s work and set out to record it.

Ingram is “a true national treasure,” said Lohman, whose program is part of the Virginia Foundation for the Humanities, based at the University of Virginia.

“She has been a stalwart of Richmond’s gospel music scene and African-American cultural life since her arrival 50 years ago,” he said. “Her life is a testament to perseverance and community service. Her current group, ‘The Ingramettes,’ composed primarily of family members, is incredibly powerful.”

The Virginia Folklife Program is dedicated to the documentation, presentation and support of Virginia’s rich cultural heritage. It was established in 1989, with support and funding from the Virginia Commission for the Arts and the National Endowment for the Arts’ Folk Arts Program, a collaborative effort initiated by the Virginia Folklore Society.

One of its programs is the Virginia Folklife Apprenticeship Program, which pairs an experienced master artist with an apprentice for a one-on-one, nine-month learning experience, to help ensure that a particular art form is passed on in ways that are conscious of history and faithful to tradition. Maggie and one of her daughters, Almeta, participated in the 2009-10 program. Almeta used her apprenticeship to record the story of her mother’s life.

Since then, “we have presented Maggie and the Ingramettes at numerous festivals across the state,” Lohman said. “We chose to record the CD live at the Fifth Baptist Church in Richmond, in front of Maggie’s own and others’ congregations.”

Lohman’s instincts were spot on regarding “Mama Ingram.” The CD project he led, “Live in Richmond: Maggie Ingram and the Ingramettes,” is nominated for the Independent Music Award’s Gospel Album of the Year, which Lohman calls “quite an honor.”

In addition to industry-determined winners, music fans from around the world have until July 19 to cast their votes at The IMA Vox Pop Jukebox to determine the fan-selected program winners whose music will be promoted to nearly 1 billion music fans worldwide, according to Lohman. (Read more about the competition here.)

Working with Ingram and the Ingramettes on this project was “wonderful,” Lohman said. “An interesting thing is that Maggie has early onset of Alzheimer’s. When you talk to her off-stage, you can definitely tell. But when she gets on stage, she completely locks in. My favorite part of the show is during ‘Working for Jesus,’ when the Ingramettes get her up and they all start pantomiming work – digging with imaginary shovels,” he said. (Watch their performance at the end of this video.)

“Working for Jesus” and “Standing on the Promises of God” are fan favorites, Lohman said of the band’s work, which is largely a family affair. In addition to Almeta Ingram-Miller, Cheryl Beaver, another Ingramette, is her granddaughter, and several members of the rhythm section are relatives as well.

The Virginia Folklife Program’s live recording of Ingram and the Ingramettes was released Dec. 14. Produced by Lohman for Virginia Folklife Recordings, which he also directs, the album features classic Ingramette songs “Help is on the Way,” “Wide River,” “When Jesus Comes,” “A Tribute to Martin Luther King, Jr.,” “The Family Prayer,” “Conferring of Honorary Doctorate Degree on Maggie Lee Ingram,” “Standing on the Promises of God,” “Praise Break” and “Work Until I Die.”

This CD is for anyone who loves gospel music or cares about preserving the musical traditions of Virginia, Lohman said.

The project was funded from a variety of sources, including the National Endowment for the Arts and private donations. The majority of CD sales have been in the city of Richmond, Lohman said, and all proceeds thus far have gone to “The Ingramettes.”

“We would love to have more people aware and supportive of this CD,” he said. It is available online, through the UVA Bookstore and at the Plan 9 music store.

Ingram is a self-taught musician, who also taught her children to sing and play. The Ingramettes have performed for more than 50 years at such illustrious stages as the Kennedy Center and the National Folk Festival. But …

That’s what Ingram said in February in a Virginia Living magazine article. And in her life, she has walked the talk.

According to the article, liner notes written by Don Harrison on the Virginia Folklife Program’s “Live in Richmond” album, and a Kennedy Center bio, Ingram …

• … may be known in Richmond as much for her red van as for her singing. For years, she drove it around town dispensing free food to the needy, and hauling visitors to prison as part of the family day events she helped establish in Virginia correctional centers through legislation she initiated.

• … turned her home into a halfway house for women released from prison – “my babies,” she called them – as they re-entered society and the workforce.

• … became an ordained minister in the early 1980s. (Her children have followed in her footsteps, Christine was ordained in 1995 and Almeta in 2003).

• … received the prestigious 2009 Virginia Heritage Award for lifetime of excellence in the folk and traditional arts.

• … was awarded a doctor of music degree from Virginia Triumphant College and Seminary in 2011.

Ingram was born July 4, 1930, on Mulholland’s Plantation in Coffee County, Ga. As a child, she worked in the cotton and tobacco fields with her parents. At 16, she married Thomas Jefferson Ingram, also a sharecropper from Georgia. They had five children: John, Lucious, Tommie, Almeta and Christine, and moved to Miami, Fla.

After her husband left the family and returned to Georgia, Maggie Ingram moved to Richmond. She arrived on Christmas Eve 1961, “in that little green-and-white ’56 Chevy with her five little children,” Almeta recalled in the liner notes of the “Live in Richmond” CD.

Ingram first found employment in the home of an energetic attorney, Oliver W. Hill Sr., who at the time was working on behalf of Virginia plaintiffs in what would become the landmark Brown v. Board of Education case.

Years later, the Queen of Gospel turned down an invitation from the Godfather of Soul to tour with his band, telling James Brown, “We don’t sing rock ’n’ roll.”

Ingram and her Ingramettes will be performing this summer and fall, including an Oct. 13 stop at the Richmond Folk Festival; their touring details are here.

“Whether sung or told, handcrafted or performed, Virginia’s rich folklife refers to those ‘arts of everyday life’ that reflect a sense of traditional knowledge and connection to community,” Lohman said.

Robert Vaughn, president of the Virginia Foundation for the Humanities, said, “The Virginia Folklife Program is the only state folklife program grounded in the humanities, engaged in research, scholarship and teaching, as well as in documentation, publication, public performance and education. In short, it’s comprehensive, involving extraordinarily diverse artists and audiences.”

Lohman, who’s been at his job since 2001, “is simply the finest folklorist and folklife director in the nation,” Vaughn said. “He’s also in demand internationally.”

A Year We Will Never Forget: 2019-20 in Review END_OF_DOCUMENT_TOKEN_TO_BE_REPLACED

‘What Will You Carry With You?’ Remarks From UVA President Jim Ryan END_OF_DOCUMENT_TOKEN_TO_BE_REPLACED