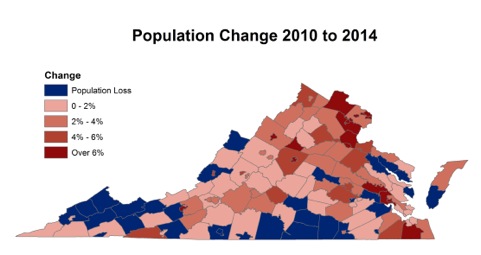 Virginia’s population has increased by less than 1 percent each year since 2010 – the commonwealth’s lowest growth rate in decades. This trend, among others, was revealed in the official state annual population estimates developed, analyzed and released today by the University of Virginia’s Weldon Cooper Center for Public Service. (Find the report here.)

“While the economy is recovering, population growth lags at the state and national levels,” said Qian Cai, director of the Cooper Center’s Demographics Research Group. “People are cautious about having babies, buying houses or making big moves.”

The rate of growth between counties and cities in Virginia reached relative parity since 2010. In contrast to the last decade, in which growth was most prominent in counties, cities make up more than half of Virginia’s 25 fastest-growing localities in this decade.

“Recent trends bode well for most cities,” said Hamilton Lombard, the center’s research specialist, who prepared the estimates. “While the growth rate in counties has slowed, the rate in cities has caught up, mirroring a trend of urban growth both in Virginia and nationwide.”

Despite the economic effects of the federal budget sequestration, Northern Virginia continues to account for nearly three-fifths of the commonwealth’s population gain, with eight of the 10 fastest-growing localities located there. The city of Charlottesville and New Kent County are the only exceptions.

The slowing pace of population growth is most evident among counties adjacent to or beyond the state’s metropolitan areas. Due to lower birth rates and older populations, localities outside metro areas had at least 8,200 more deaths than births since 2010. While migration into the state helped to mitigate population loss, Virginia’s non-metro population is stagnant, adding only 2,230 people between 2010 and 2014.

The Cooper Center’s population estimates, prepared annually, are the official figures for the commonwealth of Virginia. The estimates are based on changes since 2010 in housing stock, school enrollment, births, deaths and driver’s license issuances. They are used by state and local government agencies in revenue sharing, funding allocations, planning and budgeting.

Q&A: Assessing the Risks and Rewards of Pelosi’s Plan to Visit Taiwan END_OF_DOCUMENT_TOKEN_TO_BE_REPLACED

These Giant Wind Turbines, Inspired by Palm Trees, May Be the Future of Renewable Energy END_OF_DOCUMENT_TOKEN_TO_BE_REPLACED