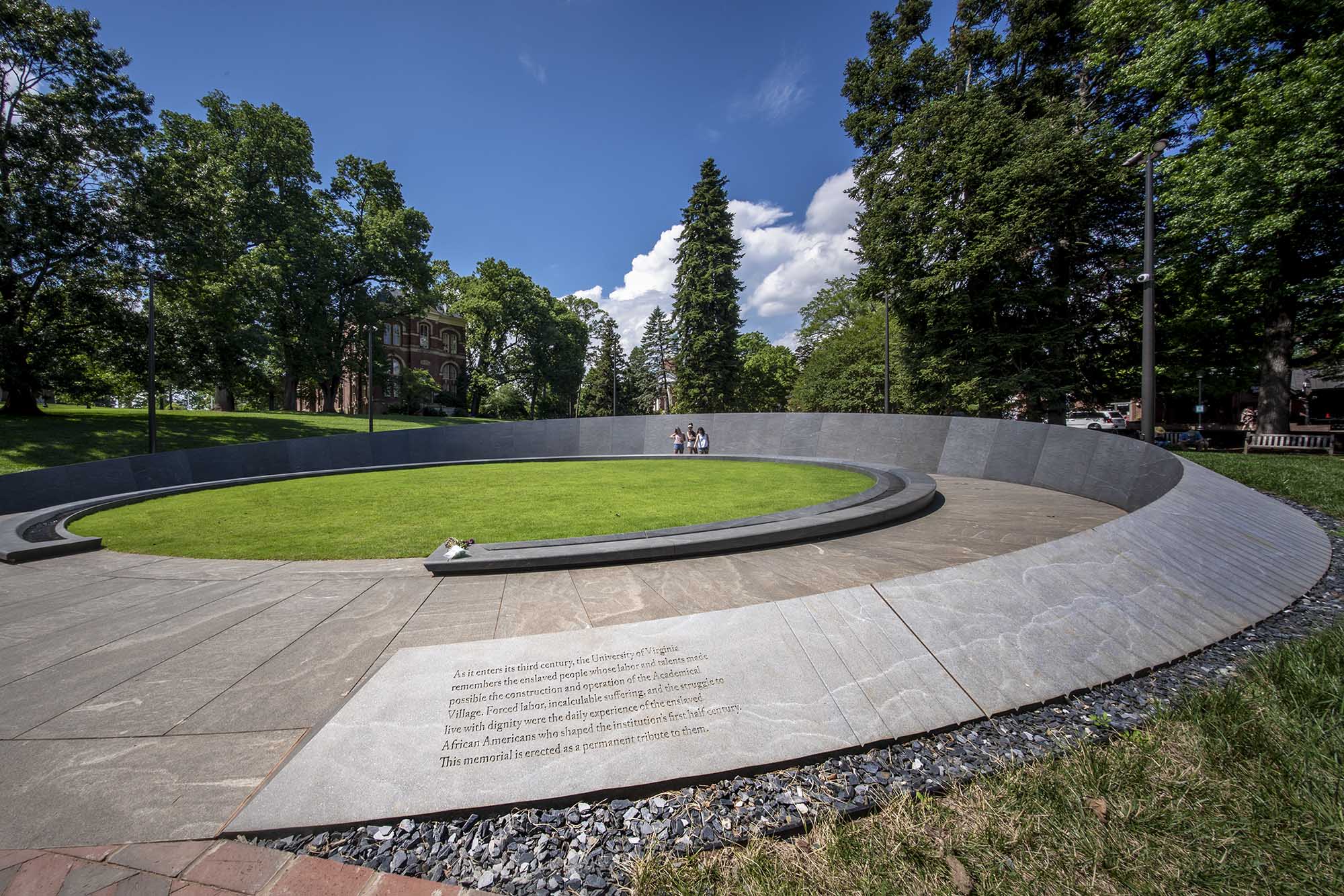 The Memorial to Enslaved Laborers is located not far from the Rotunda and within the footprint of UVA’s UNESCO World Heritage Site. (Photo by Sanjay Suchak, University Communications)

As workers applied the finishing touches to the University of Virginia’s Memorial to Enslaved Laborers early last year, the coronavirus pandemic cancelled the plans for a spring dedication event that would bring people together.

A year later, a virtual ceremony, free and open to the public, will be held Saturday to honor the legacy of the estimated 4,000 enslaved people who built and maintained UVA between 1817 and 1865.

The official dedication ceremony will be broadcast at 11 a.m., featuring a range of speakers, including alumni who first proposed the idea for the memorial, descendants of the enslaved, students giving a spoken word performance and UVA leaders and others who’ve worked on and supported this project.

Later that evening, the a capella group Take 6 will perform a concert online at 7 p.m. Originally from Huntsville, Alabama’s Oakwood College, where the group formed in 1980, Take 6 – with the six original singers – has won 10 Grammy Awards, two NAACP Image Awards, 10 Dove Awards and more.

The performance is presented by the UVA IDEA Fund, a group of alumni and friends formed in 2010 to advise and support the University’s Division of Diversity, Equity and Inclusion. (IDEA stands for “inclusion, diversity, equity and access.”) There will be a Q&A session with Take 6 after the concert.

Viewers can watch the events live or access a recording afterward on the University-affiliated platforms: this Live Streaming page or Facebook page.

In addition, on Friday evening, the Descendants of Enslaved Communities at UVA will hold the group’s first public event, a virtual panel discussion on descendant communities in Virginia. It will feature Andrea Douglas, director of the Jefferson School African American Heritage Center and co-chair of UVA’s President’s Commission on the University in the Age of Segregation; Jody Allen, director of the Lemon Project at the College of William & Mary, which addresses that school’s history with slavery; and Michael Blakey, a William & Mary professor who serves as a scholarly adviser to the Montpelier Descendants Committee.

For information and to register for the free event, visit https://www.descendantsuva.org/events. You do not need to be a descendant to attend. There will be a brief session afterward for descendants only.

Located near the Rotunda within the footprint of the UNESCO World Heritage Site, the Memorial to Enslaved Laborers is a product of years of advocacy and research from students, faculty, staff and community members, as well as the President’s Commission on Slavery and the University. UVA and community groups, including descendants of the men and women the memorial honors, gave input and feedback on the design, including the IDEA Fund.

The Office of the Architect for the University, along with Boston architectural firm Höweler+Yoon, led the design process starting in fall 2016. They teamed with Frank Dukes, co-founder of University & Community Action for Racial Equity and Distinguished Institute Fellow of the Institute for Engagement & Negotiation in the UVA School of Architecture; alumna Mabel O. Wilson, a cultural historian and designer at Columbia University; and Gregg Bleam, a landscape architect who has taught at UVA and worked in and around the Grounds for about 30 years. Artist Eto Otitigbe from Brooklyn, New York, designed the artwork of the exterior wall. UVA’s Facilities Management and Team Henry Enterprises developed the site and constructed the memorial, with assistance from the Quarra Stone Co. in Madison, Wisconsin.

Archival research, most of it from UVA’s own collections, has uncovered almost 600 names of enslaved workers who were rented to the University, according to Kirt von Daacke, co-chair of the President’s Commission on Slavery and the University when the memorial process started. Their names – often just a first name and in many cases, just an occupation such as “blacksmith” – are etched into the stone.

The official dedication ceremony on Saturday will begin with a welcome and invocation from Rev. Alvin Edwards, pastor at Mt. Zion First African Baptist Church. Twelve speakers will give remarks about the process that led to the memorial’s creation and what it means to them.

President Jim Ryan has said, “As a symbol, the memorial calls on us to bear witness to the lives of enslaved people at the Academical Village and pay homage to their memory. And as a beacon, the memorial points us in the direction that our University community aspires to reach, where all people are equally valued, respected and included in their everyday lives on Grounds.”

Here is the roster of participants.